Triple J radio personality Lindsay ‘The Doctor’ McDougall has long had the ability to divide the station’s audience. Off the back of this weekend’s Splendour In The Grass coverage, a large group of listeners have publicly dennouced the radio host on Facebook, calling for an end to his ‘douchebaggery’ (their word, not mine).

A message posted by a facebook user on Triple J’s page on Monday afternoon was addressed to The Doctor, criticising his involvement with Triple J as a hindrance to ‘an otherwise great radio station’. The passionate facebooker signed off on behalf of ‘The Entire Australian Population’, creating an open invitation for Triple J’s facebook fans to have their own say on the matter.

Opinionated fans and internet trolls alike rallied behind the message, clicking up almost 10, 000 likes and hundreds of comments at last view. 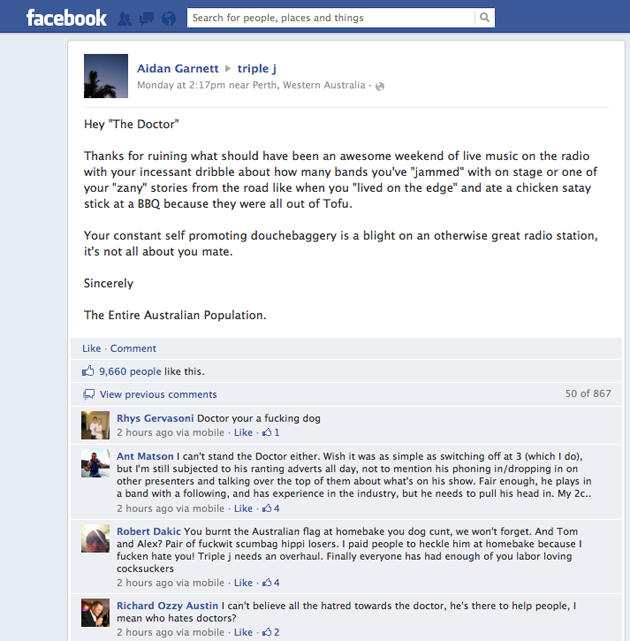 As the lead guitarist of Aussie punk rock band Frenzal Rhomb, Lindsay was heavily involved in the music scene prior to his radio gig, a fact that some fans feel he continually promotes on-air. He started work with the national youth station in 2005, alongside fellow band member Jason ‘Jay’ Whalley. His radio career has seen him work with the likes of Myf Warhurst, Marieke Hardy and Robbie Buck. He currently hosts the Drive show on weekday afternoons.

Whilst the original post (pictured above) appears to have since disappeared from facebook, many other Doctor-centric posts have littered the Triple J page. These vary in opinion from those who support the Doctor right through to those who have vowed to order a meat pizza every time they hear the avid vegan and animal rights activist on air.