With the bumper Splendour in the Grass festival selling out in no time, those who couldn’t secure tickets – or indeed, those who can’t get to Byron Bay – were left with the option of picking from the bumper crop of Splendour Sideshows that dropped late last week.

One of the hotter tickets of the bunch was for the pair of shows from once-again-reunited noise rock behemoths At The Drive-In. The Texas icons are set to play a pair of “intimate” shows in Melbourne and Sydney, at the comparatively undersized Forum and Enmore theatres respectively.

Touring promoter Secret Sounds announced that “pre-sale” tickets would be made available to punters who signed up for their mailing list. This allotment went on sale at 10am yesterday and, unsurprisingly, sold out quick smart.

The remaining ticket allocation, designated for the “general public,” was scheduled to go on-sale at 9am this morning. Reports as to how long they lasted are conflicting, but the general consensus is that the shows sold out by 9:07am at the absolute latest; anecdotal evidence suggests they may even have been gone by 9:01am.

And here’s where the story gets murky.

Immediately following both shows selling out, tickets began appearing on Ticketmaster‘s own resale site. And at hugely inflated prices.

Ticketmaster Resale doesn’t place caps on the amount resellers can charge for their tickets, but they do maintain an outward air of honour about how the system is *supposed* to work. 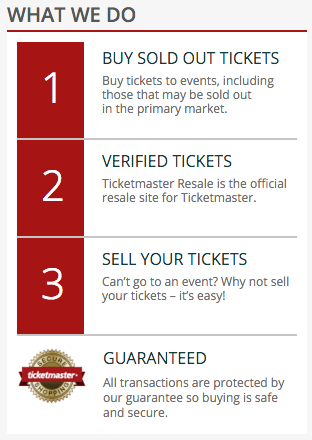 The reality that punters faced this morning, however, was much different. In some cases, tickets for the shows were being sold at as much as $458 per ticket for the show in Melbourne.

.@Ticketmaster_AU Event sold out 9:01am. Instantly you offer I can find “resale” tickets for twice the price. That’s legitimised scalping.

Punters after tickets to the show at the Enmore are facing a similar situation, with Ticketmaster Resale currently flooded with tickets all marked up well over two-times the original $90 ticket price. 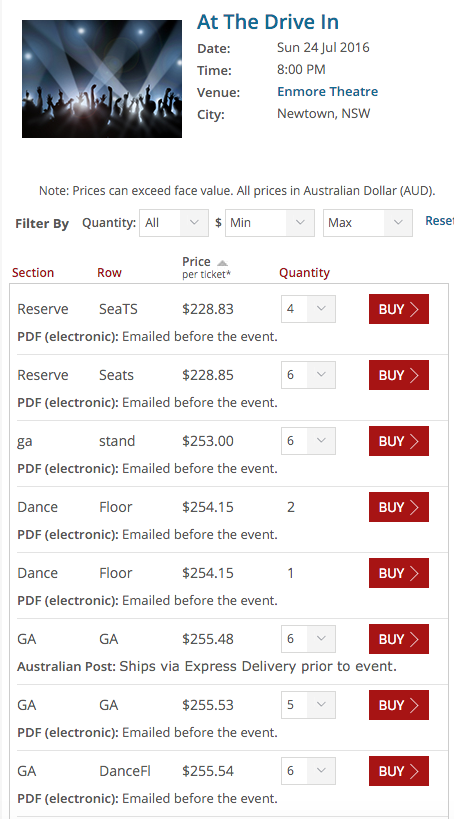 Punters who missed out on tickets have been miffed at what’s being labeled as “legitimised scalping” by Ticketmaster.

Nice one @Ticketmaster_AU. Scalpers bought all the Melbourne At The Drive In tickets in 30 seconds and are already selling at double price.

@Ticketmaster_AU How can At The Drive In tix be up for resale at $165 straight after they sell out? Legalised scalping? @acccgovau

Someone sell me ATDI tickets for less than $150.

@AtTheDriveIn Tickets were on sale, but sadly most got taken up by scalpers and offered via Ticketmaster’s official resale for double price.

In fact, in most cases tickets being listed on eBay are going for less than the tickets listed on Ticketmaster’s own resale site. 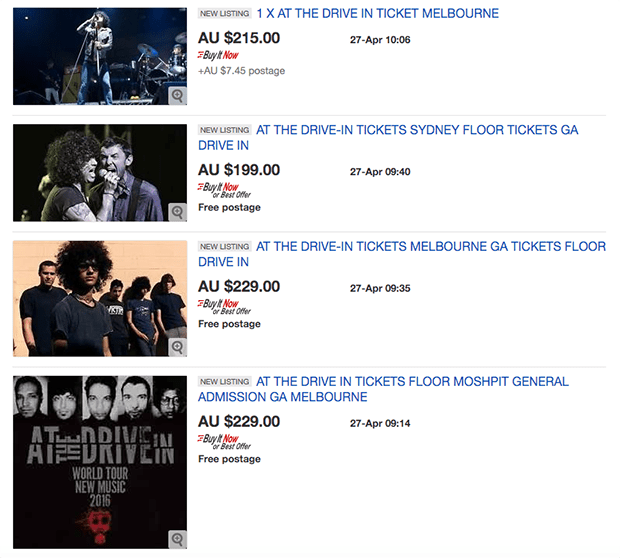 And if you thought this whole shemozzle couldn’t get even more interesting/ridiculous, you’d be wrong.

Touring promoter Secret Sounds has officially asserted that Ticketmaster Resale is not an authorised seller, and is actively encouraging punters to not purchase tickets through the service as their validity cannot be guaranteed.

Even though, and this point we are repeating, Ticketmaster Resale‘s customer statement contains a supposed “guarantee” assuring users that buying is “safe and secure.”

If the promoter and the ticket merchant can’t get on the same page as to whether or not the services are legitimate, what bloody hope do the punters have of actually getting in the door?

Ticketmaster has never been without criticism, and the ticketing industry by and large has always been subject to scalping. But if providing a sanctioned scalping service is all the company is doing to prevent ticket scalping, then serious questions need to be raised about their customer relations.

It’s a goddamned music gig. It shouldn’t cost the world to get in.