Iconique British girlband Sugababes have announced an Aussie tour for February 2023 and my head is spinning round round with excitement.

ICYMI: the original line-up — comprising of Mutya Buena, Keisha Buchanan and Siobhan Donaghy — have reunited for the first time in over two decades.

The band has changed up members quite a few times over the years but they’re finally back to the OG three who you’ll remember from tracks like “Overload,” “Run For Cover” and “Soul Sound”.

Buchanan was the last remaining band member but was reportedly booted from the group and replaced in 2009.

“I’m sad to say that I am no longer a part of the Sugababes. Although it was not my choice to leave, it’s time to enter a new chapter in my life,” she said in a statement at the time.

“Sometimes a breakdown in communication and lack of trust can result in many different things.”

Although the new trio planned on releasing a new album, they ultimately disbanded, leaving the great Sugababes name in limbo.

When the three OGs reunited, they underwent a legal battle to retrieve the band name that they created as teenagers way back in 1998.

They were initially knocked back and therefore opted for the simple band name of Mutya Keisha Siobhan.

After continuing the legal fight, they ultimately won the Sugababes name back, as they bloody well should have.

Sugababes are one of the biggest-selling British girl groups of all time, with six number one UK singles, millions of global sales and multiple multi-platinum albums.

Their reunion has been met with mass praise from fans and critics and I can’t wait for them to touch down on Aussie soil.

The gang will perform at Enmore Theatre in Sydney on Thursday 23 February, Margaret Court Arena in Melbourne on Friday 24 February and Fortitude Music Hall in Brisbane on Monday 27 February. 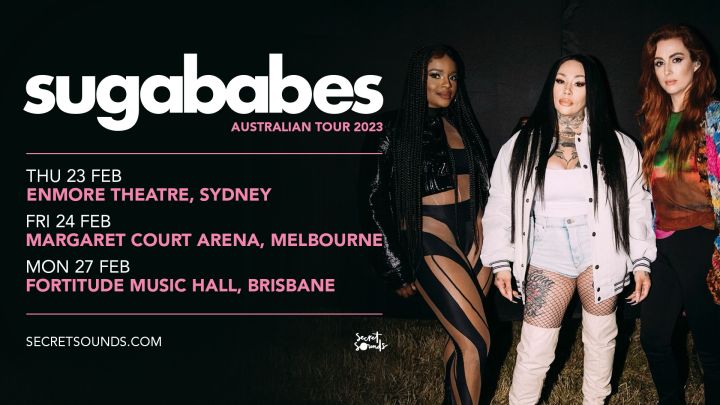 Push the button and nab your tix!