Ah, Splendour In The Grass. That lovely weekend escape where we’d just bail out of our lives and responsibilities for a few days and instead bask in the sunshine of Byron Bay, boogie along to a bunch of incredible artists, and people-watch by the fire. We’ve been hitting Splendour for years now, so now that we’re not all there together, with you, with us, with everyone, we thought it’d be a good time to reminisce back on shit that’s gone down over the years.

Because good lord there has been some shit that has gone down.

From celeb-spotting to Tina Turner just showing up out of nowhere to melt faces TWICE, here are our favourite moments of Splendours gone by.

1. The Veronicas’ Trap Remix Of ‘Untouched’

Whispers were HOT amongst the punters and backstage alike when someone let on that Allday might be bringing The Veronicas to the stage in 2019. And not only did he do that, but they all performed their huge hit turned meme (?) turned literal balls-to-the-wall banger, ‘Untouched‘.

But it wasn’t your run-of-the-mill 2000s pop version, oh no. Oh good lord no. The trio chopped and flipped the whole thing, turning it into a trap remix of the 2007 smash hit, turning the Mix Up tent on its head and destroying everyones brains in the process.

My jaw was on the floor, it was INCREDIBLE.

2. Wolfmother Absolutely Ripping The Lid Off In…2019?

One of the best things about Splendour is that sometimes you’re taken entirely by surprise, and wind up having an absolute ball in a set you didn’t think would move the marker. In 2019, that set belonged to none other than Wolfmother, who ripped the lid off on day one, setting the bar for the rest of the weekend.

Not even just on day one, but in the AFTERNOON on day one. That is no mean feat, my friends.

I remember sitting backstage between interviews and hearing this almighty roar from the main stage, looking over at my colleague and Festival Dad Cam Tyeson, looking at the set times to see who was riling everyone up out there, and whispering “my fucking god, it’s Wolfmother.”

That was insane! Thank You Splendour and everyone who came out today, what a way to finish off our tour back in Byron! #wolfmother #jokerandtheyhief #splendourinthegrass

The Splendour weekender is a long, tough slog sometimes, and you’ve really gotta pace yourself. Every morning backstage we join the dusty musicians, crew, and other media in stretching out in the sun with a Berocca or a Bloody Mary (or both) and watch the punters slowly start to filter in, equally as dusty.

Back in 2017, Lil Yachty seemingly went against all the multi-day festival rules, and we spied him out the back looking absolutely spent on Day One, gripping a giant Kermit The Frog toy.

4. When We Spotted Elon Musk & Amber Heard Canoodling In The Gold Bar

Probably one of the biggest spit-takes I’ve ever done in my life was when I was charging through the Gold Bar to get backstage and I spied an incredibly familiar face, tucked away in a booth. It was Elon Musk, who had ducked in to visit the festival with his then-girlfriend, Amber Heard. You could almost hear the ripple of whispers through the crowd when they were spotted late in the evening, schmoozing in the VIP bar and waiting for LCD Soundsystem to start.

I remember trying to use my phone at one point as I was walking past their booth (for a sneaky photo to brag to my mates, obviously) and the whole thing bricked itself. Now I’m not saying that Elon, the huge tech nerd and billionaire, had some kind of phone-scrambling perimeter set up around him for privacy, but I’m not not saying that, either.

5. The Year The Avengers Rolled In

Celeb-spotting is basically an Olympic sport at Splendour. Every year seems to attract some kind of hot-to-trot celebrity type we’re so used to seeing on TMZ or in pap shots from Hollywood, and it’s definitely like uncovering some kind of Easter egg when you clock a Big And Famous Person having a boogie in the amphitheatre or something.

A few years back we clocked Chris Hemsworth, Mark Ruffalo, and Taika Waititi hooning around the festival, and managed to get a couple of Definitely Not Obvious photos with them in the background. Look. LOOK. 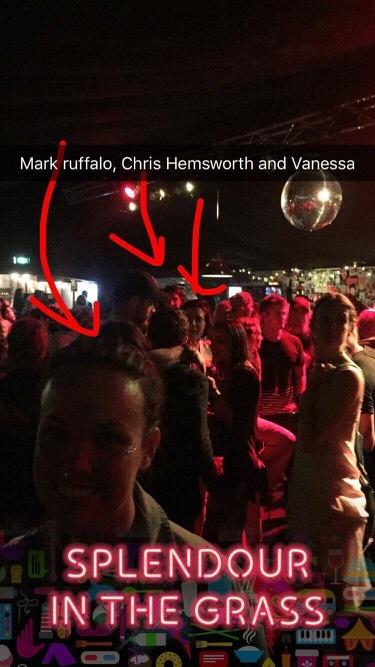 I reckon if Splendour was on this year, old mate Zac Efron would be quietly having a beer in the Gold Bar for SURE.

6. When It Was Tina Arena’s World & We Were Simply Living In It

For two years running, the queen her self Tina Arena just like…showed up with no warning to belt out some of her biggest hits. First, she appeared in 2017 with Client Liaison to smash through ‘Sorrento Moon‘. We also spied her preening the CL lads backstage like a nervous mum fussing over her children, which was adorable.

Then she backed it up the very next year to set everyone off with a duet with Matt Corby, performing her iconic hit, ‘Chains‘.

We were simply not worthy of being in the presence of royalty, but God did we love it.

The year Lorde returned to the main stage (this time on her own accord and not to fill the shoes of someone like Frank Ocean), it was glorious. She owned that stage like she’d built it with her own two hands, and even when the top half of her iridescent costume tried to yeet itself off her body in front of tens of thousands of people, she navigated it like a champion.

I can tell you right now if that had been me, everyone in that amphitheatre would have 1000% seen my norks.

As is tradition when the crowd has to entertain themselves for more than ten seconds, everyone erupted into a rendition of Mr Oizo‘s ‘Hey Baby‘.

Lorde at Splendour In The Grass 2018

Not even a wardrobe malfunction could stop Lorde from headlining Splendour in the Grass.

8. When Peking Duk Took It Straight To The Pool Room

Does this one even need any explanation? Splendour is arguably one of the biggest stages in the country and on the Aussie festival calendar, so artists tend to pull out the big guns for them.

Back in 2017 (what was with that year?) Peking Duk took us down to Bonnie Doon with an incredible set-opener from the hole-digging legend himself, Dale Kerrigan.

9. When We Asked Influencers About Insta Yoinking Away Like Counts

A couple of years back, Instagram committed a cardinal sin and removed like counts mere hours before one of the biggest dates on any Aussie influencer’s calendar – Splendour.

With this major content crisis in mind, we set out amonst the punters, selfie takers, and Insta boyfriends to see how they all felt about the knock to their ~personal brand~ and what it meant to them and their business.

If you know festivals, you’ll know that not all the gold is found on the stage, or in the Gold Bar. It’s amongst the punters, the people who find their creativity flourishes with group costumes, and little performances dotted around the place. They’re not on the lineup or anything, it’s usually just some dumb joke that has gone so far it winds up getting others involved.

Sometimes it’s a made-up cult that worships a mate who couldn’t make it to the festival, and other times it’s this religious service at the back of the hill, dedicated entirely to our lord and saviour of Freo, Kevin Parker. You know what? The less I know the better, I reckon.

11. That Time We Counted Down Everyone You Meet At Splendour

After a few runs around the Splendour track, you begin to notice patterns. The routine of berocca, coffee, beers in the morning. The timing of people running between stages. The correlation between the sun setting and the hoon levels rising. And the very specific people you meet within the bounds of the festival.

Very funny man Alan Tsibulya ran through the alphabet of these types with us, which is forever one of my favourite comments on festival people.

A – Z Of People You See At Splendour

Brought to you by the letters L-I-T. (And our mate Alan Tsibulya).

12. When We Spotted Daniel Johns Just Living His Best Life

Yet another double-take I have done backstage at Splendour was when I walked past some bloke in a really tatty white bathrobe on night one, before realising he was Aussie grunge/music legend, Daniel Johns. We were in the presence of royalty, my friends.

Daniel was there to perform with What So Not – which wasn’t until Sunday night, no less – but the pair spent the weekend haunting the backstage area, and getting on the tins with a few folks.

Being a goblin on the cans with @danieljohnshq and @whatsonot

If you’re missing the Big Byron Boog like we clearly are, and want to help make sure it comes back bigger and better than ever in 2021, you can help support the festival crew (the legends who build the whole mini-city in the Byron parklands every fkn year) with some limited edition once-in-a-lifetime merch over at the Splendour website.

And then scroll back through all your photos your phone has in that ‘This Time Last Year’ folder and have a little cry. We’re there with ya, buds.