When the Aussie music scene delivers, it really delivers. It’s almost as if doing things in halves just ain’t an option and we’re damn well here for it.

If you haven’t already heard (oh, the shame), PEDESTRIAN.TV, together with our pals Swarovski, have decided to recognise the best moments in Australian pop culture – including those standing out in the music industry, by throwing The Inaugural ‘PEZZYS’.

They’re basically a swanky-as-heaven awards night where we’ll be giving the much-deserved love to things that went on throughout 2017. There are eight categories (each with five nominees for a PEZZY) that’ll share the spotlight during the evening which, when viewed collectively, form quite the comprehensive cross-section of the happenings in Australian pop culture not too long ago.

It’s on Feb 28th, so we need your help to make sure the right person takes home the gong. Without further adieu, here’s who we’re nominating for the “Guitar Hero” aka Music category.

In late 2017, women in Aussie music released an open letter detailing stories of inexcusable harassment + sexual misconduct perpetrated on them by prominent men in the industry. It flew under the simple-yet-stark banner of #meNOmore, and served as a foot-down moment against predatory men in the local music industry.

Gang of Youths? More like Gang of Dominating The Last 12 Months, am I right? Always. The group took out the ARIAs for not just Album of the Year, but also Best Rock Album and Best Group, which is a pretty sweet thing to be able to add to your year’s achievement.

Also, did you listen to the Hottest 100 this year? They had bloody four tunes in there: Let Me Down Easy, The Deepest Sighs The Frankest Shadows, What Can I Do If The Fire Goes Out and Blood (The Middle East cover for Like A Version).

Melbs trio Camp Cope took aim at Falls Festival for booking a lineup featuring a measly number of nine women, during their industry calling-out tune The Opener at the Byron Bay edition of the event.

This prompted Falls Festival organisers to issue a statement, saying things like, “Whilst we have a very conscious and strong agenda to book female talent, it isn’t always available to us at that headline level.” Mmhmmm. Youth broadcaster Triple J confirmed it would officially move the date of the Hottest 100 countdown, after a lengthy consultation process regarding shifting the list away from the increasingly controversial Australia Day.

The station confirmed the countdown will be moved to the fourth weekend in January from this point on, kicking everything off this year on Saturday, January 27th. 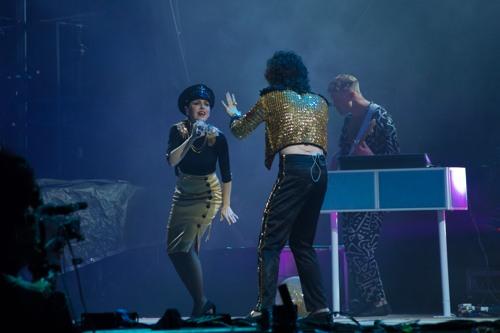 Pastel and polyester party purveyors Client Liaison brought out none other than Tina bloody Arena during their Splendour set, to rip into hits ‘Teardrops‘, ‘Foreign Affair‘ and ‘Sorrento Moon‘.

These blokes aren’t in the business of doing things by halves. Should we even be surprised? Didn’t make it any less amazeballs, though.

OH THE CHOICES. Vote for your fave below.