Byron Bay metalcore heroes Parkway Drive have snuck into the top 20 hardest working bands of 2010 list. The statistic reaffirms the bands longstanding international presence after developing one of the country’s most loyal fan bases.

But what are the determining factors for how hard a band has worked? According to the Digital Music News survey, the two relevant criteria are: how many times your name has appeared on a bill, and the amount of miles you’ve notched up – be it in a marijuana hazed tour bus, or in the luxury of a Qantas Economy seat (exit row of course).

In 2010, Parkway Drive graced 120 stages and chewed through 87,000 miles, putting them in 19th position behind the likes of Lady Gaga, Willy Nelson, Two Door Cinema Club and Kevin Rudd. 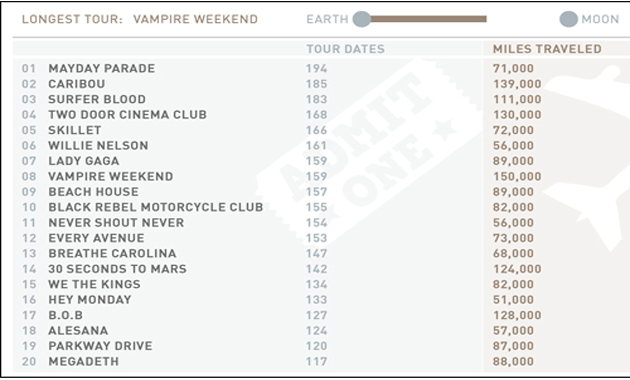 Vampire Weekend lead the distance race amassing an amazing 150,000 miles. To put that in perspective, the band would have made it half way to the moon – or a third of the way up Charlie Sheen‘s coke pile.