The cool thing about tattoos is they can be pretty much anything you want. One of mine is a dumb thing I saw on the internet once, another is a cartoon that my partner drew on the back of a receipt at a bar back when we first started dating. You can do whatever you want, all that matters is that it brings you some sort of joy to do so. I wouldn’t dream of telling recording artist and producer Moby what to do with his own job. What he decides to permanently inscribe upon himself is his own choice, and I must respect that. Even if they look like absolute dogshit.

Moby revealed this work of art to the world back in September, seemingly not convinced that already being known mainly for veganism was not enough: 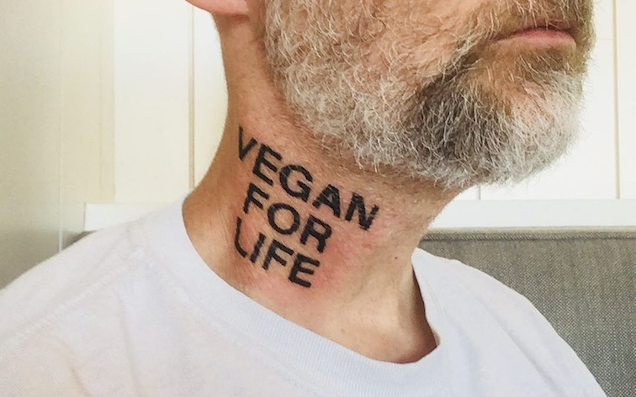 The subtlety of a neck tattoo, however, was also not enough for Moby, who has since gone on to really, really make sure you know where he stands:

The musician posted these presumably yet-to-be-shaded bad boys to his Instagram yesterday, announcing that he got them in celebration of his 32nd veganism anniversary:

As November is my 32 year vegan anniversary i thought i’d get a tattoo (well, technically 12 tattoos) to celebrate. I’m a vegan animal rights activist for many reasons, but ultimately because i believe at the core of my being that every animal has the right to live their own life, according to their own will.

More than one person has remarked on the startling resemblance between newly tatted Moby and living meme Tommy ‘Mr Cool Ice’ Steinberger:

Who wore it better? Moby, or Mr. Cool Ice? pic.twitter.com/TLcObPImvY

And — boy howdy — if you consider yourself a big ‘anagram head’, you’ll get a kick out of what you can do with those arms: