Dwayne Michael Carter Jnr – you would know him better as Lil Wayne – has forced his plane to emergency land after suffering another bout of seizures while in the air.

He was flying from Milwaukee to California when the first seizure occurred, forcing his private jet to land at an airport in Nebraska.

After the plane took off again, it was in the air only minutes before having to make a second emergency landing as he had his second seizure. After this, paramedics treated the rapper on board the plane.

Weezy confirmed he was epileptic in an interview in 2013 after having a public seizure:

“The bad news is, I’m an epileptic, so I’m prone to seizures.

This isn’t my first, second, third, fourth, fifth, sixth, seventh seizure. I’ve had a bunch of seizures; y’all just never heard about it.”

His Instagram is flooded with comments from fans begging him to stop taking drugs, and to start accepting medical attention for his condition. 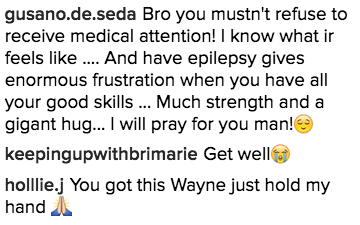