After convalescing in a gilded wheelchair for the past six months following hip and image reconstructive surgeries, Lady Gaga overnight pushed her ARTPOP comeback plan into overdrive with the announcement of the release date for her third musical offering, accompanied by the requisite revolutionary manifesto.

Alongside a photo posted to Facebook and lensed by Inez & Vinoodh, Gaga outlines ARTPOP’s ambitious rollout plan by means of an artist’s statement so convoluted even the most discerning Little Monster taking Year 12 Visual Arts and Design would have a hard time deciphering whatever meaning is extractable from the phrase “reverse Warholian experience”. Admittedly it’s not that cryptic – she wants to bring an art aesthetic to pop, as Warhol brought pop to art – but let’s persist anyway.

ARTPOP is an album-as-app (see Biophilia) due for release on November 11th, the first single from which will be released on August 19th. It purports to “alter the human experience with social media” by creating a “new interactive worldwide community – the auras”. Will this render the pre-existing online community of the Little Monsters defunct? Will they all have to change their Twitter handles to ~†~ARTPOP’s release is then likened to a “BIG BANG!” during which the HAUS OF GAGA will “venge with forte to bring the music industry into a new age”.

Gaga certainly talks a good game, and the credentials of those involved so far are certainly impressive. It’ll be interesting to see if she can deliver on these pretty extraordinary promises or if we’ll be left with another anaemic Born This Way [tour poster].

You can try and decipher the full manifesto below: 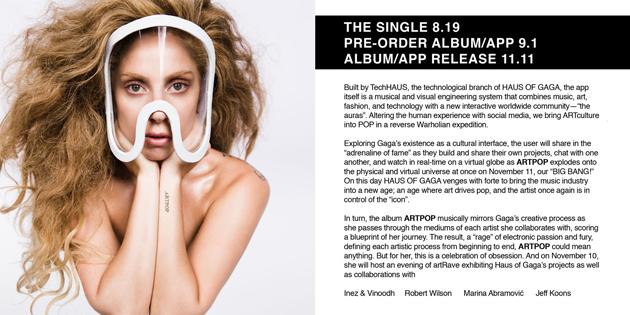