It’s hard to believe, but the 5ft red blooded songstress has been entertaining us for over thirty years now.

She first burst into our homes and hearts in 1986 as tomboy mechanic Charlene Robinson on Neighbours. 20 million British viewers tuned in when her character wed Jason Donovan‘s in what was (and still is) the closest thing Australia‘s ever had to a royal wedding. 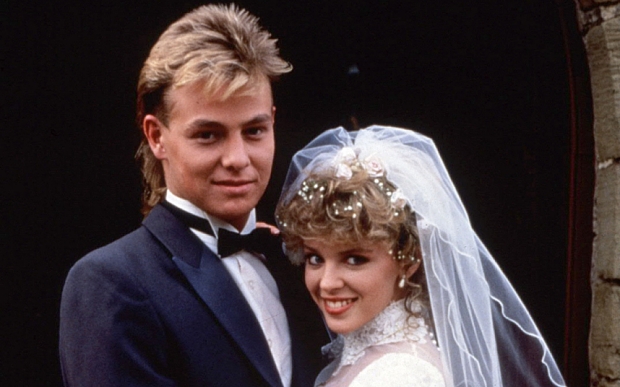 She went on to bang out a fair few late-80s bubblegum pop tunes (Locomotion, anyone?) before shedding her squeaky clean image with a well-timed romance with INXS frontman Michael Hutchence.

But the turn of the century was when Kylie fever really hit.

In 2000, she released Light Years, a disco-inspired record that’s as much of a bop-heavy treat today as it was all those years ago.

Along with it came a string of seriously iconic film clips, including a hot pant-heavy video that sealed her fate as a certified sex symbol.

To celebrate her half century on planet earth, PEDESTRIAN.TV has ranked seven of her most iconic chooners based purely on how quickly they’ll get anyone who’s consumed at least half a Bacardi Breezer onto the dance floor.

It’s your football teams presentation night at the local Dingley RSL. It’s a Saturday night and your whole family has made it out, including Mum. She’s been cradling a lukewarm Jim Beam for the better part of the entire evening. She’s standing on the sidelines of the stuffy bricked function room, stuck in conversation with Tom‘s (lovely but stupid) mum Lesley who has a lot to say about their recent patio renovation.

The DJs choices, including shoddily mixing Dizzy Rascal‘s Bonkers into Kanye West‘s Fade, have left her feeling confused and uninspired.

Suddenly, like a meteor flashing through the night sky, the opening notes of Better The Devil You Know begin to blast through the PA system. She skols her bourbon, kicks off her kitten heels and makes that dance floor her bitch. She’s got her eyes closed and she’s wagging that index finger like you just kicked a ball through a glass window.

(Fun fact: Kylie was actually signed to Mushroom Records following a performing a rendition of Loco-motion at Fitzroy Football Club, so this vignette may well have happened.)

Can’t Get You Out Of My Head is the sonic equivalent of standing on the outskirts of a dance floor, unconsciously tapping your foot and nodding your head while you sip on a vodka lime soda and assess the talent before you.

Sure, you mightn’t be violently crumping, but you’re on the dance floor all the same and that means it deserves a place on this list.

Many of the tunes Kylie banged out at the turn of the century sound very similar, and In Your Eyes is one of them. But who’s complaining? Not I.

If you were a child slash preteen in the mid 2000s, you’ll probably have an extra special spot in your heart for this one because it owned on SingStar. Lawrence R on YouTube nailed our sentiments perfectly with this comment:

Skilfully blending elements of Europop and house music, Love At First Sight copped a Grammy nom for Best Dance Recording. It lost to Dirty Vegas‘ Days Go By and only hindsight can illustrate how much of a mistake that was.

At the time, reviewers described it as “very stylish Euro-flavored dance-pop record that will appeal to all ages,” as well as “a knickers-aloft disco stormer”.

Do you remember when this film clip came out? It blew my 6-year-old brain.

It features Minogue walking through a Parisian intersection, and each time she completes a full circle, a duplicate of her appears through one of the stores, ducking and weaving around the other. By the time the video concludes there are four unperturbed Minogues strolling around amidst an extremely chaotic scene. It was mind-boggling.

The clip, by independent French director Michel Gondry, recieved critical acclaim with one reviewer calling it “arguably the most re-watchable video of the decade”.

Oh, and it did bring home a Grammy for KM. Geddit.

Like Backstreet Boys‘ Everybody, the wind-up before the lyrics hit give you ample time to stop whatever you’re doing and gun it to the middle of the club, Prince Harry style.

Side note: wtf is this film clip? I have literally no idea what’s going on. Kylie is with spies (?), now she’s jumping into a pool in a gown, now she’s making a scene by throwing chips in the air in a casino. It ends with her deliberately smashing a vase before walking down some stairs in her knickers, and frankly, we’re here for it, whatever it is.

Happy birthday, Kylie. We love you.