After news yesterday that Kirin J Callinan had been removed from the lineup of Laneway Festival this year, much speculation has focused on the reason why.

Miss Blanks said on Instagram – and later on triple j Hack – that she had personally complained to Laneway about Callinan’s recent conduct, including the infamous moment he exposed his genitals on the red carpet of the ARIAs last year. Miss Blanks argues that a progressive festival like Laneway, which is committed to being a safe space for all attendees, did the right thing by removing Callinan from the lineup.

RE: Kirin J Callinan being removed from Laneway Festival 2018. – Today at 5:30pm, I’ll be on @triplejhack expressing my views on the removal of Kirin J Callinan from the Laneway Festival 2018 lineup. I believe in the importance of a process of accountability which is why I applaud the organisers of Laneway’s decision to remove Kirin J Callinan from the festival lineup. His long and recent history of reckless and insensitive actions reinforces an entitlement which permits Kirin and others like him to dismiss valid issues, and normalises racism, ableism and sexual assault. Amidst the ‘me too’ discussions, it’s important to see preventative actions as well as support systems. I feel good knowing that Laneway Festival are working hard with their artists, including myself, to create a more inclusive and safe space for its talent, staff, and patrons, as well as the introduction of the 1800 Laneway program.

During the Hack interview, Miss Blanks referred to Callinan’s use of blackface as one of the key reasons she was happy to see him off the lineup. This has caused some confusion among some punters online who weren’t sure what exactly she was referring to. The blackface controversy stems from the album art on the vinyl release of Bravado.

There is also a dick in it, by the way, in case you’re pulling this up fullscreen on your work computer while your boss is standing directly behind you. 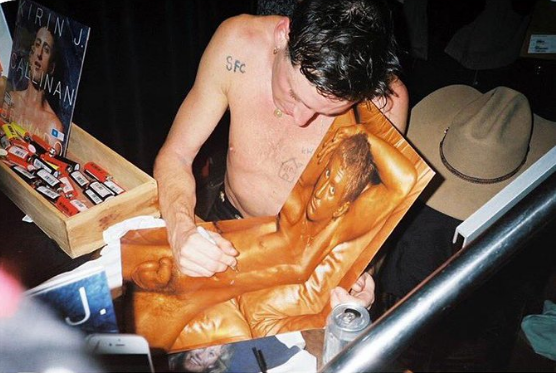 As many Callinan fans will tell you, the intention of this image is not to do blackface – he is dark bronzer, and in true form is satirising the aesthetic of pro bodybuilders and their wannabes, blending into the couch behind him. But considering the fact that Australia seems to be the last remaining place where a blackface controversy seems to happen once a week thanks to people who just do not get it, it’s fraught imagery within its context, and something which demands more care and sensitivity.

The image received some attention on social media last year.

THIS IS BLACKFACE!!! Aussie "progressive" art/music circles need to holds their faves accountable. This shit is not okay. pic.twitter.com/TOZRuhcaXq

This incident, in conjunction with Callinan’s other widely-publicised behaviour, provided the impetus for Miss Blanks to convey her concerns to Laneway. The festival organisers have not commented on Callinan’s removal from the lineup.