Long ago, we passed the time where it was a novelty to write an article on Kanye West and other celebrities deleting and re-activating their social media accounts. Repeatedly, the purge of posts has been a sign of a new creative epoch, the beginning of a new era. Not always.

With this in mind, we come to you with the news that Kanye has returned to Twitter, after deleting it in May 2017. Come with me as we attempt to dive deep into the clues these tweets may or may not reveal. (Please know this is only 30% serious, unless you think I’m onto something. Then it’s 100% real). 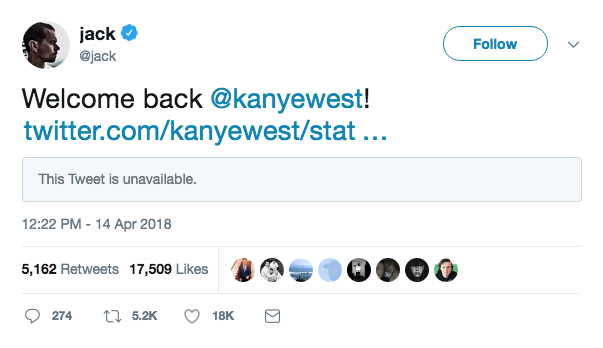 On Saturday, Kanye reactivated his account and got to work deleting any old tweets still on his profile. As with before, he followed one account: @KimKardashianWest, naturally.

He also tweeted once, though it’s since been deleted. Pitchfork report that the tweet was a screenshot of an article about Nike’s new M2K Tekno sneakers with the caption “YEEZY 700 VIBES” with a plethora of emojis. Within minutes, it was deleted.

Start a fire, leave as it burns.

An ouroboros of twitter, the retweet remains but is now hollow of purpose. Jack’s tweet now links to nothing, a ring around nothing but a digital ghost. A reminder that West can – and will – erase things as he pleases.

Beating that other famous resurrection by one day, Kanye rose to tweet again after two days away. Since it’s not our first time at the rodeo, we’re screenshotting, rather than embedding his tweets: they could be gone by the time I publish this.

He was too quick with deleting tweet one, however. According to the Eagle eyes at Pitchfork, it was picture of Die Antwood‘s Ninja wearing a t-shirt with Kanye’s face on it. Why would he delete this? Unknown.

Next up, an image of Kanye’s mother-in-law Caitlyn Jenner poorly doctored onto a white t-shirt, joking it was his favourite merch from his ‘Saint Pablo’ tour in 2016. Considering the Kardashian-Jenner clan’s strained relationship with Jenner, who knows if this is an olive branch or a burn. 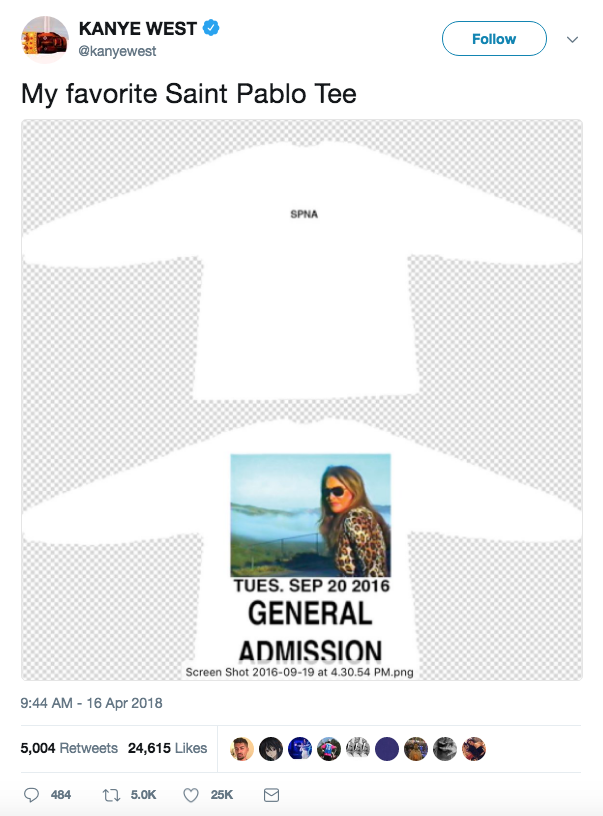 Next up? A caption contest of a boy breakdancing, a la meme accounts trying to gain followers. A reverse-image source doesn’t offer any clues to its origin. I’m failing you all. 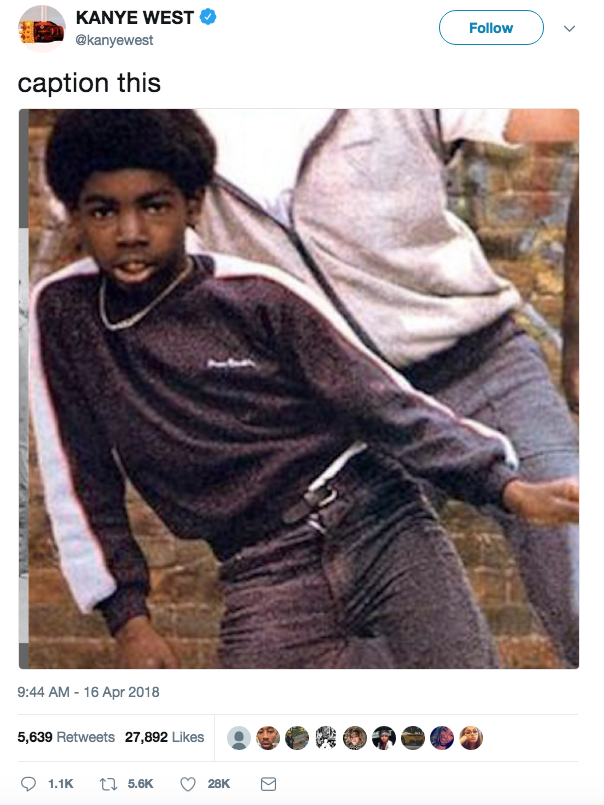 Thankfully, things get a little easier to interpret from here out, starting with a sweet message about his ex-brother-in-law, Lamar Odom.

A photo of the two of them at Madison Square Garden ahead of West’s performance in 2016 prompts reminiscing. Kanye reflects upon when “I used to go to the hospital and play Lamar the album when he was learning to walk and talk again     then we walked into the area together“.

The tweet refers to Odom’s time in hospital after falling into a coma in 2015. 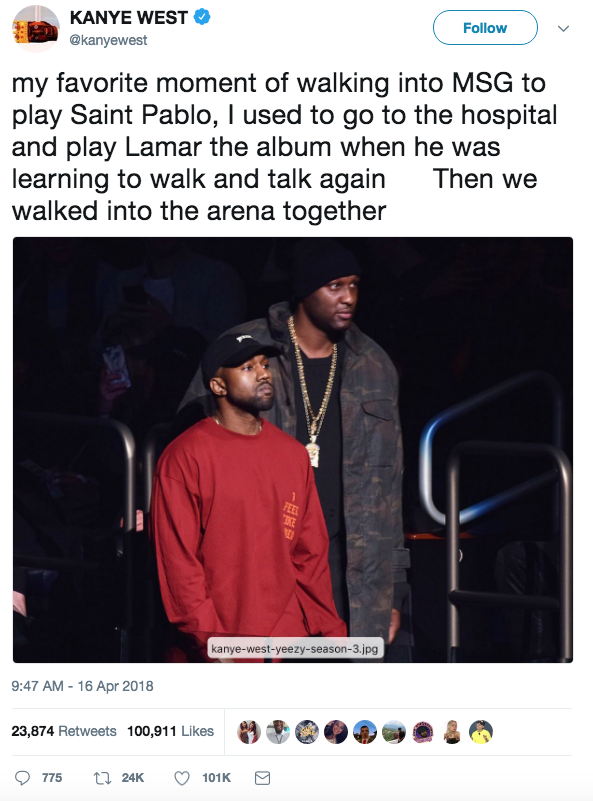 Was Lamar one of West’s ‘Real Friends’? At the risk of over-reaching, the tone of the tweet is melancholic, the unnecessary use of spaces before the final line creating a breath, a respite in which West’s thoughts are wilfully lost in the past.

There was a moment. Then there was another. And now, given that Odom and Khloe Kardashian‘s relationship has long sailed, the moment is gone – even if the space of nostalgic reflection tries to stretch time itself.

We refuse to believe the spaces aren’t pregnant with purpose. Rather, I propose the space between the words leads into West’s next tweet, which offers a glimpse at the treatise within Break The Simulation, his impending philosophy book. 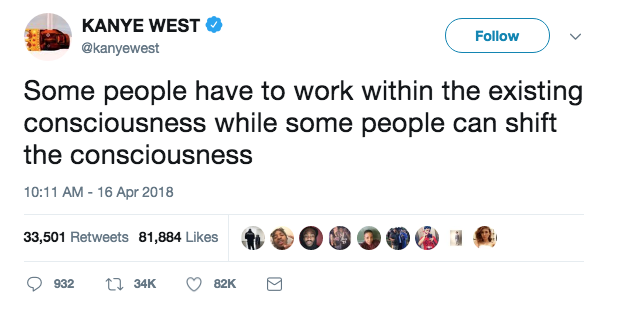 Is West telling us to read the space between the words, rather than the words themselves? That we shape our understanding of the world by permanently filling in the blanks, as it were? That the world is ever-subjective, and our consciousness can shift and ‘break the simulation’ by our own whims – or by deleting tweets as we please?

YES. This is undoubtably and unequivocally what he’s saying. Oh, and also this, in the follow-up: 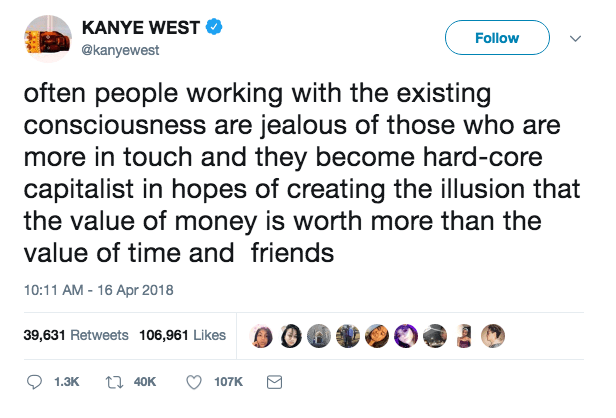 Clock that space before “friends”!

But what does this mean? This tweet is followed by several tweets of proto-Yeezy sneaker designs, suggesting that West is well aware of the richness of one of rap’s most wealthy and mogul-savvy stars writing an anti-capitalist statement.

But still, he centres family as the answer. Surrounded by the Yeezy shots are two drafts of neck tattoos that spell out “Saint” and “Saint West“, his son. 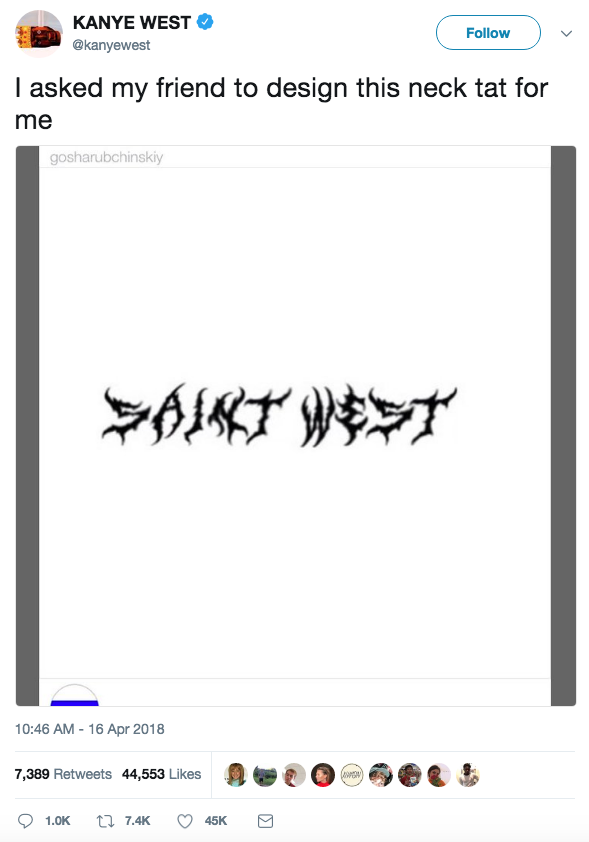 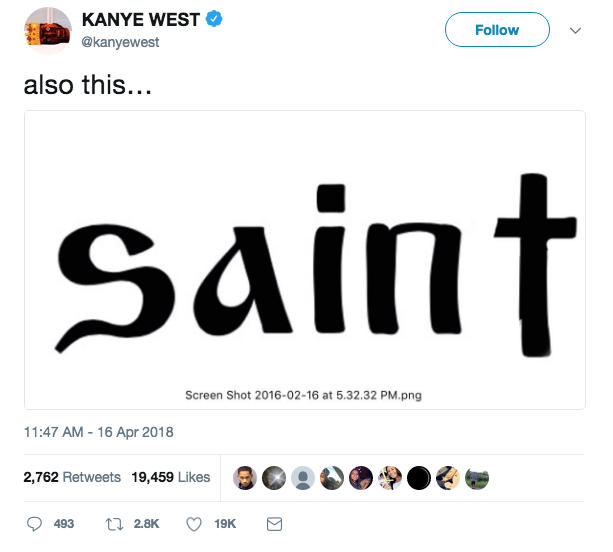 To me, the message is clear: West looks to ‘disrupt’ our money-obsessed minds. Love and friendship – ‘real friends’ – is the key. People who will text you in a crisis. The Fifth Element is love. Alternative facts can’t fight the truth of a father’s feelings for their family. That sort of thing.

Does this signpost the focus and inspiration for the next era of Kanye West: the post-Paris incident introspective family man writing an album dedicated to his clan, a la Beyoncé‘s Four? Or was he just bored and tweeted some random shit on his mind?

One answer’s a lot more fun, but that doesn’t make these 800+ words correct. We’re just glad he’s back on twitter. Check out his future indecipherable tweets here.