Kanye West landed in Sydney this morning for a 24 hour press junket to hype his short film ‘Runaway’ to a select audience of VIPs and industry cats. Since arriving at around 10am he’s been unusually quiet on the tweet. Probably visiting Mister Shuffles. 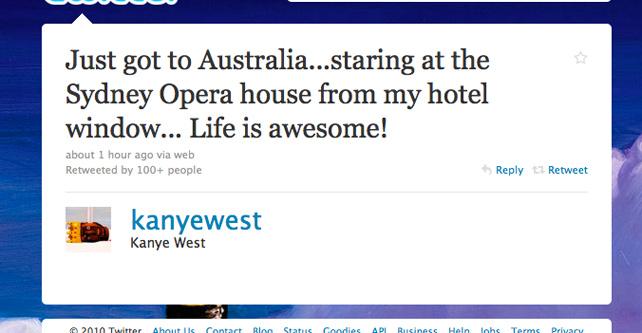 He premiered ‘Runaway’ in London on 7 October – as part of the whirlwind round-the-world press tour for the film and his new album My Dark Beautiful Twisted Fantasy due out on November 19 through Universal Music Australia. NME journalist Tim Chester wrote: Watching him in full flow was fascinating; being in his presence is like being at the tweet motherlode, coming as close as you can to the tempestuous furnace that spits untempered ego, classic quotes, and controversy at every turn. And as he introduced the film and stepped up for the Q&A afterwards he was part musician, part director, part comedian and wholly interested in pushing himself as an artist.

Directed by West and written by Hype Williams, Chester said the 40 minute short “features a body perfect model (Victoria’s Secret model Selita Ebanks) as a sexy phoenix that falls to earth and in love with Kanye, is full of fast cars, dreamlike sequences, explosions, banquets and a million other bits of cannon fodder for a cynical press to pounce on at its release in two weeks”; before ultimately concluding it to be “the vaguely pretentious but actually quite enjoyable Longest Music Video Ever.”