Amid the sea of celebrities who have come forward in Taylor Swift‘s defence, Justin Bieber has posted an Instagram story in support of Scooter Braun and Big Machine Records (the label that Taylor recorded her first 6 albums with and Braun recently acquired).

If you need a quick explainer of what’s gone down, here’s all you need to know on Taylor addressing Scooter’s “tyrannical control” over her music.

Now, let’s dive back into it. Biebs, who’s managed by Scooter, posted a screenshot of a TMZ article, titled “TAYLOR SWIFT FREE TO PLAY ALL HER HITS DURING AMAs… Big Machine Can’t Stop Her”.

The article refutes Taylor’s claims that her former label boss Scott Borchetta and music manager Braun were preventing her from performing a medley of her old songs at the American Music Awards in a few weeks. The screenshot also features a Big Machine executive’s quote stating they “have no legal right to stop this and have never tried. She and her team both know this.” 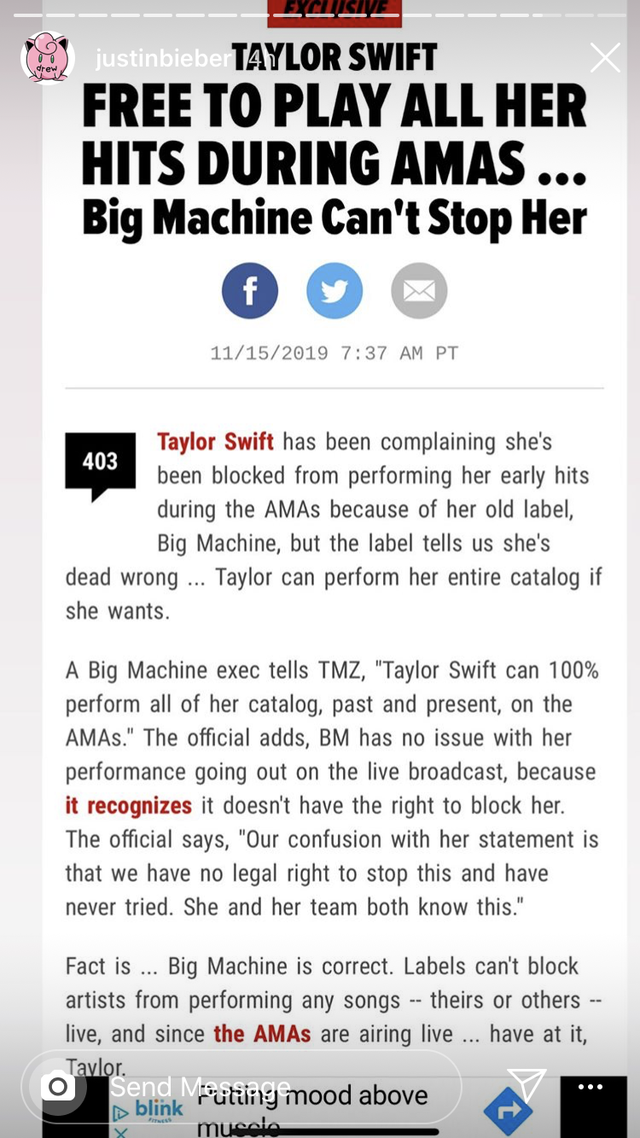 There are obviously a lot of intricacies to the story that we, the public, are unaware of –  and there’ll always be two sides to every story – but it is interesting that Justin has chosen to publicly defend Scooter.

Selena Gomez, one of Taylor’s best friends, came out swinging: “You’ve robbed and crushed one of our best song writers of our time an opportunity to celebrate all of her music with her fans and the world.”

Don’t know what else to do pic.twitter.com/1uBrXwviTS