WARNING: This post contains spoilers for the 2018 Eurovision Song Contest, so if you don't want to know who won and what happened, then you should probably click away.

After a hectic night that included a stage invasion and a stirring performance from Australia‘s own Jessica Mauboy, the winner of the Eurovision Song Contest has been announced, with Israel‘s Netta Barzilai taking out the grand prize.

Netta was an early favourite to win, thanks to the fact that her song ‘Toy‘ is completely and utterly batshit crazy, featuring a lot of chicken noises and other wild vocalisations, and her performance on the night was the very definition of extra:

Things got a little hectic during an early performance from UK contetant SuRie, when an invader bum rushed the stage and grabbed her mic, but she got it back and carried on like a pro:

The ever-feisty Joel Creasey, who was in the Eurovision commentary box along with Myf Warhurst, called the stage invader a “cockhead”, and ended up getting a shout-out from J.K. Rowling herself.

The two of them even had a cute-as-hell Twitter exchange, and he gave him an ‘Order Of Merlin, First Class’ for his commitment to saying rude words.

Well I am dying a little. T’was me. I have been peppering my commentary with regular Potter references too. ????❤️

This is something he’ll probably be bragging about for a long time.

Our very own Jessica Mauboy gave a stirring performance of ‘We Got Love‘, and was frankly robbed in the voting, ending up in 20th place overall between Hungary and Serbia.

Israel’s Netta Brazil was way out ahead in the final tally, coming in with a winning 529 points – behind her were contestants from Cyprus, Austria, Germany and Italy. You can see the top ten ranked Eurovision countries below: 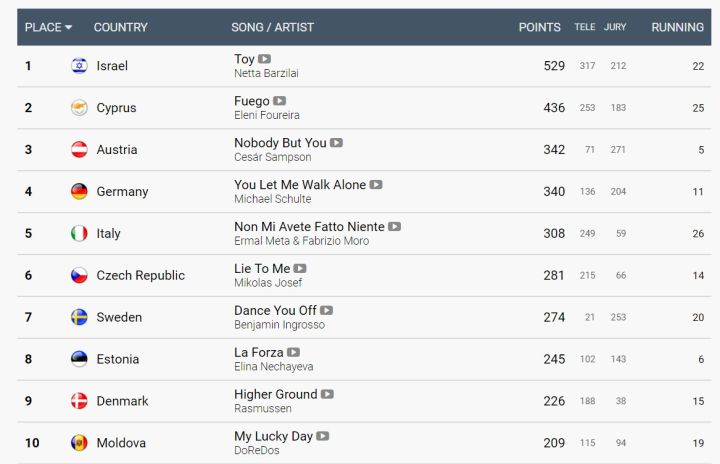 It’s the Eurovision Grand Final! Happy Eurovision from the palest moles in Portugal @myfwarhurst and I. We are parked in our commentary booth with snacks aplenty and ready to cheer on @jessicamauboy1! You can catch our coverage of Eurovision live at 5am or in delay with extra special backstage interviews and extras at 7:30pm on @sbs_australia. Portugal, you’ve been a complete and utter babe! ????????????????