How You and Coldplay Influence the Stock Market

Coldplay releases a new EP and single and the stock price of Citigroup, one of the world’s largest banking groups, rallies to its highest share price in six weeks. Completely unrelated events or a freakonomics/inconvenient truth/Michael Moore-style cause and effect relationship that can’t be ignored? As much as we love batshit crazy conspiracy theories here at Pedestrian we’d admit that this one probably falls somewhere in the middle of the two.

In 2005 when news of Coldplay’s third album was delayed by four months, pushing its release date into a new financial year, EMI’s stock price fell 16 percent. This isn’t surprising considering their first two albums sold a combined 20million copies and Coldplay was the best-selling current artist on their roster.

In 2006 rumours of Coldplay breaking up sent their share price south and in 2008 subsequent rumours of Coldplay following the moves of other EMI stalwarts Radiohead and Paul McCartney and parting ways with EMI once again negatively impacted its valuation.

In an interview with Chris Martin in the UK’s Telegraph in the lead up to the release of their fourth album Vida La Vida Chris Martin discussed the pressure that was being exerted on the band“EMI has been through a lot, but when people are saying ‘the success of the new Coldplay album is vital to EMI’s future’, you just want to curl up and die.”

So on June 26 2011 when Coldplay released Every Teardrop is a Waterfall” from their new Waterfall EP. I was struck by a couple of things. Firstly, though the band have released EPs in the past, it always seems kind of odd when a band of their size releases a handful of tracks as opposed to a full studio album. Secondly, I jokingly thought to myself that perhaps a certain record company’s share price was floundering and needed a boost.

EMI is no longer listed on the UK stock market. After a 2007 private equity deal from private equity investor Guy Hands and his company Terra Firma failed to turn around the fortunes of the record label, the financier of the deal, Citigroup, decided to pull in its debts in early 2011; meaning that EMI is now fully owned by Citigroup – one of the world’s largest banking groups.

Alas my search for a correlation between Coldplay’s success and the stock exchange would come to an end. Surely Chris Martin’s band of polite Englishmen couldn’t possibly effect the share price of one of Americas largest banking groups?…

The Coldplay single “Every Teardrop is a Waterfall” was released across the world between June 3 and June 5; the video clip was released on June 28 and it coincided with the exact day that Citigroup’s share price rebounded to it’s highest level in over 2 months. The week after the release date of Coldplay’s latest single coincided with the beginning of a positive upswing in the Citigroup stock that had been trending downwards for 3 months. 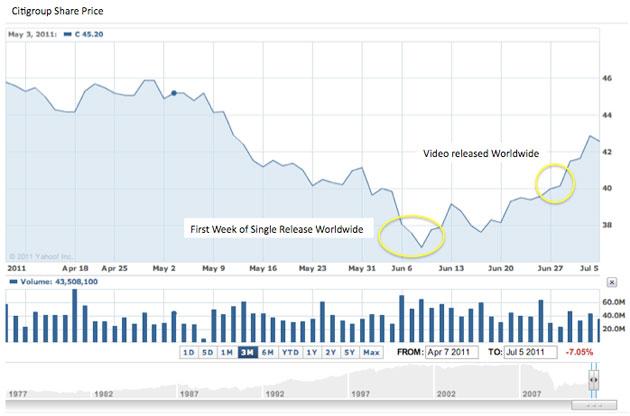 While it’s easy to prove that Coldplay is hugely influential over EMI’s profit and share price, the whole of EMI is worth roughly around $1 billion dollars which doesn’t even equate to 1% of the total worth of Citigroup which has a market capitlisation of over $120 Billion. So can a new EP from EMI’s biggest stars (no not Angus and Julia Stone) possibly effect the share price of one of the worlds biggest finance groups that sets the tone for the wider global economy as a whole?

Trading models and number-crunching by financial analysts continue to play the major role in trading decisions but another factor is starting to gain importance: Share prices are strongly influenced by public sentiment and information readily available to the market.

Organising and analysing this sentiment is a highly competitive and lucrative business. Traders are constantly looking for ways to beat the market and get access to publicly available information faster and more efficiently than their peers. Half a second of efficiency can deliver millions of dollars a day (reason number 379 on why you should quit your arts degree and transfer to business/commerce.)

But what happened if public sentiment was overstated in the financial models of share traders and funds? From all accounts Coldplay’s new single is ‘classic’ Coldplay and is currently setting radios – and sporting montages (cya later Darren we’ll miss you) – across the world alight (despite not having as strong an impact on the charts as previous lead singles “Vida La Vida”). “Every Teardrop is a Waterfall” is currently whetting the appetite of millions of fans across the globe for a slated soon-to-be-released full length album. Fans are tweeting about it, updating Facebook, blogging, tumbling, websites are reviewing it and posting it and generally making a lot of noise about the release. Social media is word of mouth on steroids and something that can be tracked by traders and financial institutions.

The world already has the world’s first purely Twitter run hedge fund and US university research has shown that Twitter can, with an 87% accuracy, highlight swings in the share market.

Clearly these are extreme examples, however the financial world is already factoring public sentiment and the explosion of information that social media and the web create into their models.

We spoke to Quentin Meagher who works as a Trader at Liquid Capital Markets who said “social media is gradually having more and more of an influence on equity markets than people think. It’s influence is obviously a lot harder to monitor than traditional media channels, however its clear that its becoming a more timely and accessible force. The next question is though, is it making markets more or less efficient?”

Has positive sentiment about the new Coldplay single unduly effected the valuation of EMI and thus caused people to buy Citigroup’s stock as they held it as an asset?

Needless to say, this would be an over-statement of Coldplay’s influence on Citigroup’s balance sheet and a glitch in the system. Could the amount of noise that pop culture moments create through social media and the web be over-represented by traders who are simply looking for signs to beat the market that a stock is on its way up.

Anyone trying to value EMI as an asset would have #Coldplay set as a key indicator for the overall health of the company considering the influence the band has had over EMI’s share price in the past. While experienced models and traders are unlikely to overstate EMI’s importance to Citigroup’s overall business they could certainly be unduly giving a higher weight to the performance of EMI as an asset due to an influx of positive sentiment around one of their key indicators.

There are hundreds, if not thousands, of factors being factored into Citigroup’s share price every day but even if Coldplay and their fans contributed a fraction to the outcome of the stock it would have an influence far larger than most would have imagined.

So when you’re singing along to “Yellow” up the front of the amphitheatre at Splendour in the Grass and you reach into your pocket to fire off a tweet with the hash tag #Coldplay remember two things: