In case you hadn’t already established that Dave Grohl was the most ADD man in rock, why not try his own personal radio station?

108.8 Foo Fighters FM is the latest gimmick from the former Nirvana/Killing Joke/Queens Of the Stone Age drummer as his band prepare to unleash their umpteenth new record this April. Via the virtual tuner, fans can turn the dials to hear all kinds of crazy Grohl activity. Always up for a joke, Dave sings Dishwalla, cues up Deep Blue Something’s ‘Breakfast At Tiffany’s’, hints towards more secret club gigs and airs snippets of the new material. Produced by Mr ‘Nevermind’ himself, Butch Vig, the new Foos record is said to be a return to the ‘heavier’ sound of their earlier releases, which is known to many as Grohl doing his best Cobain impression but realising, much to his dismay, that he can actually sing really well. To help his band in their god-given mission flatten buildings and perennially soundtrack Sports Tonight, original Nirvana bassplayer and sometime politican Krist Novoselic drops by to pluck some strings. 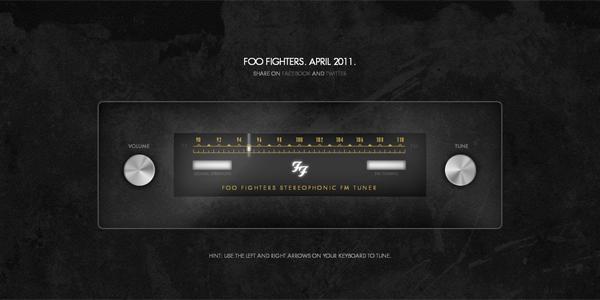 This isn’t the first time Grohl, the nicest guy in rock, has been directly involved in sending himself up. Last year he helped The Scissor Sisters in a viral campaign to launch their new album by pretending to sue frontman Jake Shears after getting a bit too close to his genitalia:

And who can forget his star turn as an air-hostess (and the launch of Jack Black’s rock career) in ‘Learn To Fly’?

In other Foo news, the band will be releasing their first documentary at this year’s SxSW festival in Austin, Texas. Directed by Oscar-nominated documentarist, James Moll, it will highlight the eighteen years of the band’s career. Says Grohl: “In October of 1994, I walked into Robert Lang’s Seattle studio with a guitar, a drum set, a bass and 14 songs I thought nobody would ever hear. Five days later, I walked out with the first Foo Fighters record. Sixteen years and seven studio albums later, we’re finally able to tell the story of how that one demo cassette turned into the band that we are today.”