The Don’t Kill Live Music movement is gearing up to make some serious noise in Sydney ahead of the upcoming NSW State Elections, particularly in the wake of the Berejiklian Government‘s prohibitive new festival legislation. And with a massive public rally planned for tomorrow, organisers have announced a lineup that easily rivals the few festivals that actually remain viable in the state.

Organisers for tomorrow’s rally, which is set to take place at Hyde Park North from 6pm sharp tomorrow evening, unveiled a laundry list of musical appearances from the likes of Ocean Alley, The Rubens, Cloud Control, Dan Sultan with Polish Club, Urthboy, Bertie Blackman, and Olympia.

The announcement also includes a list of industry speakers, which includes Julin Hamilton from The Presets, Murray Cook aka the OG Red Wiggle, Michael Chugg, Dave Faulkner from the Hoodoo Gurus, City of Sydney Councillor Jess Scully, Wollongong Lord Mayor Gordon Bradbury, and a whole heap more, with Yumi Stynes and Rhys Muldoon slated to act as MCs for the event. 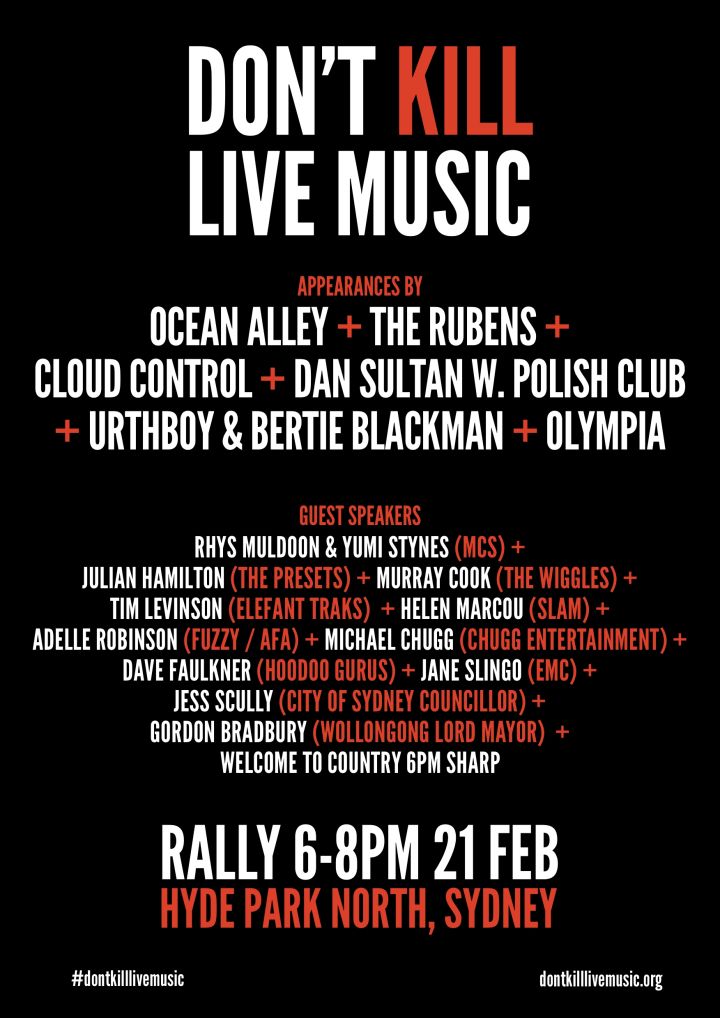 The event kicks off at 6pm sharp with a Welcome to Country.

A petition in support of the movement, which can be viewed and signed here, has attracted some 112,000+ signatures already.

Since Gladys Berejiklian and the NSW Liberal Government introduced the absurdly strict festival legislation, major festivals – including the Byron Bay Bluesfest – have asserted that they may have to relocate out of the state as a result.

That, coupled with the on-going decline of live music in Sydney due to the lockout laws, paints a grim picture for performing arts in New South Wales moving forward.

Tomorrow’s rally is expected to draw a crowd in the tens of thousands.

Might be time to get out there and make some noise, mates.