Sound the beef conch, ‘cos Briggs has gone HAM on one half of Aussie electro producer duo Flight Facilities after he took to Facebook to question whether this week’s edition of ‘Is this really blackface?’ was really, y’know, blackface.

If you haven’t been following the latest racial snafu, it involves a Perth mum who proudly declared that dressing her son as his favourite AFL player, Nic Naitanui of the West Coast Eagles – complete with head-to-toe brown paint – was a “QUEENING” moment on a Mummy Blogger’s FB page, only to be completely annihilated by everyone with half a clue.

Briggs – an Indigenous-Australian rapper with a lot of opinions on a lot of things, mostly the gross ignorance and disrespect that go hand-in-hand with white peoples’ using blackface as a party trick, and then attempting to justify it afterwards – had his say on the matter with a dot-point list of rebuttals to pro-blackface logic that made a helluva lot of sense.

But one person who wasn’t overly impressed with his logic is FF’ Hugo Gruzman, who got into a heated debate with fellow PEDESTRIAN.TV readers in the comments section of our FB post on Briggs’ list of no-nos after giving a history lesson on the origins of blackface in a misguided attempt to explain why this particular incident *isn’t* blackface.

Here are some of the highlights / lowlights: 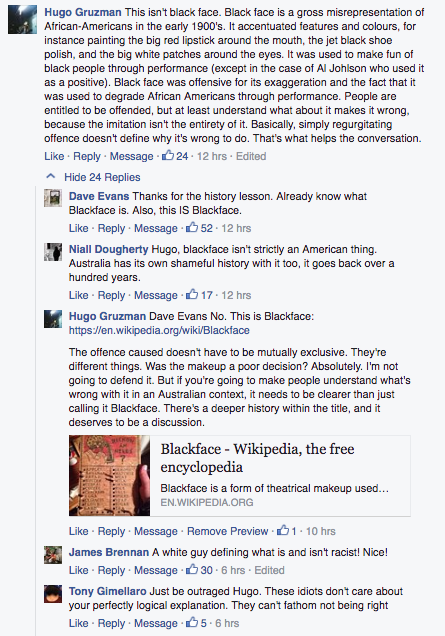 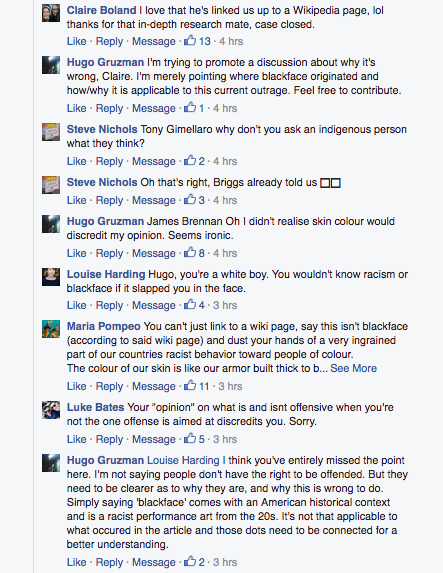 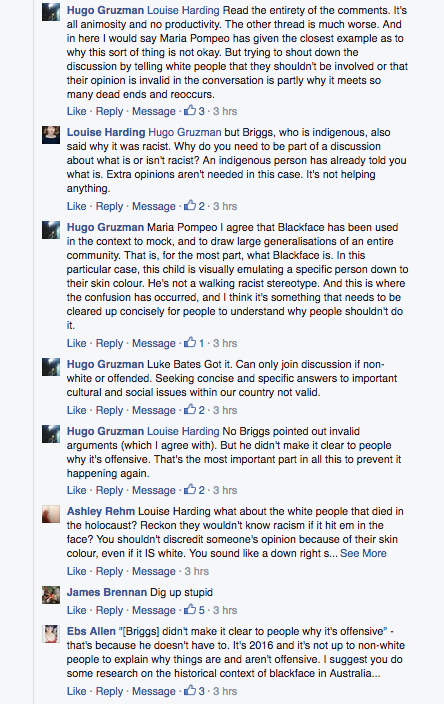 We’re sure Hugo had good intentions but he kinda lost us at “he [Briggs] didn’t make it clear why it’s offensive”.

Briggs did *not* hold back on his opinion about Hugo’s race-splaining, either, calling him a straight-up “dickhead” to P.TV.

“Cool, another white dude who gets to decide what black people are and aren’t offended by. These dudes are so sheltered and so privileged; you’re sitting back and saying you need to educate me on blackface? It’s insanely reckless to be talking like that – these kinds of remarks are the telltale signs of this white, paternalistic ideal of race in Australia. It’s like, you don’t have the right to be tell me why blackface isn’t offensive and use history as an example – Australia has its own history of blackface that dates back hundreds of years. So excuse me, Hugo from Flight Facilities, but are you a history major in race relations on Australia?  Go fuck yourself.”

One thing Briggs does not do: mince words.

One thing we wish everyone could agree on when it comes to blackface:

If you’re still on the fence, here’s a v. concise explanation about why it’s not the jolly joke that some people still consider it to be by Indigenous writer Nakkiah Lui, which aired on triple j earlier this year.

“When it comes to blackface there isn’t a debate. If a group of people who are the marginalised group, who are still facing racism, who are still facing inequality because of their race, who have to carry the burden of history on their skin and their culture every single day, if they’re telling you that ‘hey, this is offensive to me, it has a loaded history, it’s making me feel uncomfortable, it’s making me feel like a second class citizen’, it’s not up to the dominant culture — and in this situation that’s white people — to say ‘Why? Why is this making you feel uncomfortable? Because it doesn’t make me feel uncomfortable.'”

It’s also worth mentioning that Naitanui himself has said the incident “hurts my heart” and that, while he doesn’t believe the boy’s mum meant to cause harm, “it’s a shame racism coexists in an environment where our children should be nurtured not tortured because they are unaware of the painful historical significance ‘blackface’ has had”.

And that, friends, should be case closed.

P.TV reached out to Hugo’s management for a comment but were yet to hear back at the time of publishing.