PEDESTRIAN.TV has teamed up with Rekorderlig Cider to showcase a bunch of 10/10 artists from their Sauna Sounds series.

There’s no point denying the impact that Sydney rapper B Wise has had on the local rap scene, with intense beats, satirical lyrics and a frankly blessed rendition of the Red Hot Chili Peppers‘ ‘Under The Bridge’ for triple J‘s Like A Version segment.

We got the chance to have a chat with ol’ pal B Wise after his experience in the Rekorderlig Sauna Sounds, on all things music, repping south west Sydney and keeping up momentum after a monster year. 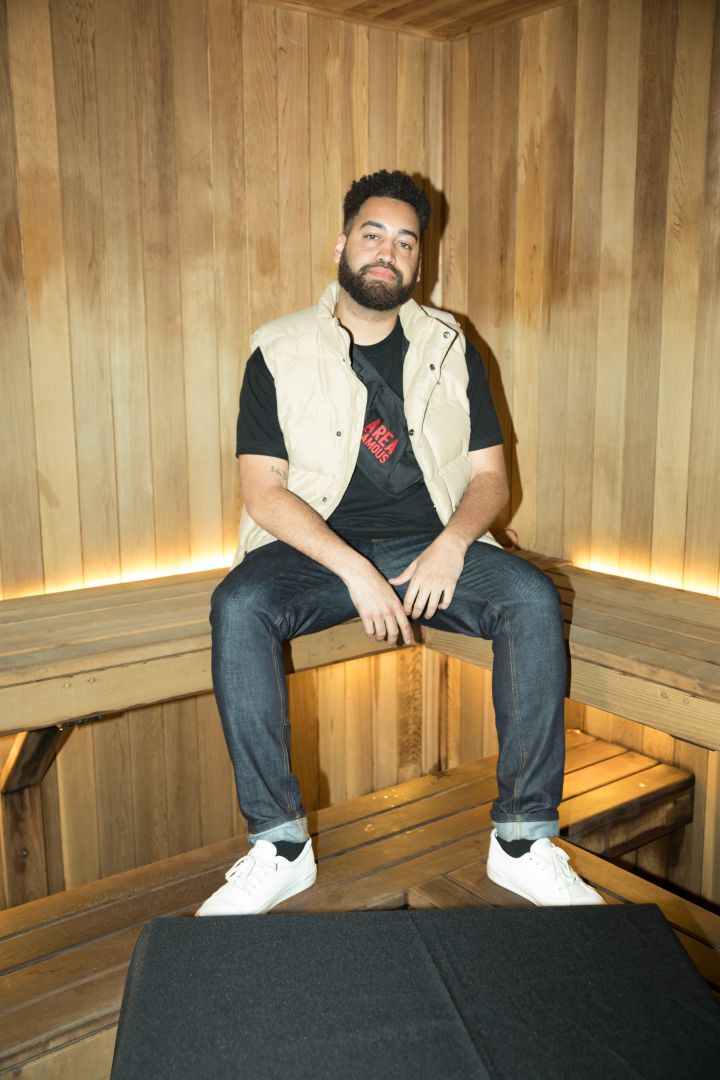 PTV: You’ve recently recorded a track in a sauna for Rekordelig’s Sauna Sounds. How did that come about?

B Wise: While I’m finishing recording music and everything like that (I was recording an album), it felt like quite an interesting opportunity to get involved in. I’ve always known the brand but yeah I thought this was something quite different – like, “Performing in a sauna? Let’s try that”.

B: It kinda reminded me of some other things I’ve seen like online, but this was a new vibe. It was a little reflective I guess, ‘coz of the wood but otherwise the only difference was, our sauna was still hot. They emptied it out but the heat just wouldn’t leave. It was a little different.

PTV: How has coming from South West Sydney shaped your music?

B: It just gives me a different type of topic matter to talk about than what’s on the regular plane. Obviously there’s more of a multicultural area and background in the southwest and western suburbs, so you just have different stories to tell. And it gives us a bit of identity over a lot of music that’s come out in Australia and even around the world.

PTV: What kind of pressure is there to be a voice for that locale?

B: I don’t think there’s any pressure, but just an expectation to sort of represent where you’re from. Not everyone has to do it, or does do it. But I feel like, if I’m gonna stand out anywhere I need to identify myself as different. Being overseas anyway, being a rapper from Australia, that is like, what? Okay cool. But then I gotta let them know that the music is up to par. I’m still going to rep where I’m from regardless.

PTV: You’re an example of a Western Sydney rapper who’s made it. What’s that like?

B: I hope that that’s what I am – being a sort of beacon for anyone that comes from that area and show that, you know, it’s possible for us to get involved in the music scene. And I think it’s important in a sense because when I was coming out as an artist and musician, there wasn’t too many… well, any rappers from Australia, from our area who were on the playing field.

PTV: Did you have anyone you could look to as you were developing?

B: One of the people I remember coming out, one of the people we would gravitate to most was Scribe. I know he was from New Zealand but it just felt like a bit more, like us. Just like one of the guys from around the way. So we gravitated towards Scribe a bit cause we didn’t have anyone else who was really doing it. Hopefully now I’m trying to do what I’m doing and there’s other people that see me.

Growing up in South West Sydney the only ambition I had was to be known in my postcode for rap. Obviously we’ve come a long way since then which I thank above for every day. But for my debut album it’s only right I share more of my story with you and pay homage to life experiences that made me the man I am today. I’m an African Australian who’s proud to make a record that’s for EVERYONE. On Sept 14 we’re all gonna be #AreaFamous And if that ain’t enough, to celebrate I’m taking this show on the road for my very first national tour!! Tickets are on sale now via the link in my bio ???? @gabegaspar

PTV: How would you sum up your debut album, Area Famous?

[It’s] an album with a journey, a bit of a rollercoaster. A bit more of a personal insight to me but also stories and tales for everyone. It’s not meant for one group of people. There’s something in there I think everyone is gonna find to relate to. The production level is on fire. We’ve put a lot of effort and time into it.

The Code feat @anfarose OUT NOW! Watch the full video via the link in my bio. Props to @jaencollective for bringing my vision to life. The work don’t stop ???????? • Area Famous out this Friday!

PTV: You’ve done everything from Like A Version, to playing festivals, to now doing Rekorderlig Sauna Sounds. Is this your ~year~?

B: I definitely have made this year, consciously, a good year for what I’m trying to do. ‘Coz last year was shit in my opinion because I just spent it all writing an album and not too much was going on. It’s like, what they call being off-cycle. I’m just like, I never wanna do that again.

I made sure that everything I did last year was in gear to make this year and I just want to keep that momentum. I feel like 2018 has been my biggest year career-wise.

PTV: With all that momentum going, what’s next for B Wise?

B: More music. I’ve got a few like, bucket items to tick off, like certain festivals I wanna play. Certain new territories I wanna touch – outside of Australia. I want the music to spread as far as possible. But I think that just comes down to more music, more music. Just keep working. The more work you do, the more opportunities will open up.