While organisers of Stereosonic music festival contemplate the idea of maybe thinking about profiling their punters by what exactly?, how terrible their tattoos are?, another national dance music festival has attempted to ban shirtlessness.

Organisers of Future Music Festival’s under 18’s sister event Good Life have restated their commitment to ensuring that no one – adult or otherwise – has to see a shirtless 14 year old boy lose their shit to Avicii during the March dates of their national underaged pash-fest.

Per the dress code published on their website: “No bum bags/fanny packs or man bags (backpacks are ok). Shirts must remain on at all times except for in the water park.”

The practice of banning specific items of clothing from music festivals has – WAIT, WHAT THE FUCK IS THE WATER PARK? Guys, I would like to know more about the water park please. Like, what are we talking about here? Cool slides and wave pools or just a pool with a bunch of palm trees around it? 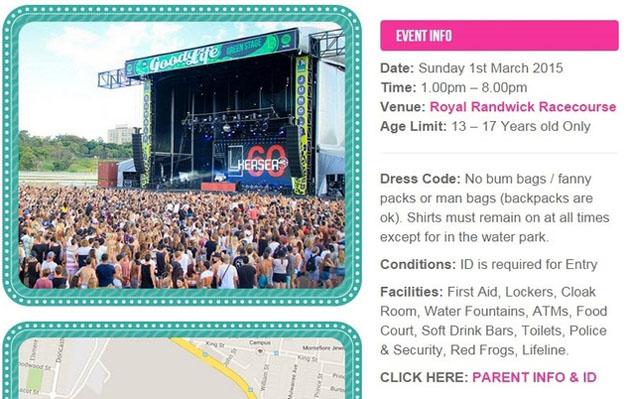 The news comes after Stereosonic co-founder Frank Cotela railed against the aggressive “muscle culture” which may have at one point or another  killed your vibe in a widely read missive posted last week to his Facebook page.

“Brother EVERYONE is laughing at your Shorts, singlets, fake tans, bumbags and cartoon shaped bodies … but more importantly we are sick of the charged up violence you bring… time for a change!” he wrote. “If it means that we will profile you at entry point and stop you entering – you will be stopped! 40 dumb khunts are not going to spoil a great day enjoyed by thousands! – #brothernoonegivesafuckaboutyourbody?”

I for one endorse this.