Eyewitnesses report as many as five people have been shot dead at a BPM Festival event in Mexico.

Attendees and artists at the electronic music fest’s closing event, held at the Blue Parrot venue in Playa Del Carmen, say a gunman opened fire on a crowd of revelers during a set.

Someone has come into the club in Playa Del Carmen and opened fire. 4-5 dead and many wounded. Stay in ur fuckin hotel if you’re here at BPM

Shots were fired at Blue Parrot while we were in the building. We got out okay and are finding out more details

People reporting at least five bodies were spotted on the ground. Head is spinning. Friends please check in if you were there.

100% civilians / tourists were shot in front of Blue Parrot. Waiting to hear about The Jungle.

Shooting at Blue Parrot during BPM. We were all there but we got out and are now safe.

i was at the shooting at #blueparrot at #bpmfestival i heard 5 rounds of a .22 semi auto then a pause then 3 more rounds

In tweets (which have now been deleted), festival organisers urged punters to stay away from the area while police investigate the matter. 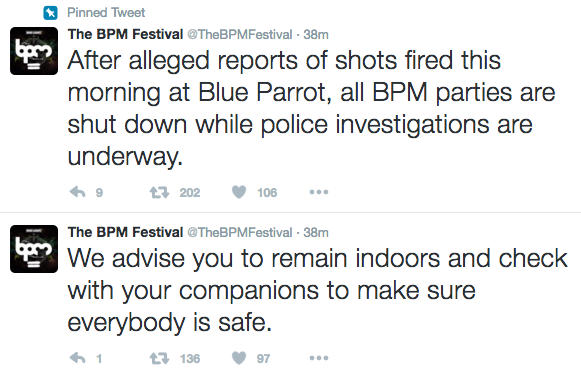 BPM Festival is a ten day-long event, billing itself as a “global gathering of DJs, producers, revelers and industry professionals.”