Why Are A Record Number Of Aussie Teens Wanting Genital Cosmetic Surgery?

A total number of 1500 labiaplasties were performed in Australia in 2013.

For a population of 23 million, the numbers mightn’t seem all that significant – except for the fact that there’s been a threefold increase in the procedure over the previous decade.

Experts reckon more and more women are seeking out surgery as they feel their downstairs doesn’t look “normal”.

What’s more, a freshly-released landmark Australian study exploring GP experiences has found that girls as young as fifteen are going to their doctors to enquire about and/or undergo the surgery.

If you haven’t heard of it before, labiaplasty (also known as labioplasty, labia minora reduction and labial reduction) is a surgical procedure for altering the labia minor (inner labia) or the labia majora (outer labia) – the folds of skin surrounding the vulva: 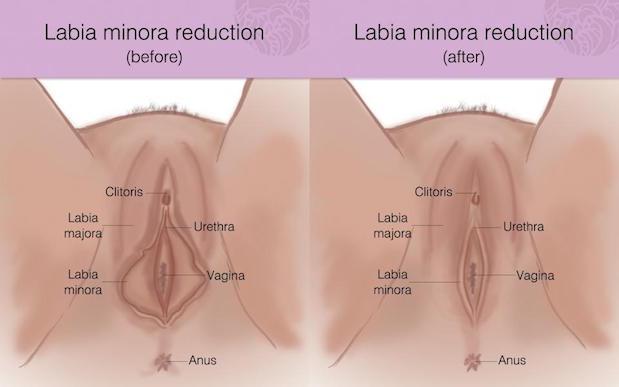 Like a lot of elective surgeries, it can be requested for medical reasons (like constant irritation from the inner labia rubbing against tight clothing) or for cosmetic reasons (like wanting symmetry or less tissue).

It’s a pretty full on procedure, as it involves cutting away ‘excess’ tissue for what is touted as a ‘neater’ appearance.

443 GPs took part in the aforementioned study, conduced by the University of Melbourne’s Department of General Practice, and a whole third said they’d received requests for labiaplasty from girls under the age of 18.

The study was published in the British Medical Journal and is the first significant survey to explore GP experience of female genital cosmetic surgery.

Lead author of the research, Dr Magdalena Simonis, reckons the results are worrying.

“The fact that surgery rates for 15-24 year olds are the same for 25-45 year olds is especially worrying, because female genitalia don’t reach maturity until around age 18. There’s an epidemic of anxiety about normality.”

What’s concerning is the fact that at least half of the requests came from girls and women whom GPs considered emotionally vulnerable – those who experienced anxiety, depression or body dysmorphic disorder.

According to the GPs surveyed, the main reasons why girls are wanting the surgery include:

– Fashion (a good example of this is the popularity of leggings, which can be very revealing)

While some women absolutely do experience medical issues that require the procedure, there has been no increase in genital abnormalities since 2003 – so the increase in requests points to societal pressures.

Dr Simonis thinks the cosmetic surgery industry has a lot to answer for, as they can be exploitative of women’s ignorance of their own bodies.

“The industry is brilliant at using social media to convince women and girls that they have ‘redundant’ or ‘excess’ tissue, when in fact we know that the labia are rich with nerve fibres,” she says.

“Surgery to ‘trim’ the labia can affect sexual response, because the clitoris is not just a ‘pea’ as described in textbooks, but is a larger organ, most of it not visible to the eye.”

Of course – what you choose to do to your own body is your business, and if you decide that surgery is right for you and will improve your confidence, that shouldn’t be discredited.

Just last week, a 23-year-old woman called Emma* made a guest-appearance on SBS’ Insight program. She decided to undergo labiaplasty in April this year after enduring years of self-consciousness and shitty comments from family and her ex-boyfriend about her protruding labia.

In a piece for SBS, she wrote:

“Labiaplasty gave me the strength and courage to get out of my abusive relationship and move on with my life. I have since had one new sexual partner and instead of hiding myself when becoming intimate, I was able to finally feel confident and comfortable in my own skin. It was like a huge weight has been lifted off my shoulders and I’m so glad I finally went through with it.”

The good news is, as of October 1st this year, the Medical Board of Australia has begun advising that girls under 18 who ask for surgery should receive counselling and a three-month cooling-off period to ensure they’re ready and fully aware of the implications of surgery.