Who TF Knew Will Sparks Was So Shredded & Opening A Gym / Health Bar?

In 2013, a virus of sorts ravaged this country’s most liveable city.

It was called the Melbourne Sound.

If you were somehow immune to the savagery of the genre and don’t know what that is, here’s the top definition of it from Urban Dictionary:

“A progression from the uptempo, horn-infused Dutch house style, Melbourne bounce (which also at times fuses elements of acid house and psytrance) is a descendant of the electro house umbrella with inspiring party-hardy jams, raucous horns, and goofy, fun-loving sensibilities. The squelching horns will melt your mind on at a big festival stage or on a huge system.”

And one of the pioneers of the mind-melting sorcery was (and is) Will Sparks.

He’s the mastermind behind a string of underground and commercially-successful bangers like “Ah Yeah“, “Chemical Energy” and “Bring It Back“. Sparks now tours the globe performing, and when PEDESTRIAN.TV get him on the blower he’s lapping it up in Mykonos. Don’t be too jealous though – he assures us he “can’t tan for shit”.

Now a 22-year-old, Sparks started producing music back in 2011. “I was a guitarist originally. When the internet first sort of started, I began researching music and downloading,” he tells PEDESTRIAN.TV. “One night I went to a club and fell in love with the music of a certain DJ, around the time that the Melbourne underground sound started. I became obsessed and I did everything I could to start making music.”

And the stuff he produced went proper bananas. Wandering (or staggering) down King St in Melbourne’s CBD on any given weekend in the peak Sparksy-era of early 2013, you’d see that the line to listen to him at Cloud Nine was relentless.

It snaked right round the block, with some punters paying up to $100 to jump the line. The crowd was mainly made up of young women in American Apparel hot shorts, 20-something blokes in nipple-bearing singlets and the occasional normie who thought the music was fun to dance to and wanted to see what the fuss was about. 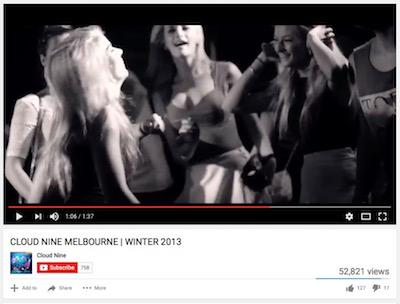 His tunes copped air-time on commercial radio, and even made an appearance at Ja’mie King‘s exclusive 18th birthday party.

But it wasn’t all heaving bangers and lollipops.

King Street, along with the culture that came with it, was widely criticised in 2014 after a promoter from Cloud Nine was revealed to be a convicted drug trafficker. A spate of GHB-related overdoses in the area further cemented the public’s perception that the scene was toxic for the city.

With the lyrics of Chemical Energy reading ‘Drunk in a club, stumbling sideways, munching my gums / I’m drunk with a buzz, with the amphetamines under my tongue’, you’d be forgiven for thinking Will Sparks is a pinger fiend with no regard for his wellbeing.

“I started going on tour when I was 19, and I was never at home. I was never around friends and wasn’t even able to go to the studio, so I got really bored,” says Sparks. “I went down the the gym at the hotel and that was it, I just started going for it, and it became a massive obsession.”

When queried on how he balances an artist’s lifestyle with wellbeing, he says he tried to stay sober most of the time.

“At my age now, I can’t even really party hard that often. Maybe once a month I’ll have a big night – but I’ll feel like shit for a week and a half afterwards. I take things on pretty hard mentally these days and since I’m into my fitness, I get guilty. I’m all about hard work, so you gotta pick yourself up and keep going – no excuse.”

This healthy obsession has lead to Sparks creating a dedicated Instagram to chronicle his workout routines and gains – but it doesn’t end there.

“I’m in the process of creating a protein drink at the moment, and I want to start a nutrition food bar” he says. “And a gym, and merch.”

Ideally, he says he’d open the gym in the “hot spots” like Chapel St in South Yarra or Glenferrie Road in Hawthorn.

And what’s Sparks’ motivation? Is it purely aesthetic, or is he really concerned for his health?

“Its definitely both. It’s always both. I eat a lot of good things because I want that inside of me. And then the benefits are that you gain more confidence in yourself. I used to be so unhappy with myself, and now I’m so much happier. That’s something I want to motivate people with. If you work hard, you can get anywhere.”

“We [DJs] aren’t all the crazy lunatics that you guys think we are.”