I have a medium-level interest in horoscopes and astrology – I like to read mine on occasion, and buy into it a little when it’s accurate, but I’m not mapping my life by the stars. I was really dedicated to Co-Star until it went all weird, so when my colleague Kylie told me there’s an app even more accurate than Co-Star called The Pattern, I was intrigued.

The Pattern works similarly to Co-Star – you put in your birth date, time, and location so it can come up with your specific reading based off this – I assume using your sun/rising/moon signs, but the app doesn’t actually clarify how it sources it’s information.

“Based on decades of research, we aim to give you the most in-depth and comprehensive information about yourself, your relationships, and the various time periods in your life. We aren’t here to make predictions or judgements, but rather provide you with tools that highlight events affecting your life.”

Sounds vague and bullshit, but I can honestly say the information it gave me was bang-on, so much so that I felt utterly seen and actually quite weird about it.

I’m still working out what all the shit means in the app, but basically my home page right now has these sub-headings listed:

From what I can work out (while the app is great, it could improve it’s guide to using it), the ones with time periods are my “patterns”, and the others contain general information about my personality and experiences. Obviously, I hit the patterns first.

I am someone who deals with anxiety and has done so since I was a kid, and unlike my Pisces star sign, I’m quite an attention-seeker and very confident in social situations. So it was interesting to see this covered considering Pisces are generally, from my limited research, considered to be less outgoing. 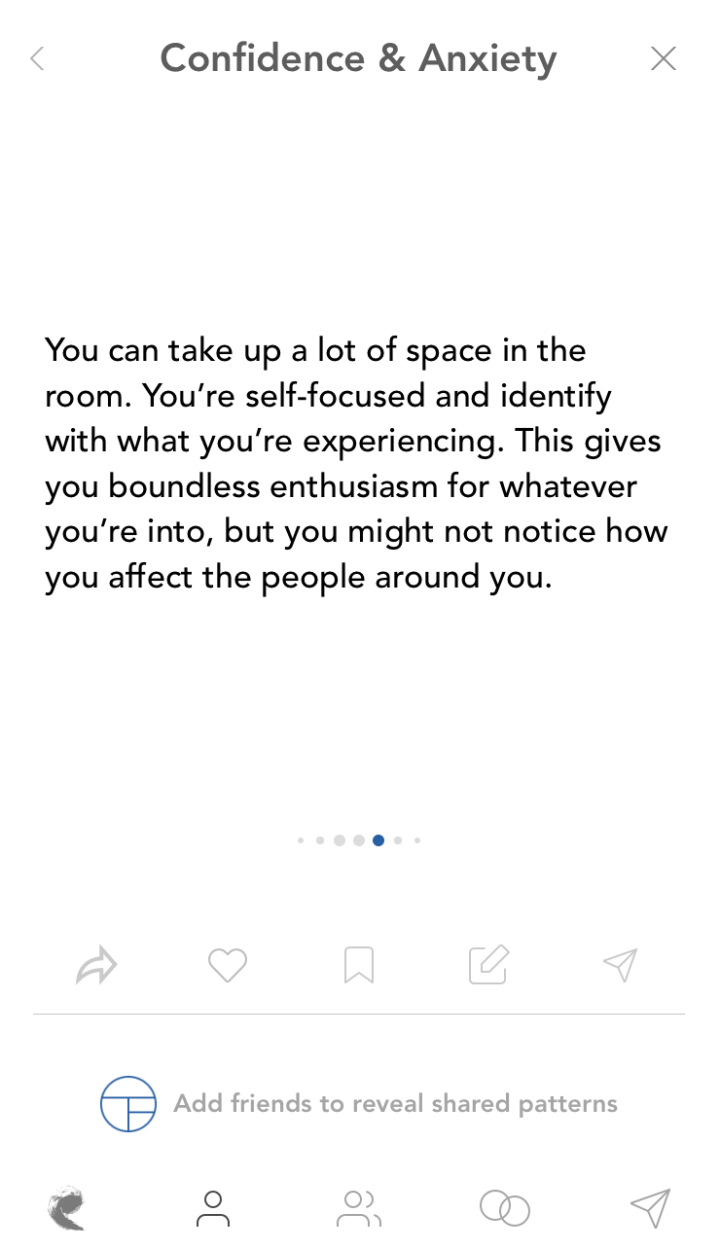 This is VERY on brand for me. This pattern also said I can sometimes be self-focused and it becomes an issue in my relationships – I don’t want to reveal all my dark secrets to you guys but I can say one of my great weaknesses is being a self-centred dick.

The app is great in the sense it doesn’t just tell you about yourself to the point where you wonder if they’ve been secretly watching you, ASIO style. It also gives you timely advice on how to do better and to recognise when you’re veering off path. 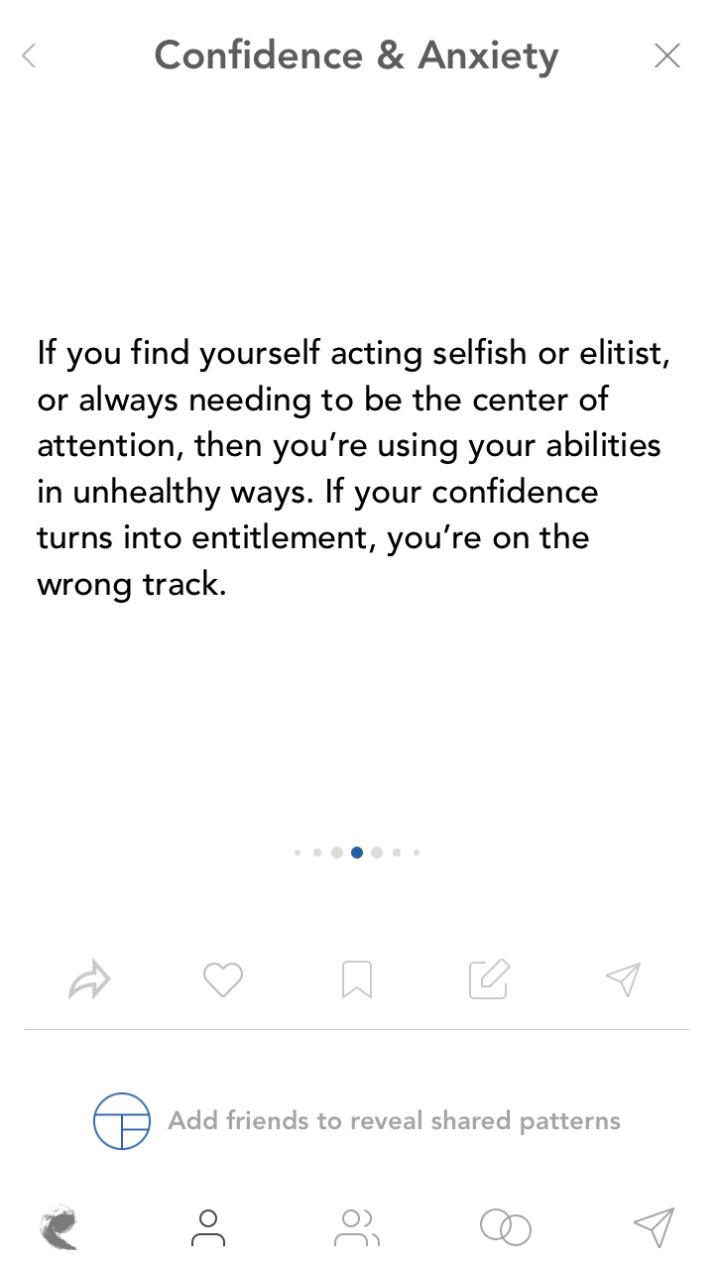 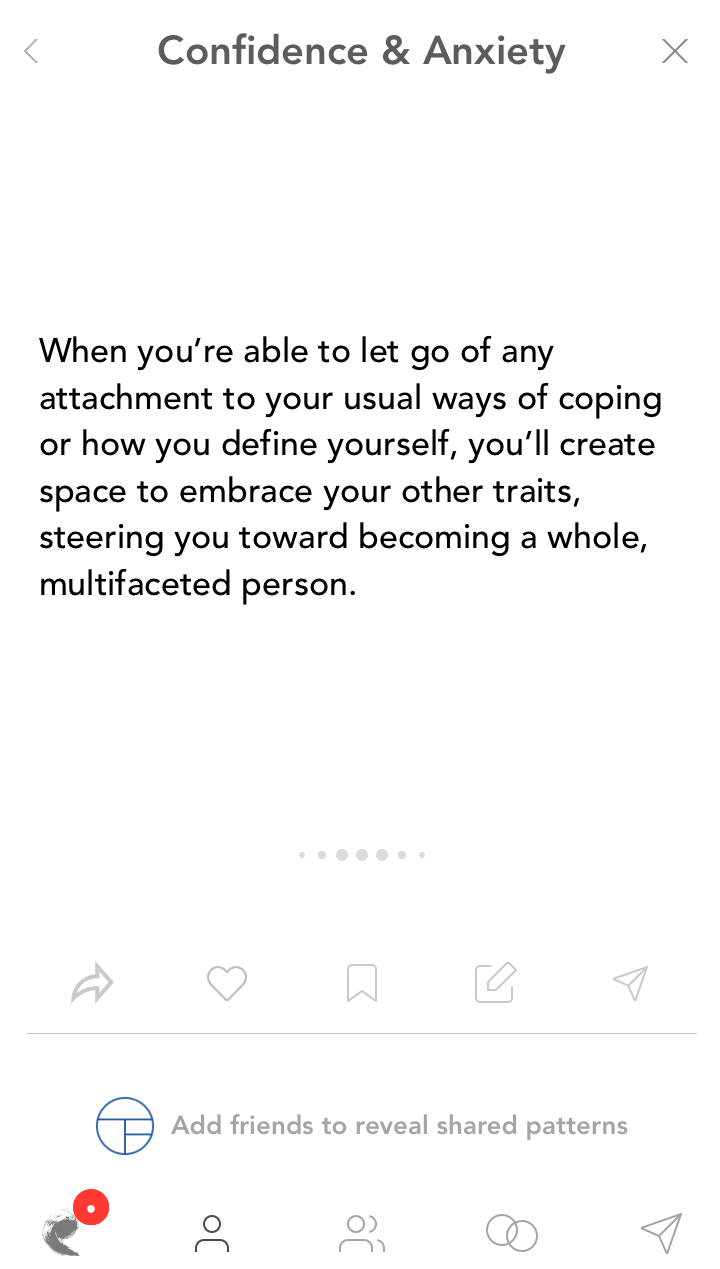 Again, I’m not going to delve deep into all my personal shit but basically, this section on The Pattern was EXTREMELY accurate to my life. Maybe less so in terms of my current relationship, but historically and in terms of my own habits, yes. 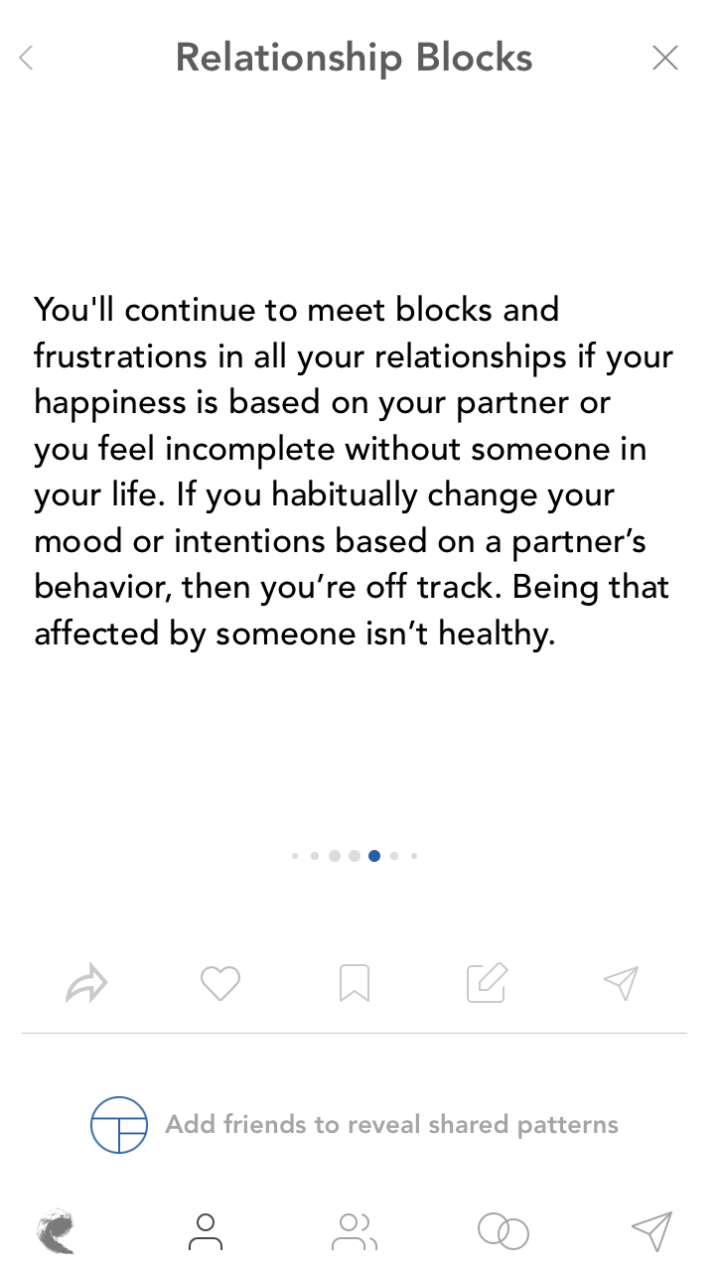 Again, The Pattern also gives stellar advice even my psychologist would praise. 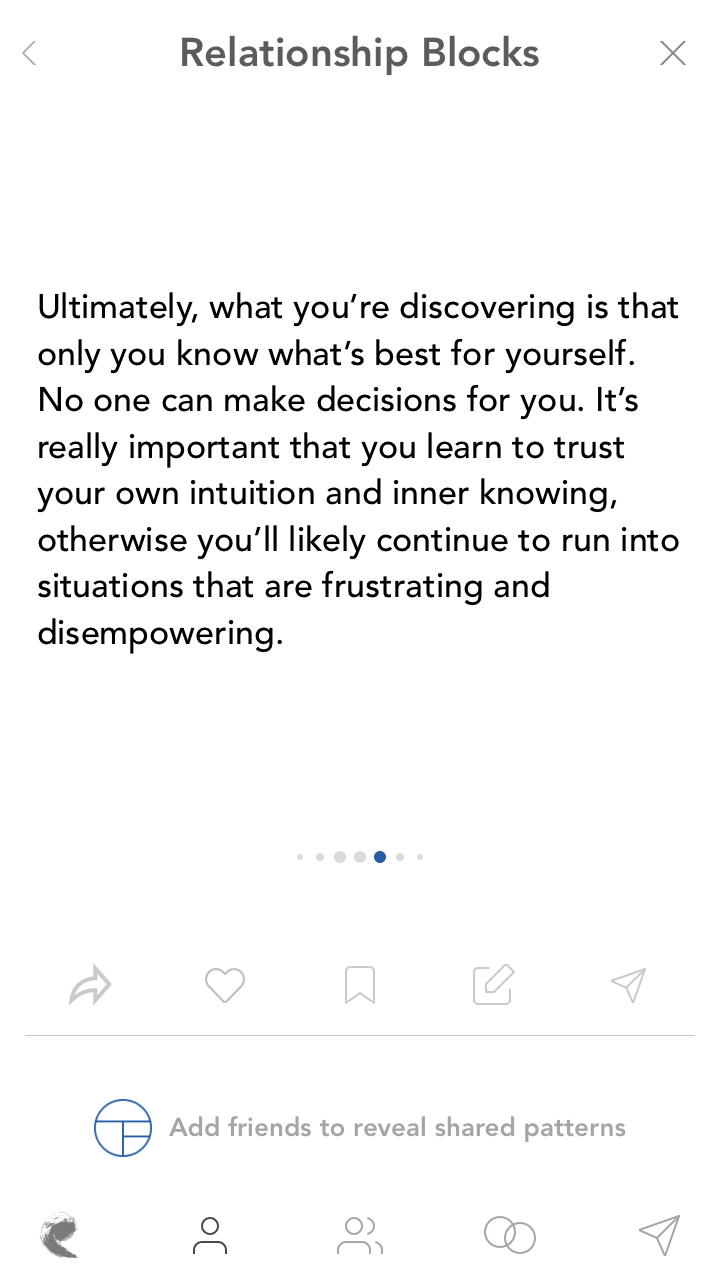 The other sections are equally as interesting, but we’d be here all day reading about me if I posted a screenshot from each of those. And I know you, like me, really only care about your own information! But I will tell you this – the app lets you connect up with other important people in your life, looking at patterns you are sharing and also giving you insight into what they’re going through.

This is great if you really buy into astrology and want to know what, lets say, your boyfriend/girlfriend is experiencing emotionally based on their sign. For example, if your girlfriend is in a period where she’s feeling unsure of herself and likely to feel rejected if someone is critical of her decisions, you’d be like “OK, might lay off the criticism and up the empathy this month”.

Look, it’s absolutely not for sceptics. This is a hard-core astrology app for people who dabble or truly believe. But of the ones I’ve tried, both online horoscopes and daily apps, this is by far the best – the readings are spot-on, but the advice is really wise and timely, too. And at the end of the day, don’t we all want to not just understand ourselves more, but actually be better people?

READ MORE
Gemini Szn's Here So Dream Big, Yarn With Randoms & Reply To Every IG Story Like It's Just For You