“I think it’s important to note, before we start this, that not all trans people get surgery,” Melbourne-based artist and activist Miss Blanks told me over the phone. Miss Blanks, or Sian, is crowdfunding for gender-affirming surgery on GoFundMe. Medicare doesn’t cover it, because it’s seen as cosmetic.

“Some people need to feel affirmed in many different ways, some people just get hormones and that’s fine. The trans experience is very wide,” Sian said. “There’s this misconception that if you’re trans, you identify as this one thing who is trying to physically alter themselves to be this other thing and it’s not that.”

To Sian, being trans means you holistically, spiritually, emotionally, mentally, and physically, do not agree with the gender marker assigned to you at birth. “That is the definition of transgender identification.”

Miss Blanks, who turns 25 this month, is a trans woman of colour. She released her debut EP Diary Of A Thotaholic in 2017, and has since taken the stage at Bigsound, Vivid, Dark Mofo, Laneway Festival, and Transgenre. The hip hop artist celebrates sexual empowerment through her music, and also uses her media presence to educate her audience on racial and gender diversity. 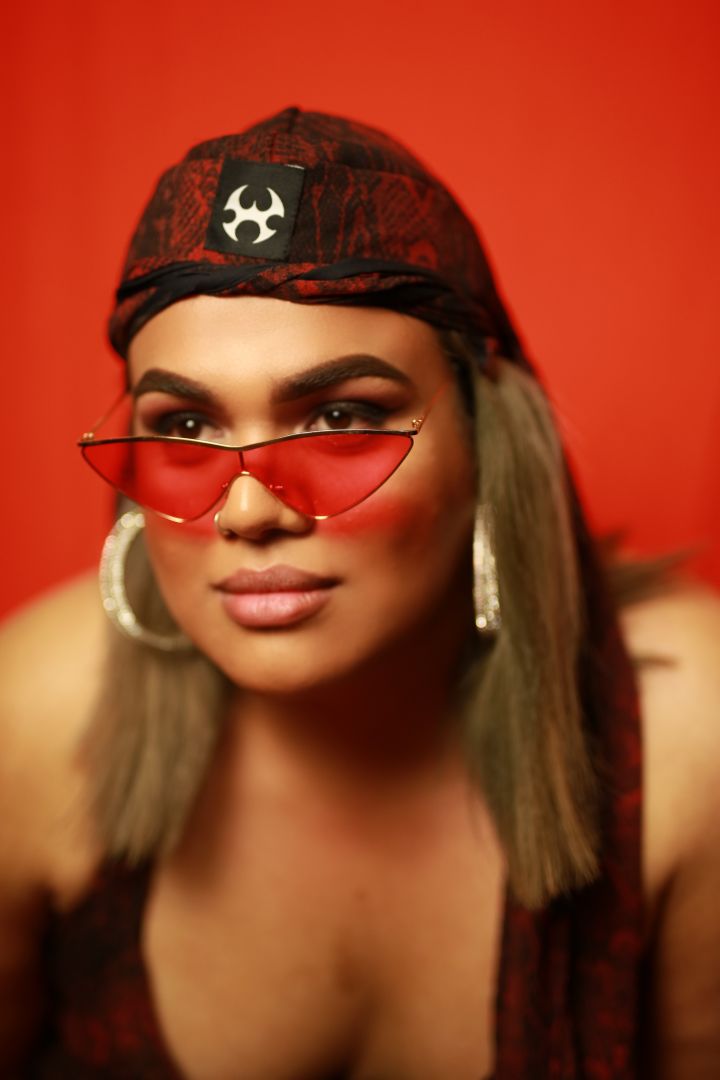 Surgery has always been a pipe dream for Sian, but she has now gotten to a point in life where she really, really wants it.

In the past, Sian has worked hard to raise money for the surgery. However, she also supports many of her loved ones and friends financially, and the money always went to them first. “It’s taken nearly 25 years for me to realise that I can’t give to people if I’m not being fulfilled as well.”

So she started a GoFundMe to raise money for the surgeries. Her initial goal was $25,000.

In the first 24 hours, Sian set the fundraiser to private and shared it with her industry colleagues, many of whom have benefited from her talent and voice for free. “This was the time for real allyship to come out,” Sian said. “And it doesn’t have to be financially, it can be sharing it with other people within your network.”

Sian raised $8,000 in those first 24 hours, which really gave her the confidence to set the fundraiser to public. On the second day, human rights activist and founder of Sisters Inside, Debbie Kilroy, reached out.

“She was right. I hadn’t factored in pre-planning and consultations,” Sian explained, “I hadn’t factored in aftercare. I’ve compromised in these ways to keep costs down and [Kilroy] said, ‘Realistically, how much is it going to cost?’ and I replied, ‘Around the $40,000 mark.'”

So Sian increased the goal to $50,000. She knew it was the right thing to do, but she still felt hesitant. Sian didn’t want to be this open with strangers on the internet, she didn’t want to ask people for money, let alone $50,000.

”It’s a two-parter,” Sian said. “If it means I’m going to have money to have surgery and be happy, so be it. But at the same time, the fact that I have to put myself through this in order to raise the money is really disappointing.”

I can’t believe I’m doing this but I hope in me asking for support, I’m setting an example for other trans people that it’s ok to ask for support and not feel shame, especially when you have no other option but to live in a world that is not currently set up to love and hold you, where surgery sometimes is the only option and financial access isn’t one. The reality is, I need help. I don’t ask for help, I’ve been fiercely independent my entire life, I’ve always been the person to provide assistance to those around me – whether it’s friends, family, peers, community – it’s what I do. However, this support is life changing/saving and it’s necessary for survival, my overall quality of life, and for my trans existence within a cisgender world. It’s important that I make this happen and those around me & allies are committed to making this happen with me. Big or small, your donation means a lot to me. Please share and do what you can. Much love, light, and warmth as always. MB ❤️ Link in bio.

Medicare “does not specifically fund” trans surgery, a spokeswoman for the federal health department told The Australian last year. There are rebates for some procedures but only if a practitioner “deems [them] clinically relevant.”

By definition, Medicare doesn’t cover medical and hospital services which are not clinically necessary, or surgery solely for cosmetic reasons. Affirming surgeries for trans people, like breast augmentation or facial feminisation, are considered cosmetic surgeries.

In Brisbane, young activist Tennille Fleming recently started a Change.org petition demanding top and bottom surgery be covered by the national insurance scheme. Over 23,000 people have signed the petition so far, which is 2,000 signatures shy of its current goal.

“I was in music class and I was speaking to my friend, who’s trans himself, and I was thinking about how hormones and oestrogen and testosterone are partially paid for by the MBS [Medicare Benefits Schedule], but top and bottom surgery isn’t,” Tennille told PEDESTRIAN.TV. “I just didn’t quite understand it, since New Zealand and the UK cover it.”

In 2018, the New Zealand government lifted a cap on gender affirmation surgery, funding a minimum of four surgeries every two years. In the UK, the surgery is provided by the National Health Service of England, or NHS for short. In both countries, waiting lists apply.

Tennille created the petition because of the data around trans people who have attempted self harm or suicide.

“Too many LGBTQI+ kids and adults have and are suffering right now as access to affordable gender-affirming surgeries are limited,” Tennille wrote on the petition. “This has lead them to attempt to, or succeed in ending their life.”

In 2019, a study published by the Yale School of Public Health, found trans people who underwent gender-affirming surgery are “significantly less likely to seek mental health treatment for depression and anxiety disorders or attempt suicide in the years following the procedure”. The study looked at data over 10 years for the entire population of Sweden, and is believed to be the first long-term analysis of the effects of gender-affirming surgery on the mental health of trans people.

“We know that transgender individuals are at higher risk of psychological distress than the general population due to stigma-related stress and stress associated with a lack of affirmation of their gender identity,” said study co-author John Pachankis. “No longer can we say that we lack high-quality evidence of the benefits of providing gender-affirming surgeries to transgender individuals who seek them.”

The study found that for those who underwent surgery, the likelihood to receive treatment for depression and anxiety disorders was reduced by eight per cent for each year after the procedure.

But undergoing gender-affirming surgery in Australia is a complex, multi-layered process.

“Like most things, surgery is so much more expensive in Australia,” Sian explained. “I could literally have the same doctor and the same product, whether it’s the implants or the anaesthesia, but in Thailand for example it’s at least 50 per cent cheaper. We’re talking breasts done overseas, $4,000 to $5,000 AUD. Here, in Sydney? $17,000*.“

The government says gender affirmation surgery can cost up to $30,000, depending on the procedures. But the ABC estimates that the “hidden costs” of the surgery can push that price up to $100,000.

Costs like these are driving some trans people to pursue surgery overseas. It is cheaper, but it also means making compromises. You compromise on the comfortability, because there’s a culture, landscape, and language difference. Navigating that on top of a life-changing surgery is something Sian just couldn’t stomach.

But before even discussing price, trans people first have to find the best specialist surgeon, one they’re comfortable with and who has an expansive knowledge of the trans health experience.

“It automatically restricts me in the pool of available surgeons,” Sian said. “And immediately those costs go up because of how advanced and niche the surgeons are.”

*The surgeon Sian chose, who she was most comfortable with and confident in, said breast augmentation would cost $17,000. This isn’t the case for all trans-experienced surgeons, and the price can vary. However, this is something cisgender women don’t have to take into account when asking for the same surgery. There are simply more surgeons available to cater to cis women.

It took Sian researching every single day for three weeks to find a surgeon she was both comfortable and happy with. Then she talked costs.

“Going through the numbers I thought, ‘Thank fuck I upped it to $50,000,” she exclaimed. “Because there was no way I was going to get all of these procedures done with my little budget of $25,000 when I’m telling you breasts costs $17,000 alone. Medicare doesn’t cover anything.”

It’s archaic, Sian said. The thought makes her feel all the emotions you can assume and imagine. Her hope in the current government for change is diminishing too. She wants change, but she doesn’t know what that looks like. There is just a chasm between the current system and an understanding of the trans experience.

“The unfortunate thing is that the language that I’m equipped with to articulate my concerns aren’t met with understanding, because that understanding and that truth is not their experience,” Sian said. “For me to say, ‘I live in a cis world’, they’re not going to understand that because it’s not their truth.”

“You’re trying to explain that these are not cosmetic surgeries, these are life-changing, life-saving surgeries that, for some trans people, are necessary to alter their overall life experience in a positive way. But explaining that to people who can’t understand that, because it’s not an imminent threat – it’s not a virus – I think that’s the toughest part.”

For Tennille, they believe education – a genuine openness to learn and relearn certain ideas – is the bare minimum. That’s why they created the petition.

“It’s about getting the attention of the minister of health [Greg Hunt] and the minister for government services [Stuart Robert] and telling them, “Hey, this has to change,” Tennille said. “You need to do something and you need to do it now.”