EX FILES: 6 Red Flags That Mean Your S/O Isn’t Over That Person You Hate

Like the edge of an island bench to the hip, exes are an inconvenient and unfortunate reality of dating, and life.

Call me an irrefutably insecure baby, but there’s not much I dislike more than hearing about my partners’ ex-huns.

wen he brings her up

Of course, some conversation regarding exes is important in the budding stages of any stable relationship. Learning about past relationships and the subsequent fallouts can provide you with valuable insights into the person you’re now regularly dutch-ovening.

But there’s a fine line between your partner mentioning the past to improve the future, and lingering ’cause they got an antibiotic-resistant case of the feels.

Suspect your current squeeze is still harbouring love and devotion for their ex-boyfriend or girlfriend? Then take a moment, read the following six red flags and weep, fam. If you strongly relate to more than five, I’m afraid you might be a a red hot rebound, babey.

THEY RELATE THE TRULY UNRELATABLE TO THE EX

We’re kicking this list right off with the largest and rudest of all offences: the shameless bring-up.

Regardless of time or place, your partner is fighting tooth and nail to somehow slip their ex into everyday conversation.

“Do you butter your toast, even if you’re using peanut butter as a spread?” Matt* asked me as he waited for the linseed sourdough to pop. “Yeah, of course I do,” I replied, confused by the pointlessness of the question. “Heh, good. Sarah never liked using butter.”

“Funny you say that, Matt, because I actually don’t give a flying fuck!” is what I felt like saying. Instead, I bit my tongue and wondered why on earth he would share such a shitty, inconsequential piece of information with me.

Turns out, he was hung up on Sarah. (I’m not sure why, since anyone with half a brain knows butter is the real MVP.)

THEIR MUM STILL TALKS ABOUT THE EX

If Matt’s senile mother Rhonda still has an old photograph of butter-bashing Sarah up on her kitchen cork board, you’re fresh outta luck.

Despite your partner’s mother not being the person you’re actually dating and/or sleeping with, in most cases, her point sadly counts for something. If she still believes Sarah to be the woman Matt should have married, you may as well throw in the crochet towel she gifted you for Christmas now.

On one end of the ex-spectrum, there can be too much left over love. On the other, there’s severe bile.

You see, the “my ex was crazy!” rhetoric is so friggen widespread that you’d be forgiven for thinking it isn’t a red flag. But as the old adage goes; ‘What Susie says of Sally says more of Susie than of Sally.’

If your man or womanfriend is constantly berating their ex-partners, it could mean a few (or all) of the following things:

1. They’re still hung up, or hurt by the past relationship.

2. Your partner lacks common decency. This person they’re calling a “lazy piece of shit” was once a major player in their life.

3. If (or when) you break up, they’re probably gonna call you some nasty names as well. Let that sink in.

4. Their ex actually was the kind of manipulative rotten eggfart who would turn up unannounced at our house at 1AM reeking of cheap piss, durries and regret, and refuse to evacuate the premises even after she realised his new bae was over. (True story.)

THEY TALK ABOUT THE EXES’ SEXUAL PROWESS

When I was a 16-year-old virgin, I met my first boyfriend. He was seven years my senior (a fact that I find low-key disturbing now that I’m an adult, but I digress).

Despite the age difference, we were in love, and I always wanted him to be happy.

I was never made to feel particularly forced into anything in the bedroom, but I’ll never forget when he whipped out the ex-card to invite me into a spot of… ass play.

me in that very moment

As mentioned, I was sixteen and had barely experienced the full glory of P in V sex – I really wasn’t ready for fudge packing.

Safe to say I stuck to my vaginal-powered guns and refused – but his comments hung over me like a thick, farty cloud for months afterwards. Moral of the story – if ya boy/girl talks about past sex they’ve had to intimidate, hurt or “impress” you…

THEY PRETEND THE EX DOESN’T ACTUALLY EXIST, AND NEVER DID!

White lies are hard to successfully commit in this digital age.

Because if you’re anything like me, you’ve got the stalk locked down.

You’ve leisurely perused all of your boo’s ex’s ‘Public’ albums on Facebook, read a smattering of embarrassing tweets they deployed in early 2010 and you’ve successfully nailed a deep lurk of their Instagram without committing this generation’s form of the social suicide – the accidental double tap.

That’s why you might feel a teeny tiny bit confused when your partner denies ever having been in a relationship with the girl who stares out at you through a Valencia filter in his 108-week Insta post.

What does this mean? Perhaps your current sweets is living a life of denial.

THEY PLAY DIRTY AND COMPARE YOU TO THE EX MID-FIGHT

We’re all human, we’ve all got our great features and a few grim flaws. Marilyn Monroe (and your 60-year-old Aunt-in-law who regularly shares the below inspirational photo on Facebook) preach this sentiment. 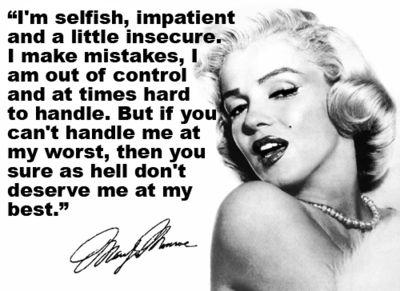 Fact is, when you’re in a relationship with someone and you’re spending a lot of time with them, your good and bad bits are bound to be amplified and in turn… annoying as fuck.

This frustration can result in a heated argument, and in worst cases, a nasty comparison of your shittness to the ex’s good qualities.

Being compared to someone else in a negative way is never fun – and it’s mighty, erect pole upon which to raise a ruby red flag.

Oomph, and there it is. Good luck and godspeed, daters.