Another glorious Monday means another equally-glorious episode of 15 Minutes, the Facebook Watch series in which we travel around Oz each week reliving the most iconic viral moments in history, and those responsible for them.

This week’s peak behind the meme curtain sees co-host Nina Oyama visit Chestbrah to discuss all things Stereo, steroids and the significant legacy left behind by his late younger brother Zyzz.

For those of you who need some reminding, Zyzz and Chestbrah essentially pioneered gym meme culture in the lates ’00s, coining terms such as ‘you mirin’ and ‘shredded for Stereo’. Zyzz, in particular, established a cult following until his untimely death at the age of 22 after suffering a heart attack. 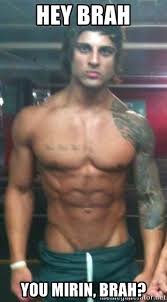 In the latest episode of 15 Minutes, Chestbrah talks candidly about Zyzz’s demons. “He was very, very insecure, and he was in a lot of pain and a lot of hurt… because deep down he was still that skinny kid.”

Zyzz’s rapid rise to notoriety, Chestbrah also notes, took its toll. “He’s had the body of his dreams, and all this fame thrown at him, in 3 years. For a young 22-year-old, that’s a lot to take in…”

According to Chestbrah, his younger brother definitely would have changed a few things if he had the chance.

“He would have slowed down – like, he was smart. He would have wisened up and realised, like, ‘I’ve just got to chill out.’ But that’s a lot to take in for a 19-year-old – that amount of fame to hit you that hard. Because of that pressure, he started using more drugs, more steroids…”

“Honestly, if you’re not ready for it,” he considers, “fame can really fuck you up.”

Check out the full chat between Nina and Chestbrah below.

In the mood to catch up on all of that meme goodness? You can watch episode 1 featuring Mick Merhi AKA “Not Bhed, Good Soyze”, episode 2 with ol’ mate Will “Egg Boy” Connolly, episode 3 with human reaction GIF Josh Saunders, episode 4 with Ur Boy Bangz, episode 5 with none other than Shannon Noll, last week’s episode with Olympic gold medallist Steve Bradbury. (They’re really piling up now, aren’t they? Perfect fodder for meme binging, tbh.)

Catch a new episode of 15 Minutes every Monday at 7pm – only on Facebook Watch.