Last year, Microsoft announced that it would be launching its very own game streaming service called Project xCloud, allowing gamers to stream console-quality games to just about any device with a screen and an internet connection. During E3, I got a chance to use the service and have a quick chat about it with Xbox executive, Mike Ybarra.

Essentially, xCloud takes advantage of Microsoft’s cloud infrastructure known as Azure to do all the heavy lifting required to run a game, broadcasting the live image straight to your device over the internet. In other words, it outsources the need for a hefty PC or console and allows you to play almost anywhere you want on something as small as a smartphone.

It’s a concept that many companies are starting to get behind, with Google being the latest to announce its own service, now known as Stadia. While the idea itself is great, many have wondered about its feasibility and performance, particularly here in Australia where our internet is less than great.

During the Xbox Showcase at E3, I had a chance to get hands-on xCloud, which, in this case, was playing Halo 5 on a smartphone fastened to an Xbox controller with a sweet little contraption. I was able to play through the game without any noticeable latency, which is definitely a good start. I was also particularly impressed with how it looked. It didn’t feel like I was looking at a video broadcast of a game, it felt like it was actually running on the device. The image was clear and the graphics looked crisp as hell.

While a controller will likely be the preferred way to play, support for touchscreen controls will also be available for some games. All in all, I was surprised by xCloud and its performance, but using it in a controlled environment in the US doesn’t really clear up whether or not it’ll work well in our home country. The good news is, we have four Azure data centres across the country, so in terms of infrastructure on Microsoft’s side, we’re in good shape.

I put the question to the Xbox AU team earlier this year but didn’t really come to a definitive result based on that. To be fair, though, it’s not going to have a concrete answer one way or another given there are so many factors to consider. You can read more about that below.

Realistically, there’s not going to be any of knowing how xCloud will run down under until we try it, which will likely be closer to October when the company plans to reveal more details on the service. When I asked Ybarra whether internet speeds in other countries influenced the development of game streaming, he told me it’s more about offering the option than anything else.

“We’re very focused on choice,” he told PEDESTRIAN.TV. “If people want Game Pass, it’s all downloadable to the local device and playable with the full fidelity, rock and roll. If you wanna do the cloud, we’ll offer that too.”

While our speeds might not be perfect right now, it’s important to consider the future when it comes to game streaming. In terms of mobile internet, we’re not doing too bad at all, and when 5G eventually rolls out en masse, we’ll be doing even better. With faster mobile connections comes bigger data plans which will be able to handle stuff like game streaming, so the dream of playing console-quality games on your commute isn’t too far off, even if it seems farfetched right now. It wouldn’t even surprise me if telcos offer free game streaming data the same way they do with Spotify and Netflix. 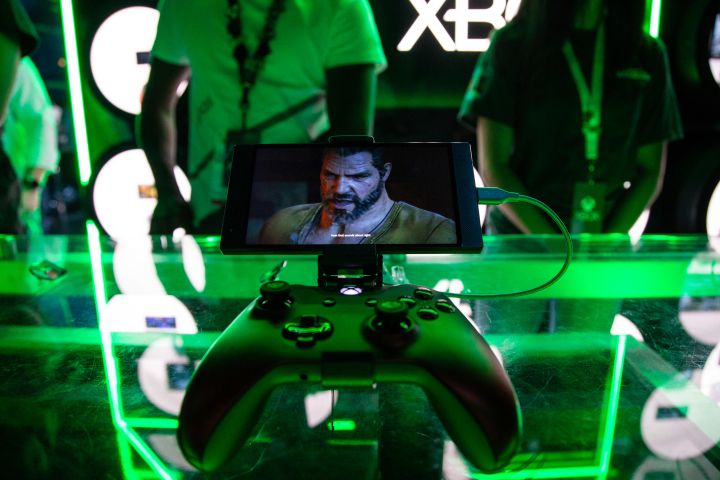 Ultimately, this is a good thing for the games industry, and as Ybarra put it, “the more choice we get, the [more] crazy growth in gamers we see”.

“The fact that we offer things like xCloud, it’s just another option to experience the games that we all know and love.”

Of course, this means Microsoft will still be developing and supporting traditional gaming hardware, so there’s no need to freak out about having to throw out your Xbox and subscribe to cloud-based gaming. “Anywhere means we need to be investing in Windows and xCloud and the console,” Ybarra said.

Apart from commute gaming, which is the first use case everyone thinks of for game streaming technology, xCloud will also help gamers in their homes. If they live in a sharehouse with one TV, for example, they don’t have to hog it for hours at a time. Microsoft will let them stream their entire game catalogue from the cloud, or even from their own Xbox.

It’ll be interesting to see what the company reveals in October in terms of further details, but it should be an exciting time for gaming. While traditional PC and console setups aren’t going anywhere, a new era of accessible, portable gaming is upon us. Get pumped.