The classic theme park murder simulator, RollerCoaster Tycoon, turns 20 this week, and what better way to celebrate than with some of the most cooked creations ever spawned by its players.

On March 31, 1999, RollerCoaster Tycoon hit PCs all over the world, becoming a Sim City for the wildest, weirdest, and funniest digital rides ever conceived. If you’ve never played it, allow me to give you a brief rundown.

The only objective, realistically, is to have fun. You can make a park that sucks and makes no money, but if you had a good time doing it, you win, my friend. If you’re playing seriously, you might be into trying to make the most profitable park you can, or the biggest, most elaborate rides possible. If you’re a total sadist, though, you’ll be like scores of players who make rides that never, ever end.

That’s the best part of RollerCoaster Tycoon, there are simply no rules. Hell, you can make a coaster that launches riders straight into a goddamn lake if you want to. Let’s look at some good ones.

To get things started, I’d like you to have a look at the park below, which covers every single grid on a single map. Simply put, it’s enormous, folks. Look at the detail in that bad boy. Each sector is themed and has its own unique custom rides. Have a look at some closeups below. Posted to Reddit, it’s creator says it was a project which spanned ten whole years. That’s one helluva hobby. If you wanna have a look at a high definition image of the whole thing, you can do that here.

The Wheel Of Life And Death

Ok, enough of this playing the game normally business and onto the reason you really came here: torture rides. This one is called The Wheel Of Life And Death and it’s one giant ride spanning an entire map.

Look at this thing. LOOK.

Something about the Gregorian chanting makes it so much funnier. At one point, the player shows the stats of a patron who’s been sitting on the ride for a casual 63 hours, which is chill. Needless to say, he’s not happy about it.

As the name suggests, this motherfucker is a slow burn. In fact, it takes riders 210 real-world days to finish, which is a staggering 3,000 years of in-game time. I would argue that this is too long to be on any ride.

See it in action below.

Posted by an anonymous 4Chan user, this ride, in particular, became a bit of a meme. According to Know Your Meme, it “lasted four years of game time for each virtual passenger and included an exit path that led back to the entrance of the ride, creating a never-ending loop.” Vicious. 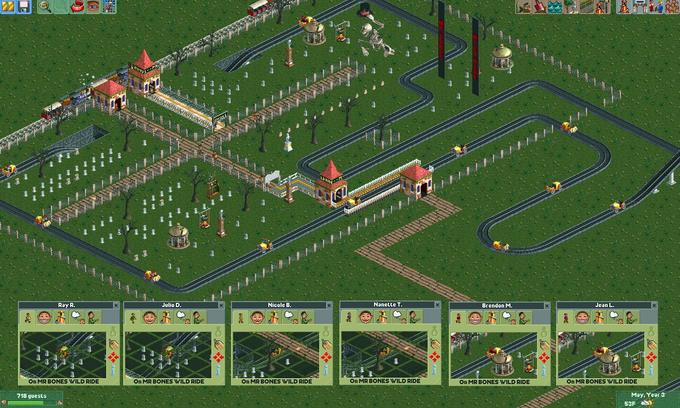 I can’t find any video footage of it, but there is a heap of videos explaining it for some reason. Look, the gist is, it’s a long-ass ride.

Quite simply, this is a maze so big, those who dare to enter may never emerge. Behold, the big maze.

Created by a user known only as RogueLeader23, it leaves people hungry, thirsty, and wishing for a swift death.

Look, there’s no real story behind this video other than I think the poster, Poopdoodleable, really encapsulates the joy of pointless death-dealing rollercoasters with their compilation video. There’s some real good ones in there, folks, have a look for yourself below.