Have you put much thought into what you’d do in a catastrophic emergency? The kind of global clusterfuck that results in mass casualties and complete and total anarchy. What would you bloody do, champ?

Given the current state of the world and the kinds of incompetent shit stains in charge, I think about Sydney being nuked at least once a week. Unfortunately (or maybe fortunately, given how painful the death would be otherwise), I work close enough to the CBD that I’d probably be vaporised instantly.

But then there’s the less-likely event of a zombie outbreak. What happens when motherfuckers start foaming at the mouth and develop a penchant for devouring human flesh? Jesus, what then? Welp, I can’t speak for specifics, but I can tell you which cities will fall fastest to an outbreak and which are the safest.

To celebrate the release of zombie survival game, State of Decay 2, Xbox ANZ teamed up with Melbourne University’s Centre for Disease Management and Public Safety (CDMPS) to devise the Zombie Survival Index (ZSI). Essentially, it provides a ranking for how each city would fare in such an event, the lower the better.

The CDMPS based the rankings on criteria like potential rate of infection, situational analysis of the infection’s origin, how it would spread, how folks claim they would act in such a situation, and how well each city could defend itself based on its geographical location.

Bad news Perth – you’re fucked. Estimates suggest 100,000 residents of the WA capital would become infected in just 4 days. Sydney would be the next to fall, followed by Melbourne, leaving Darwin as the best place to defend itself thanks to its isolated location. I’m not entirely sure why Brisbane and Adelaide were omitted. Maybe they’re already full of zombies. 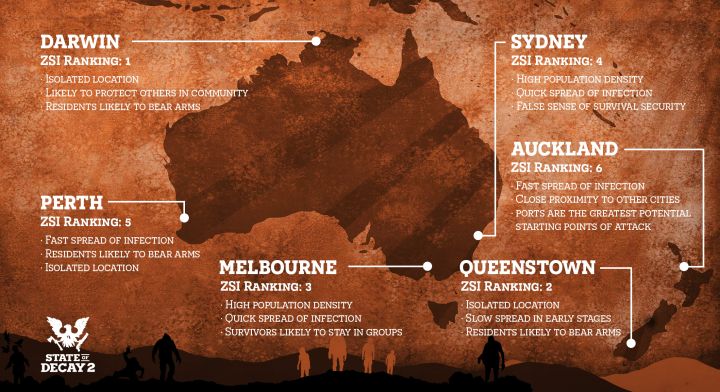 As you can see, anyone living in Auckland is more fucked than all of us. Bummer.

According to a survey of 1,000 people, nearly one in five (17 per cent) would try to dress and act like a zombie in order to avoid getting bit, and 3 per cent would simply hide under their beds. C’mon folks, you’ve all seen the horror movies, that’s almost worst than the bloody wardrobe.

If video games have taught me anything, it’s that you should really stick with people you trust, take heaps of supplies, and find the biggest gun you possibly can, which would definitely be tricky. Fingers crossed we never have to worry about anything like that.