It’s been four years since Valve announced it was keen for online PC game platform, Steam, to support the Aussie dollar, and now it finally does.

From today, Steam will gladly give you digital copies of video games in exchange for your hard earned dollarydoos and from what we can see, it all works out about pretty similar price-wise compared to before, if not, a little cheaper when you factor in any foreign exchange fees tacked on by your bank.

It’s great news for Aussie PC gamers, but the launch hasn’t exactly been a raging success. As Kotaku Australia points out, a lot of games previously available to us in US dollars are now unable to be purchased at all. The most notable example of this is Warhammer: Vermintide 2, which, as you can see below, is missing the price and add to cart button. 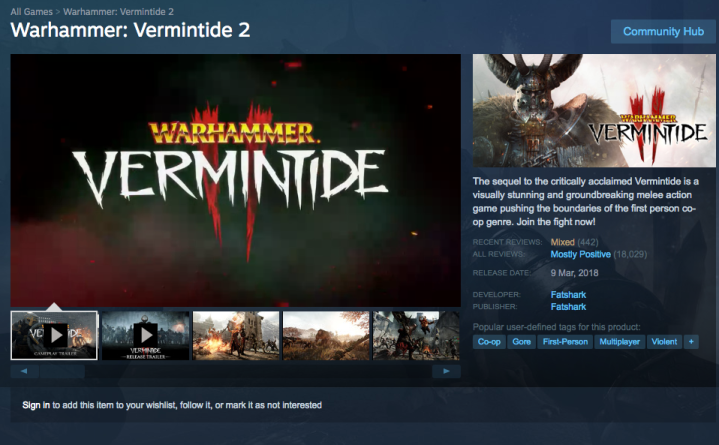 Luckily, it seems to be a temporary issue but has affected a pretty long list of games. On Steam, if a developer doesn’t set a price for a particular currency, it won’t be made available in the region that uses it. I guess that task wasn’t high enough on the to-do list of many publishers.

It’s great that we can now buy digital PC games with Aussie bucks, but it would sure be fucking swell if overseas publishers would stop forgetting we exist. Hopefully the issue is resolved soon.