‘Rage 2’ Mashes ‘DOOM’ With ‘Mad Max,’ But It Does One Better Than The Other

Bethesda‘s upcoming sequel to the 2010 post-apocalyptic shooter, Rage, is set to become one hell of an open-world experience, but my second chance to play the title has cemented one aspect firmly – Rage 2 is at its best when you’re laying waste to its enemies.

Unlike the first time I got my grubby hands on the game, this playthrough was roughly two hours long and gave me access to a large part of its world, and while there was plenty to do in the vast wasteland, I had the most fun during tense gunfights experimenting with the incredible number of ways to destroy my foes.

Rage 2 gives you a huge set of tools with which to rain down carnage on your enemies. Along with a collection of standard and some rather insane weapons, you also have special abilities which are added throughout the journey. They range from simple actions like a force-push kind of thing to giving all your weapons insane powers for a short time to all sorts of exotic shit no one’s even seen yet. And on top of all that, there are items like the wingstick, which is essentially a bladed boomerang, and a suite of wild grenades, each with different effects. In other words, there’s a huge variety of ways to make wasteland freaks hurt, and they all rule, particularly in a combo situation. I knew this when I played Rage 2 back in June last year, but I’m now far more aware of just how important that’s going to be when release rolls around in May.

While shifting your thinking away from simply mowing down enemies with different guns, pulling off wild combos is insanely satisfying. For example, I ran into a room of goons at one point, locked my wingstick onto one of them, blasted two others with my shotgun, then force-pushed two more at close range, simply turning them into mush. This all happened at a speed John Wick would be proud of.

Of course, it makes sense that combat would feel good, given Rage 2 is being co-created by id Software, which is famous for first-person shooters like DOOM and Wolfenstein, both of which feel present in this title. On the other side of the coin, the open-world aspects are being handled by Avalanche Studios, which did the latest Mad Max game.

During my playthrough, I was tasked with tracking down an asshole named Klegg Clayton, but to get into his exclusive club, I had to gain a certain level of notoriety, which would happen in two ways. The first was to take part in a televised battle to the death, and the second was to win a destruction derby-like race. Both events were located in different parts of the world, so I was excited to finally venture out into the expanse of Rage 2.

Driving around a huge desert spattered with enemy outposts felt pretty cool, and what struck me immediately was how much there is to do. By simply driving to the main objective, I was presented with organic activities without needing to stop and explore (which is certainly something that’s encouraged, also). For example, I got a few radio distress calls from folks in need of help, which mostly meant picking off the small convey pursuing them with my ball-breaking beast of a vehicle.

While it’s certainly too early to make any definitive calls, I will say I had far more fun destroying enemies in confined spaces than I did out in the open, which is certainly a credit to the DOOM-like influence id has managed to insert into the open world of Rage 2. That’s not to say everything else isn’t as good – it’s still very fun – it’s just an interesting blend I’m curious to see in its final form. Bringing the two elements together is not an easy feat, and I’m hoping the combination feels refined in the final product.

After battling my way through hoards of freaks on Mutant Bash TV, I was halfway to gaining the fame needed to infiltrate Clayton’s lair. The next stop was the ChazCar Derby, which is essentially just a race. My favourite part of this, though, was the music, which was a playlist of the straight-up crusty kind of hardcore and punk I’d go out of my way to listen to, so I was in my element. It suits the entire mood of Rage 2 incredibly well, not to mention a fast-paced death race such as this. 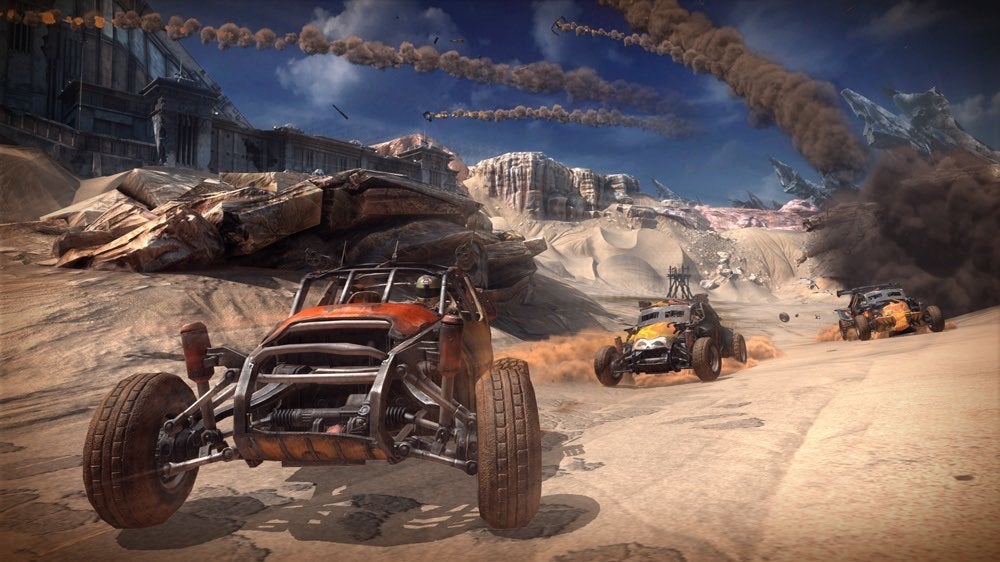 It took me a few goes, but I eventually won the race and returned to Clayton to take on his goons. I won’t give away too much, but I will say the boss fight here was pretty fucking challenging, so be prepared for things to get tricky from time to time.

All in all, Rage 2 is shaping up to be a great time. It grants players a diverse and interesting open world but shines brightest in moments of frantic and intense combat. If the final product can successfully marry the two, it’ll be unstoppable.