Panic Inc, the studio behind the award-winning game, Firewatch, has announced a neat little handheld device called Playdate. Yes, that is a crank hanging out there on the side and no, it doesn’t power the unit.

The crank is actually part of Playdate‘s control scheme, meaning it’s used as an actual game mechanic. It also features a 400 x 240 black and white display, a d-pad, and two buttons. The crank was designed in conjunction with Teenage Engineering and, by the looks of it, seems pretty sturdy.

According to Playdate’s official Twitter account, some games will use the crank exclusively, and some won’t use it at all. There’s also a cute little nook you can tuck it into when it’s not in use, which kicks ass.

You can see the crank in action below.

About those games. We reached out to some of our favorite people, like @KeitaTakahash, @bfod, @helvetica, @shauninman, and many more.

Here's a peek at one: Crankin's Time Travel Adventure, from Keita. It's fun and funny. pic.twitter.com/0Ibwqr5k3I

Panic has been working with a bunch of creators to make games for the device, including Katamari Damacy‘s Keita Takahashi, SpellTower‘s Zach Gage, QWOP‘s Bennett Foddy, The Last Rocket‘s Shaun Inman, and more. The approach to delivering these games is pretty damn interesting, as well.

“But here’s the trick: every game is a secret,” one of the tweets reads. “They’re all included with [the] system, and they will be delivered to you each week, for a few months. Our dream is simple: that you wake up on [a] new game day excited to see what you can play next.”

The games will be released in seasons, the first of which will have twelve different titles. You can see a teaser image for four of the first lot below. 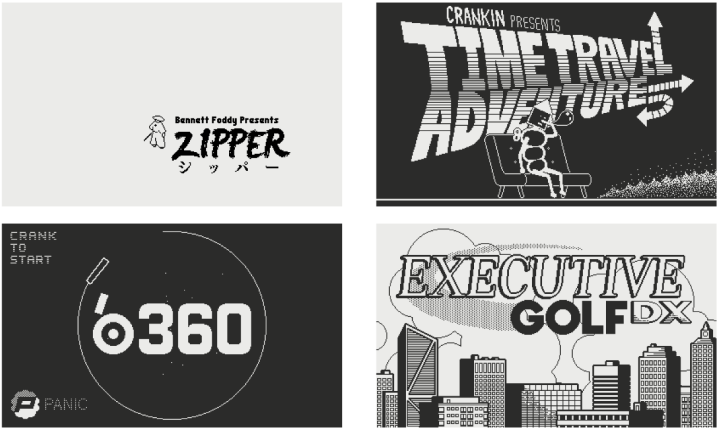 Playdate will be released in early 2020 and cost US $149 ($217). According to Playdate’s website, the team is still figuring out which countries they’ll ship to, so fingers crossed Australia makes the list. You can sign up for email updates here if you’re keen to keep an eye on it, which also features a cool 3D model of the device you can play around with.

There’s some more info and pictures available in the Twitter thread below, as well.

It fits in your pocket. It's got a black and white screen. It includes a season of brand-new games from amazing creators. Oh and… there's a crank???? https://t.co/WiIPUkpjSq

It’s a pretty cool idea which mixes retro gaming with new ideas. I hope it makes it out to us.