After recent rumours swirled about a disc-less Xbox, Microsoft today unveiled the Xbox One S All-Digital Edition, which does exactly what it says on the tin.

The disc-less unit looks pretty much exactly like the standard Xbox One S, just without the disc drive, obviously. It’ll include a 1TB hard drive and game codes for Minecraft, Sea of Thieves, and Forza Horizon 3. Otherwise, the console will be exactly the same as the current One S.

Microsoft announced the console’s release date as May 7, but it won’t be in Australia until later this year. The company says it hopes to “share more details on local availability and pricing in the coming weeks”.

In the US, the All-Digital Edition will be priced at $250, which translates roughly to $349 AUD at the time of writing, which is the exact price of a current One S console from the Microsoft Store. I’d wager the entry point for the All-Digital locally will be dropped to at least $50 less as it is overseas. 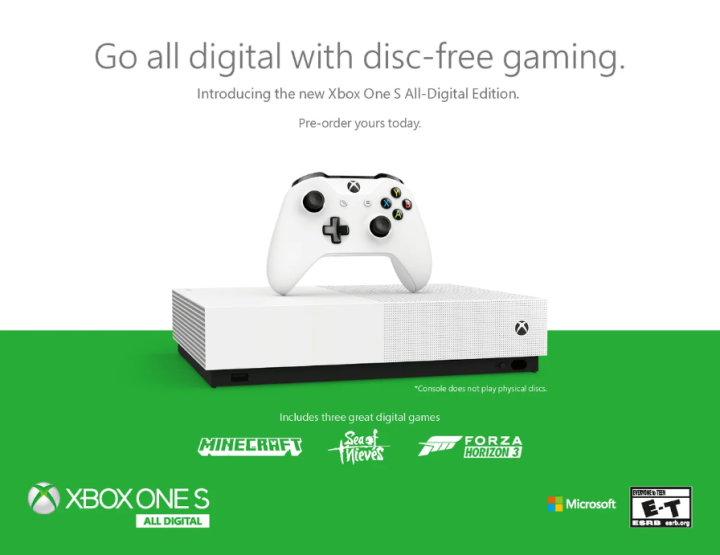 “The Xbox One S All-Digital Edition is $50 USD less than Xbox One S and we expect to maintain at least this price difference between the two consoles,” general manager of platform and devices marketing, Jeff Gattis, said.

“As the Xbox One S All-Digital Edition is designed to make console gaming more accessible to more people, especially for new customers that don’t already own a console and want access to the complete Xbox experience without investing in one of our other options, Xbox One X or Xbox One S.”

Microsoft is expected to reveal more at this year’s E3 on the 9th of June, including news from the company’s recently acquired studios who have “things to show,” Xbox head, Phil Spencer, said recently. It’s safe to say big things are coming, folks.