Not even a year after Far Cry 5, Ubisoft is gearing up to release the next entry in the series, Far Cry New Dawn, which is set in a post-apocalyptic version of 5’s Hope County. While this gives the world a level of familiarity, a number of gameplay tweaks are putting a fresh spin on an old formula.

I got to play around three hours of New Dawn yesterday before sitting down for a chat with associate narrative director, James Nadiger, who told me about what players can expect to see from the previous title, the new weapon upgrade system, and how real-world doomsday theories play into the two warring factions.

At the end of Far Cry 5, the world was ravaged by nuclear war, forcing survivors underground until it was safe to emerge and rebuild. New Dawn takes place in the same Hope County, but a little while after life returned, where humans learned to work the land and live peacefully. Of course, this all goes ass-up when a hostile group called the highwaymen show up and take everything. Believe it or not, these two factions are based on actual post-apocalyptic theories for survival.

“We consulted with a couple of meteorologists who actually make models of possible doomsday scenarios and they work with governments and stuff, and overwhelmingly, the two main paths of survival [are what] you see in the game,” Nadiger told PEDESTRIAN.TV. 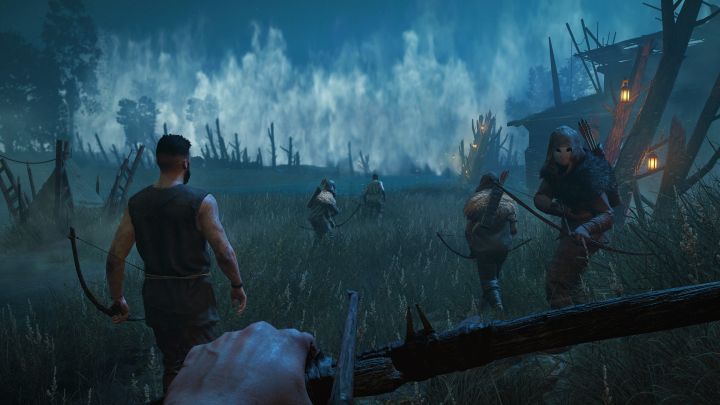 “The survivors can sort of work the land again, grow crops, hunt, they can’t have farms on the level we saw in 5, like no cattle, but chickens, sheep, that’s sort of the new thing, and that’s one path. It’s a lot of work, it’s still kind of day-to-day, but you can build a good life for yourself.”

But the other scenario for survival, he says, is to essentially become a roving pack of assholes. “If you don’t have that specialised knowledge, you don’t have those skills, then you get a little desperate and you gotta get good at taking stuff, so it was just sort of a clash of these two styles of getting by in our Far Cry apocalypse.”

The Far Cry franchise is well-known for having some pretty wild antagonists. Characters who ooze personality and violent flamboyance in a way that adds a whole new layer of intrigue to the experience. New Dawn is no different, introducing two female villains known as The Twins.

“For The Twins, we’ve wanted to have a woman as a villain in Far Cry for a long time and JS, our creative director, was really keen on the idea of having two villains, having twins, because it shakes up the Far Cry thing of that one-on-one conversation,” Nadiger said. “Not only are they dealing with you, but how do they share that power, how do they each react to you as you’re getting to be more of a pain in their ass?” 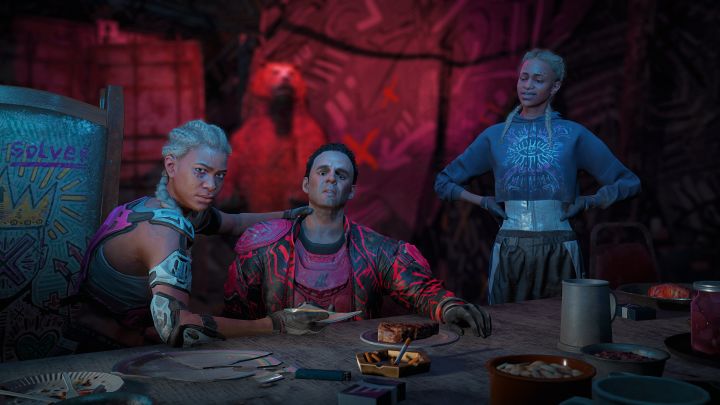 If you’re familiar with Far Cry 5, you’ll know the name Joseph Seed, the truly insane cult leader who lead a militant regime of fanatics in the Hope County of yore. He and his cult make a return in New Dawn, and it looks like you’ll be working alongside him this time, the latest trailer suggests.

But even if you didn’t play the previous game, Nadiger tells me that New Dawn is “designed to be a standalone sequel”.

“If you have [played Far Cry 5], then you’re gonna see some old friends and some old enemies, whether in Prosperity or as you explore. We have a good mix of returning characters from 5 and new characters.”

In terms of gameplay, you’ll still be running around an open world, clearing enemy outposts, and completing missions for various characters, but there are a few new elements which are sure to keep things feeling fresh. Beyond a lush, reborn Hope County, Ubisoft has added what they call “light RPG” elements to New Dawn, which is mostly made up of a level system.

Enemies will have a level based on how difficult they are to bring down, and this level corresponds to the level of your weapons. A level one gun will bring down a level one enemy no problems, but will struggle a bit with a level two enemy, and so on. There’s a huge range of weapons across all four levels, with tons of variety to mix up how you like to play.

“Far Cry’s all about player choice, so I think even in adding the difficulty, we wanted to make sure there were weapons to suit every play style,” Nadiger said. “So if you’re more concerned with stealth, then we have a bunch of stealth options.”

“So even though you do have to rank up weapons and craft better weapons, you don’t feel forced to play outside of the way you want to play, and it’s the same with the perk points.”

Because the vibe is very much a case of survivors making do with what’s available, all the weapons feel thrown together in a way that’s quite creative. There are also weapons that are just downright ridiculous in the best way, like a gun that shoots sawblades, which is wildly fun to use. 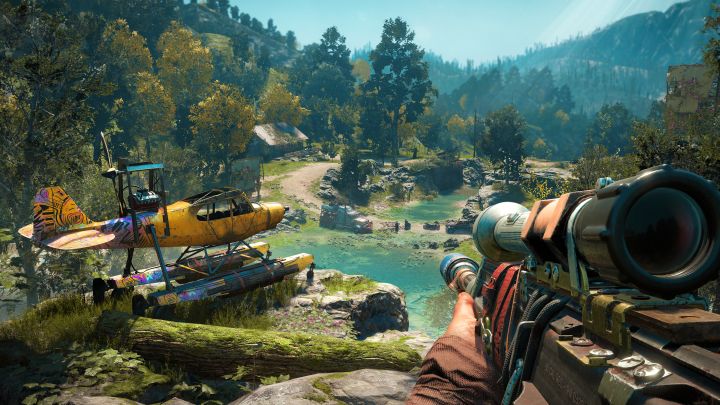 While capturing outposts is still a part of New Dawn, there’s a new option to squeeze their resources and abandon the post instead of taking it over. If you choose to do this, the highwaymen will come back and take up that outpost again, but they’ll be stronger, have more alarms, and generally become more difficult to kick out. Again, this plays into the idea of difficulty levels, but also adds a layer of replayability.

There’s no Arcade Mode this time around, but instead, New Dawn introduces the concept of Expeditions, which are standalone maps that change each time you play them. The idea is that the highwaymen have outposts all over the country, so with the help of a helicopter pilot, you can go on missions to steal resources from various locations outside of Hope County.

“For the experience of New Dawn, the concept of arcade doesn’t exist, so we just decided to focus on the world of New Dawn, but what we’ve added as sort of a remixable thing, is the Expeditions,” Nadiger said. “Every time you complete one, it gets tougher and different gameplay elements get remixed so it’s a fresh experience every time.”

Everything I’ve played so far feels exactly like a Far Cry title, so don’t go in expecting a total overhaul – New Dawn is very much built on the foundation of Far Cry 5 – but it’s surprising how much a few little tweaks here and there can make the familiar experience feel fresh.

If you’re waiting for Ubisoft to shake up the Far Cry formula in a big way, you won’t find what you’re looking for here, but if you liked Far Cry 5, you’ll probably be pretty pleased with New Dawn, which you can pick up on February 15 for PC, PS4, and Xbox One.