If you interact with gaming content on Facebook, you may see a new section pop up just for you pretty soon. The platform announced today that it will begin rolling out a section for Facebook Gaming.

Along with all of the Farmville-esque games your aunty Janet is still into, it’ll also be a place for general gaming content, game streaming, and more. Whether you’ll get the tab on your Facebook app’s navigation bar will depend on how much you interact with gaming content on a monthly basis, but either way, you’ll be able to access it via the bookmarks section.

“We want to make it easier for people to find and connect around their favourite games, streamers, groups, and more,” VP of Facebook Gaming, Vijaye Raji, said in a release. “So today we’re starting to roll out a dedicated Facebook Gaming tab in the main navigation bar that will be a central home for people to discover, play, watch, and share gaming content personalized for them.”

The new place for gaming will become the “primary home” of Instant Games, which are the same ones you can also access through Facebook Messenger. It’ll also help you find and connect with gaming groups, and watch videos from “top streamers, esports organizations and game publishers”.

The new section will also nudge you into the direction for new streamers, games, or groups you might like based on what you already like and interact with. 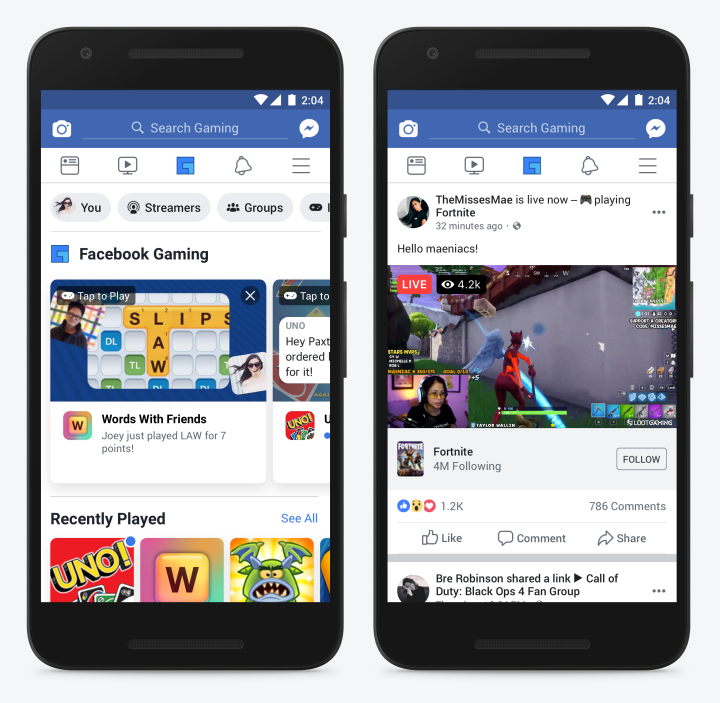 “We’ll start rolling out the Facebook Gaming tab to a small subset of the more than 700 million people who enjoy gaming on Facebook each month,” Raji said. “Over time, we’ll expand access to more gaming enthusiasts. People who don’t see the tab in their main navigation bar can find it by going to the Bookmarks menu.”

READ MORE
No, People Are Not Actually Calling The Cops About The Facebook Outage

So whether you’re into playing Facebook games, talking about them, or watching them, it’ll all have a new home on the platform pretty soon.