As indicated by the recently released GDC report on the State of the Game Industry in 2019, 18 per cent of game developers say they’re currently working on games for the next generation of consoles.

In other words, there’s already quite a bit going on for the next Xbox and PlayStation, despite neither of them being announced yet. I wouldn’t take this as a hint that an announcement is looming in the near future, but it’s certainly worth noting.

It also makes sense given a number of developers have already announced upcoming next-gen projects. For example, Bethesda announced at E3 last year that they’re working on new IP called Starfield, as well as Elder Scrolls 6, which will release at some point after the former. It’s also pretty safe to assume that Rockstar has begun work on Grand Theft Auto 6, which has likely ramped up now that Red Dead Redemption 2 is out in the wild.

Another thing to remember here is that games, particularly enormous AAA titles like the ones mentioned above, can take upwards of five years to complete, so just because we know next-gen games are in the works doesn’t mean they’re anywhere near release.

Naturally, the vast majority of developers are still creating games for existing platforms, so you can still expect to see plenty of content for whatever console(s) you have. Interestingly, the Nintendo Switch and PC are the two platforms which interest developers the most at the moment. 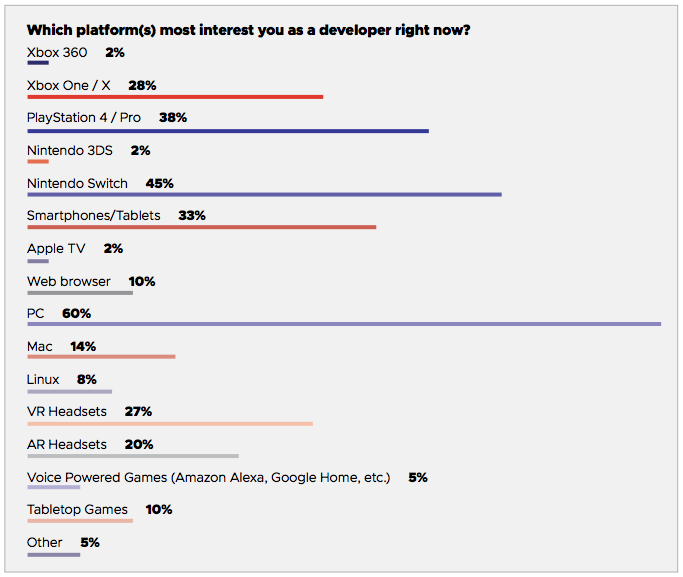 Will a new console be announced at this year’s E3? Personally, I don’t think so, but you can probably expect to see some impressive new titles regardless. Even though current gen hardware is reaching the end of its lifecycle, it’s still capable of running some incredible games. The amazing remake of Resident Evil 2 should be a testament to that fact alone.

I’d wager we’ll hear more about the next line of consoles in 2020. If you’re interested in more of the GDC report, you can check it out here.