The ‘Crash Team Racing’ Remake Is Nostalgic Bliss, But It’s No ‘Mario Kart’

Last week I got my grubby mitts on the upcoming remaster of 1999’s classic PlayStation title, Crash Team Racing, and while it certainly brought the memories of Saturday morning races flooding back, it left me wanting a little more.

Playing through three different courses, with one of them repeated for split-screen multiplayer, I was extremely impressed with how incredible CTR Nitro-Fueled looks. Graphics aside, just like the Crash Bandicoot N. Sane Trilogy, this revamped racer is the authentic gameplay experience of yore brought in line with the modern standards expected by players today. It achieves this without a doubt.

As Beenox‘s Stephane Gravel told PEDESTRIAN.TV, fans have been asking for a remastered CTR “for some time.”

“We’re just very pleased to be able to work on that game and bring them an original CTR experience but, of course, fully remastered for today’s standards,” he said. “We wanted to stay as true as possible to what we believe was already a great game.”

While there’s been no mention of new content – aside from online multiplayer and leaderboards – Gravel says that all of the original’s game modes, cups, characters, courses, and powerups will be available in the remaster. 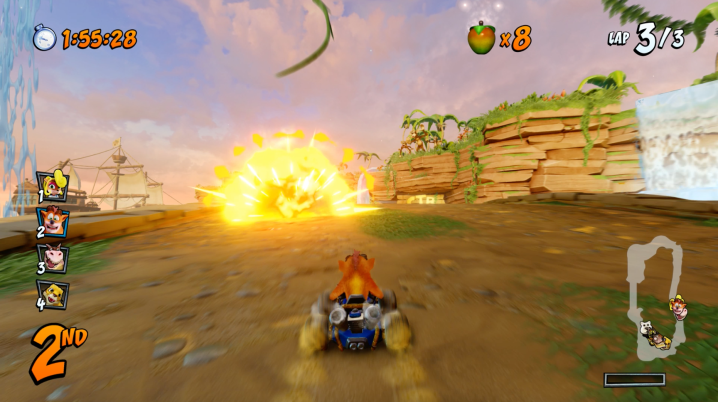 True to Gravel’s words, this is an authentic remaster of what CTR was 20 years ago. Kart handling is on-point and the powerslide mechanic, while quite tricky, is still there and allows for boosting should you be able to nail the precise timing required to do so.

While what I had the opportunity to play through was a lot of fun, I found myself constantly comparing the experience to Mario Kart, in particular, Mario Kart 8 Deluxe for the Nintendo Switch, which, I think most will agree, is the best and most comprehensive experience of the franchise so far.

In CTR’s defence, Mario and his mates have been zipping around Rainbow Road for quite some time now while Crash has been all but dormant since last year. What I’m trying to say is, Mario Kart has been honed to perfection over many years while CTR is only just returning from a lengthy hiatus. 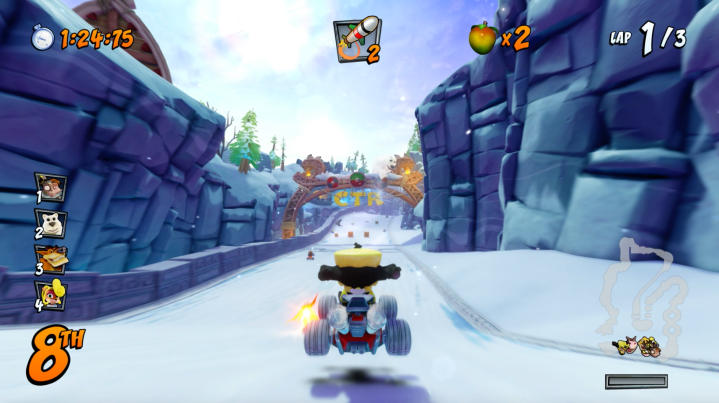 With that in mind, is it still a fair comparison to make? Well, when you’re attempting to break ground in the same space – as well as release on the Nintendo platform – yes, I think it’s fair.

The two are similar in a lot of ways but it’s the small differences which make each unique. The powerslide mechanic is one example, but it’s where each game channels its difficulty that stuck with me the most. CTR’s difficulty stems mostly from handling your vehicle, while Mario Kart’s is usually tied to each course in interesting ways, like altering the track slightly on each lap, for example. For me, the latter makes for a better experience.

It should be noted, however, that this isn’t in any way a final comparison of the two given I only got to play three tracks, but rather, my thoughts on it so far.

To be absolutely clear, CTR Nitro-Fueled is shaping up to be a great remaster. Fans of Crash Bandicoot and the original CTR alike will love what Beenox have done with it, but I simply can’t stop my poisoned brain from comparing it to not only the red-capped king of kart racing but also the recent remake of Resident Evil 2, which raised the bar for remasters and remakes to heights I didn’t know were possible.

CTR is going to be a ball, particularly if you have fond memories of the original, but for me, Mario Kart is still winning the race.

Crash Team Racing Nitro-Fueled will hit the PS4, Xbox One, and Nintendo Switch on June 21.