Game Informer recently published a lengthy piece on Bethesda‘s upcoming multiplayer RPG, Fallout 76, detailing new information on how the campaign side of the title will work, straight from the lips of company director, Todd Howard. Most notably, we now have a better idea of how finishing the campaign will benefit the player, and if you were to put it into a single word, it would be “nukes”.

While you’ll obviously be dealing with the threats associated with an online world, which mostly revolves around other players, Fallout 76’s campaign will function mostly how you’d expect based on the traditional games. In other words, the Bethesda has clarified that the online RPG is still “driven by quests,” the Game Informer yarn says.

In terms of story, the main quest line will centre around the disappearance of Vault 76’s overseer, who exited before everyone else and left behind secret instructions for the player to follow. Getting through the main story will reward you with access to nukes, which you can then use to blow up sections of the map, making them irradiated zones for a period of time which contain more valuable loot, but also stronger monsters. 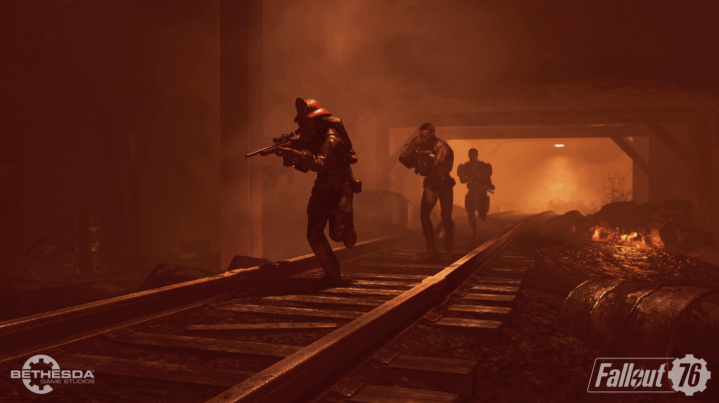 But this isn’t going to be something you can just breeze through. As Howard told us during an interview at E3, you’re going to need to be at a fairly high level to cop the codes required to access the heavy weaponry.

“That’s kind of, you know, part of the big end-game quest stuff, so we wanted something to strive for that was also cyclical, that you could do over and over,” he told PEDESTRIAN.TV.

“The codes kind of recycle, you have to find new ones and then the nuke state is temporary, it lasts a number of hours as opposed to being permanent.”

Howard also told Game Informer that the main quest line consists of “a lengthy, multi-part story that takes players across West Virginia“. As you’d expect with any Fallout game, there will also be plenty of sidequests to complete if you wish, but there’s no pressure to do those or the main missions if you simply wanna goof around with your mates and grief other players or whatever.

Quests will be highlighted with in-game markers in an attempt to proactively guide players towards interesting content, Howard told Game Informer. On that note, Bethesda also addressed the issue of griefing on a recent panel at this year’s QuakeCon, which is an issue that has many fans of the series concerned. In Howard’s words, “We turn assholes into interesting content”. You can read more about that in the link below.

Bethesda also recently dropped the last video in its You Will Emerge series, detailing multiplayer in Fallout 76. You can check that out for yourself in the clip below.

Fallout 76 is set for release on November 14 with a beta to run at some point in October. It’ll be available on Xbox One, PS4, and PC.

Discover more of the latest in video games and Nintendo news with Pedestrian TV.