The Assassin’s Creed franchise is certainly pretty packed these days, and it shows no signs of slowing down, either. Its next title, Odyssey, is set for release pretty soon, and I got to take it for a spin last week for a good three hours.

This time around, Ubisoft takes us to ancient Greece where you play as either the female warrior, Kassandra, or the male warrior, Alexios. After working through the prelude, which also acted as a kind of tutorial, I went with Kassandra and began my adventure on the starting island of Kephallonia.

Unlike previous AC games, I was given a new option for playing called Exploration Mode, which simply gives you hints rather than showing you exactly where everything is with an objective marker on the map. While this might sound like a hindrance, it actually turned out to be a far more entertaining way to play, as it encourages you to not only explore your surroundings, but pay attention to them on a deeper level.

When getting quests from NPCs, you’ll have dialogue options to coax for more details, like, for example, ‘where were they last seen?’, which might simply tell you to suss out the east coast or the base of a mountain. Once you close in on the objective location, you’ll summon your bird pal who you can use to scope out the area and after honing in on what you’re after, whether it’s a particular person or item, it will be marked with a proper objective marker.

My first quest was to find my friend, Markos, a kind, but somewhat skeezy businessman character who took Kassandra in as a child. It turns out he owed me money but someone else had it, so I was tasked with playing debt collector on his behalf. I had to go pick up a horse on the way to see the indebted merchant and was given three options; a brave horse, one who’s good on mountains, and another one who had a boring trait I can’t really remember. I picked the mountain horse because I’m the stubborn idiot who refuses to use paths and instead, will trek over an entire mountain to get to a destination. 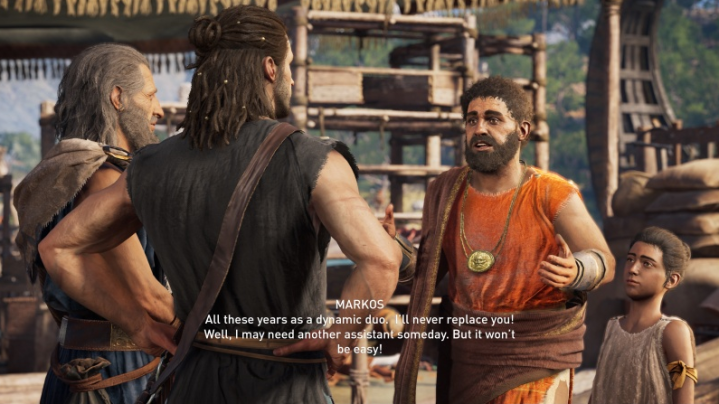 After getting my money from the asshole merchant, I carried out a few missions which involved getting my hands dirty. I particularly enjoy the stealth mechanics in Odyssey, which allow you to sneak up to enemies and assassinate them quietly, rather than taking them all on at once.

One particular mission introduced me to the mercenary system, which details those looking to cash in on a bounty placed on your head. While you can see where they are on the map, it’s easy to forget that they’re constantly stalking you. I noted this and went on with my business, but later on, the motherfucker was everywhere I went, which made completing tasks difficult. One such task was taking out a bloke and rolling him for his stuff, which was hard enough because he was level 4, as were a bunch of his guards (I was level 3 at this point). Because old mate bounty hunter was level 5 and simply would not fuck off, the difficulty was kicked up a notch.

The result was ducking in and out of combat until I was able to get what I needed and take off. It got a little frustrating at times, but it’s an interesting way to keep the game challenging. 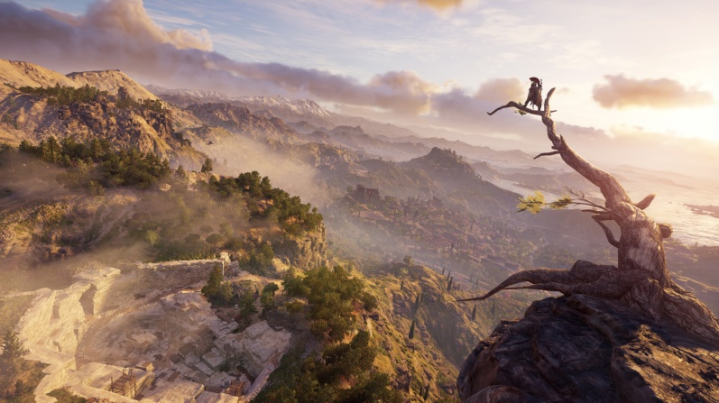 Another grievance for me was being randomly attacked by wolves when trying to be stealthy, which was insanely annoying. At one point, I was trying to sneak up on a group of bandits but was sprung when a wolf came out of nowhere to grief me, leaving me to fight it and the bandits I was trying to stealthily take down one by one.

As I progressed, I was able to unlock abilities like controllable arrows and powerful combat moves, the former of which was incredibly fun to use and a great way to pull off stealth kills from a distance.

The power of choice in Odyssey is also a big part of the title, and while we haven’t been explicitly shown end results, it looks as though your choices could have enormous consequences in the latter stages of the game. I was able to choose from different dialogue options throughout my playthrough, some of which altered the actions I made moving forward, like deciding whether to kill or spare some characters. Hell, you can even flirt with people to get what you want. 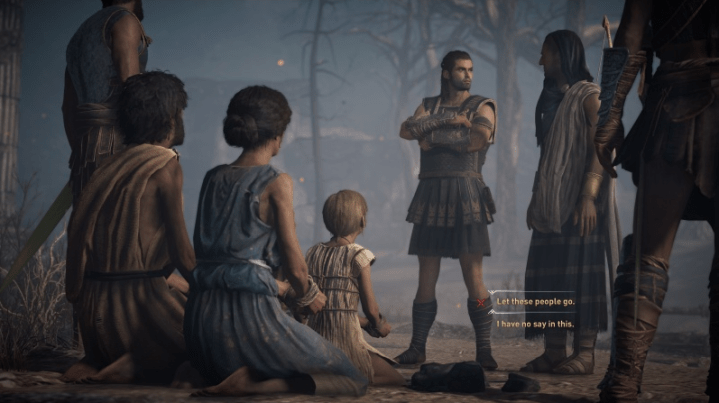 You can also check out the latest trailer for Odyssey below.

All in all, Odyssey looks to be shaping up as an excellent addition to a long-running franchise. I’m certainly keen to pump at least 50 hours into it when it’s released on October 5 for PS4, Xbox One, and PC.