Spoilers, lots of them, ahead.

I love stormtroopers, they’re an integral and truly beloved part of Star Wars. But two of them dared to beat Baby Yoda repeatedly in the opening of The Mandalorian season finale, which means they all must die now. Sorry, I don’t make the rules.

I’m going to talk a lot about episode 8 now so consider this your final spoiler warning.

The last episode of season 1 is directed by Taika Waititi, which makes a lot of sense once the end credits start to roll. I’m going to skip past the beginning because there’s a lot to discuss. Actually, I can’t wait any longer, I’m spitting it all out – we see Mando’s (Pedro Pascal) face, we learn his name, Moff Gideon (Giancarlo Esposito) has a fucking Darksaber, Mando flies, Baby Yoda does the “hand thing” as Greef Karga (Carl Weathers) calls it, Cara Dune (Gina Carano) does not fuck around, IG-11 (voiced by Waititi) sacrifices itself for the team, I cry, um, um, um, and Baby Yoda uses the Force to push back a wave of fire. OH, and The Armorer is a badass. But you already know that.

Alright, from the start now.

The episode kicks off in the most traumatic way possible – with two stormtroopers hitting Baby Yoda. But said stormtroopers also have a long-ass conversation, a ridiculous one that now makes sense knowing Waititi was behind the camera. Also, they use a piece of junk as target practice and miss it every goddamn time – a nod to a running joke. NOICE. The lemons are awaiting orders from Moff Gideon, who’s busy raining fire on Mando, Cara Dune, and Greef Karga back in town. Turns out Gideon knows a lot, like Mando’s real name – Din Djarin. We also get some background on Cara Dune, whose full name is Cara Cynthia Dune. We very quickly learn she was born in Alderaan, which explains why she joined the Rebellion, re: Death Star.

To save you any more trauma, Baby Yoda is rescued by IG-11, who has been reprogrammed to be a nurse droid and protect The Child at all costs. Even if it means sacrificing itself.

Why am I crying over a droid? WELL, LOOK AT HOW IT CARRIED BABY YODA THROUGHOUT THE EPISODE. 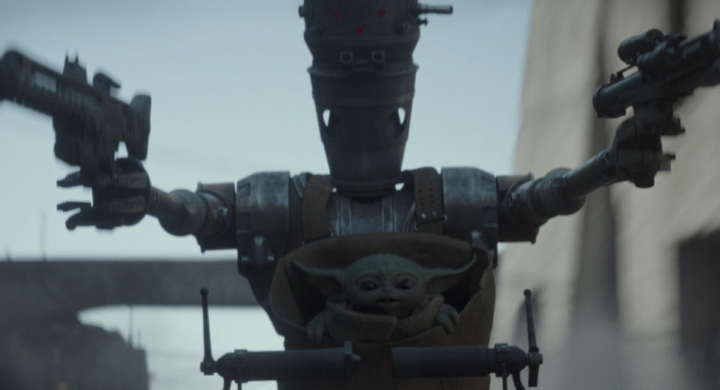 Okay next: Gideon threatens to murder everyone by giving them a taste of his [checks notes] E-Web heavy-repeating laser blaster unless they surrender. But Uncle IG-11 rocks up and kills a bunch of stormtroopers and the fight back begins. Until Gideon shoots up his laser blaster and it explodes, flinging Mando into the air and badly injuring him and his head. Mando is stubborn, in case you haven’t noticed, and won’t accept anybody’s help because it would mean taking off his helmet. Baby Yoda can’t Force-heal him either because it used its energy to completely destroy a flame trooper. RIP. You tried.

The crew, minus stubborn Mando and IG-11, retreat into the sewers to find a way out. AND THIS IS WHEN SOMETHING REALLY SWEET HAPPENS. IG-11 tells Mando it can heal him, and that Mando can take off his helmet because technically it’s not a “living” being, so Mando’s honour is saved. And before Mando can say anything, IG-11 takes off his helmet. AND BAM, we have a face after eight long weeks.

It’s like when Kylo Ren took off his helmet for the first time in The Force Awakens and I loudly went “oop” in the cinema, during a midnight screening, in dead silence, and my brother disowned me. 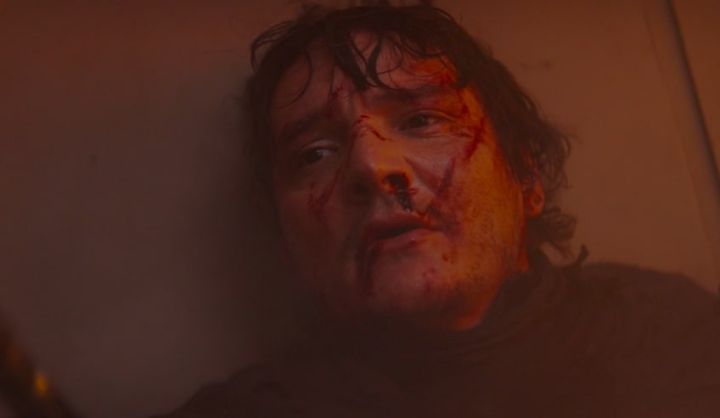 Anyway, IG-11 applies the life-saving bacta treatment, and off they go to the underground hideout where all the remaining Mandalorian warriors live… except a whole bunch of them are dead now. The Armorer is still alive and, after seeing Baby Yoda, tells a tale of the Force and the Jedi. She says that the wee tyke must be returned to the Jedi, but in the meantime Mando will be its father. Baby Yoda is now a Foundling. This entire scene sets up season 2. Also, I get to call Mando Daddy now. Excellent.

In the next scene, IG-11 self-destructs – I don’t even want to talk about it, so we’re forging ahead to when Mando, Dune, Karga, and Baby Yoda are back in the open and Gideon is in a TIE fighter trying to kill them. Daddy Mando activates his jetpack, flies into the air, sticks a bomb to the wing, and sends Gideon crashing to the ground. He obviously isn’t dead, but it’s still a satisfying win for Mando and the team. Yes, I’m rushing to the end. I want to talk about the Darksaber goddamn it.

As the season comes to a close, we cut to the ruins of Gideon’s TIE fighter. Scavenging Jawas are sussing it out until suddenly, a giant hole is being cut from the inside. Out comes a really pissed off Gideon – a black-bladed lightsaber in his hand. I lose my shit. End scene. 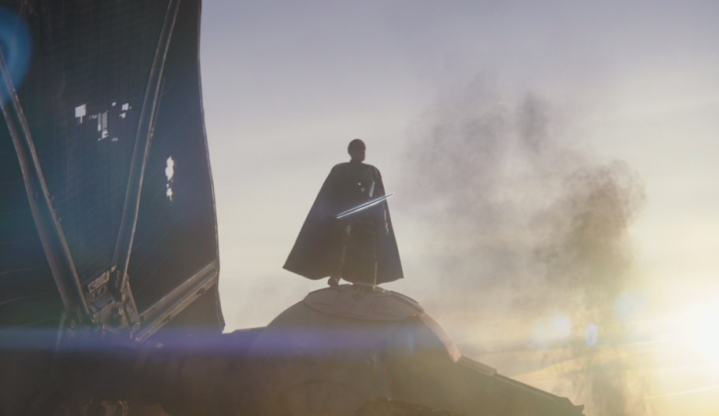 Call it bloody fate, but I’m currently in the middle of rewatching The Clone Wars. And guess what episode I just watched – The Mandalore Plot, the very same episode the Darksaber appears in for the first time (animated though). Really good episode if you’re looking for context here but the general consensus of the Darksaber is that it whips ass. It was created by Tarre Vizsla AKA the first Mandalorian to become a Jedi. I need to rewatch ep 8 to see if there’s any mention of Vizsla but HOO BOY, I’m excited, and I have a lot of questions.

never in a million years did i think we’d get to see a darksaber in live action star wars #themandalorian pic.twitter.com/MhIRNLTkMn

HOLY SHIT THE DARKSABER?!?!?!?!?! I AM FREAKING THE FUCK OUT RIGHT NOW CHAPTER 8 #TheMandalorian

#TheMandalorian I CAN'T BELIEVE WE JUST SAW A LIVEACTION DARKSABER!!!!! I just remember as a kid seeing it for the first time in the Clone Wars and the unapologetic fangirling that happened literally ever since that moment. This is the best thing ever! pic.twitter.com/76OMwi5JRd

That moment you realize you have to wait an entire year for season 2 pic.twitter.com/bCPFCjJpdh

WAIT, I ALMOST FORGOT ABOUT THIS. 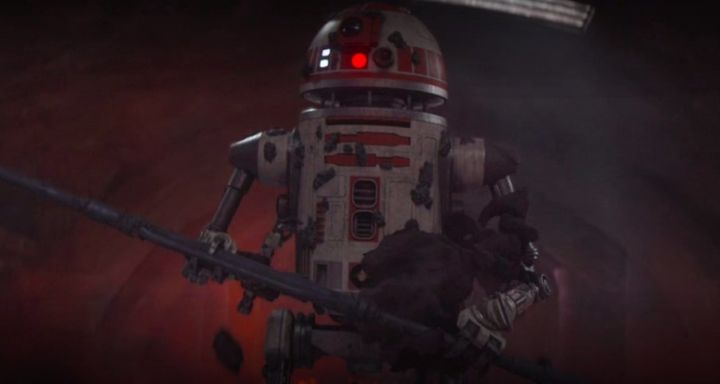 This episode was too much, I need a lie-down.

READ MORE
Happy Holidays, I Can't Stop Singing 'Toss A Coin To Your Witcher'
READ MORE
Of Course 'You' Season 2 Is Even More Supremely Fucked Than The First One