A Quiet Place is currently scaring the shit out of film critics and advanced screeners around the world and soon it’ll be our turn come April 5 in Aus. Some people are gonna watch it because power couple and total love birds Emily Blunt and John Krasinski star opposite each other while others are keen AF because apparently, it’s the scariest movie so far of 2018.

If you haven’t seen the trailer, here it is below.

So in case you’re a total wimp, like me, and covered your eyes during most of the trailer then here’s the premise of the film.

A Quiet Place is about your typical family of four just living life the best way they can… in complete and utter bloody silence because a mysterious and utterly terrifying creature that hunts by sound threatens to slaughter them one by one.

So you know, if you hate jump scares – you’ll probably really hate but love this movie.

In all seriousness though, the movie’s racking up the likes with Digital Spy saying it’s “easily the scariest movie of the year so far” and scored it a nice 4/5 stars. This particular review also had this bad boy in it,

“A Quiet Place is a very stressful watch from start to finish, though it doesn’t resort to cheap scares. Instead, Krasinski’s managed to craft a highly emotional film with characters you care deeply for.”

A horror film you get attached to – can you not, John.

Shock horror, the movie’s also doing brilliantly with other critics after premiering at the SXSW Film Festival earlier this month. It currently scores 100 per cent (based off on 33 reviews) on Rotten Tomatoes which is a pretty huge deal considering the people votin’ can be a darn savage sometimes.

Here’s some of what the reviewers on Rotten Tomatoes had to say. 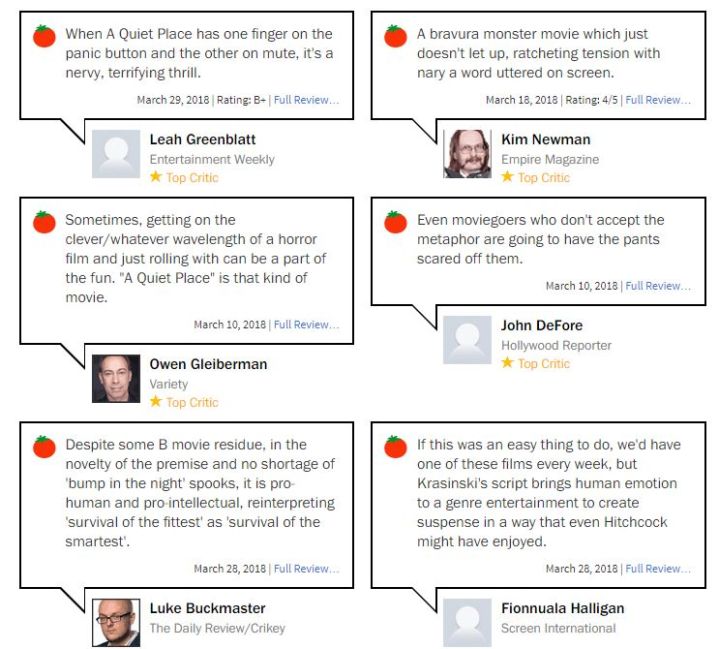 I repeat, “When A Quiet Place has one finger on the panic button and the other on mute, it’s a nervy, terrifying thrill.”

Let’s be real though, as much as we trust a good film critic we also want to know what the people think so here’s what Twitter‘s saying after seeing the advanced screenings.

Just got home from seeing A Quiet Place and I enjoyed it a lot. Check it out if you love tense horror.

a quiet place…. holy shit, john krasinski done diddly fucked me up…. i fucking stan a man of talent

REALLY enjoyed #AQuietPlace.
Was a ball of nerves throughout all 90 minutes of the film.
Am a big fan of serious actor/director John Krasinski. The man can seemingly do everything well

Oh I whole heartedly recommend #AQuietPlace!
You better not be opening those chip packets because it really is one where you hold your breath a lot!

Stop what you're doing and make it a priority to see #AQuietPlace. Such a remarkable film. Emily Blunt is mind blowing. 5 STARS MARGARET.

Had an odd double feature this evening of #ReadyPlayerOne & an advance screening of #AQuietPlace and since the internet is flooded with RPO takes, let me take this tweet to tell you; if you love effective suspenseful horror w/ well done creatures, see A Quiet Place in the cinema

So, what can we surmise from that? You’ll shit your pants but it’ll be worth it and everyone in the movie’s too talented.

I can’t even handle the trailers for ‘A Quiet Place’

Oh yeah in case you missed it, the film’s directed and co-written by John so yep, the power couple just keeps on powering on.

READ MORE
Prepare To Be Sad, The Weeknd Just Dropped A New Album 'My Dear Melancholy'