I’m recapping the No Activity Christmas special, The Night Before Christmas, written and directed by Trent O’Donnell, and available exclusively on Stan, because my life felt bereft without being able to write about Bachie 24/7.

We open with Genevieve Morris aka Carol in dispatch immediately reminding me why the Aussie original is so much better than the US remake (don’t be mad). She immediately captures something about this fine country and the warped way we speak and think about Christmas/everything – it’s a particularity, and a sense of making fun of an entire national identity, that isn’t quite there in the US one.

Carol’s miffed she’s on prawns this year, which is so goddamn real if you too come from the kind of fam I do, where one aunt is in charge of dessert and turns up with custard (NOPE) and the seafood selection is always the most spenno. There is no Aussie Christmas without prawns. Just thinking about Aussie Xmas and prawns has me really feeling the ‘White Wine in the Sun‘ vibe, even though I’m in my office rn. This could Chrissy special could  turn out to be as much of a viiiiiibe as A Moody Christmas, except with more emotionally revealing conversations about nothing.

Anyway, quickly Carol and April (Harriet Dyer)’s dynamic is restablished – a kinda mother-daughter vibe without the blood relation, where you love the other so much but they also irk you. Carol suggests April – since returning from more active duty to dispatch – has been a “really negative arsehole“. What’s at the centre of this is that April’s not into Christmas, which Carol finds both baffling and sanctimonious.

A counterpoint is obviously Darren Gilshenan‘s Detective Stokes, who fkn loves Christmas. The dude is basically an ad for festive cheer. He is your uncle who LOVES havin’ you kids over, and starts pouring the Baileys as soon as night falls. And Patrick Brammall‘s Detective Hendy is a real grinch, nonplussed by the festive season.  To think he would knock back a tattoo from Stokes’ not-stepson who hates him. Hates him so much in fact that he tattooed Stokes with a number of crude things, the best of which is just ‘GFY’, which yeah, looks a lot like ‘GAY’ on his forearm. Because Stokes is deliberately, sweetly ignorant, he genuinely believes it means ‘Good for you’. There was no need to crush this self-perception. 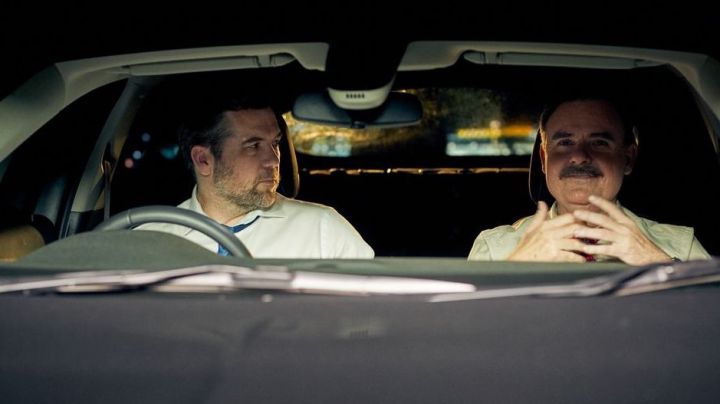 Miranda Tapsell features as herself – this year, like Rose Byrne and Damon Herriman before her – she’s kidnapped by Jimmy (Dan Wylie) and Bruce (David Field), who are posing as a department store elf, and Santa, respectively. Bruce reads a letter to Tapsel assuring her they mean no harm to her: they’re actually feminists and this whole hostage thing is simply a “business opportunity“.

There you go, there’s our cast of Aussie comedy heavy hitters who imbue this whole thing with a weird sense of emotional truth. Like amidst what is largely banter and esoteric Australianisms in a fruitless Waiting for Godot scenario is this core of good friends who are just trying to process the shit that’s going on in their lives.

Stokes and Hendy are surveying again – and Hendy truly resents his position as a stakeout cop. Like he hates it. All his fury, misdirected at Stokes, is at his own lack of success in his career.

Bruce explains that the aim of their hostage situation is to extort “all the channels“, such is Tapsell’s ubiquity on Aussie screens. Jimmy is not convinced by this plan.

Carol’s face while watching April send her dad phone kisses is an absolute moooooood. She is so deeply unimpressed/almost disgusted. April explains that her fam never really got presents, celebrated Christmas or birthdays. Carol shatters her fundamental sense of self and family by pointing out that’s because her dad is a gambler on the greyhound races.

Jimmy’s sob sorrow story turns up early too – he’s an orphan, and thus has never had a full Christmas experience. And then there’s some… on-the-nose… talk about identity politics which leads to Jimmy declaring “I identify as a six-year-old boy“, and even Bruce knows that’s cooked. But it’s almost touching when Bruce agrees to don his full Santa regalia and let Jimmy sit on his knee. When asked about his wish, with a distinct lack of irony Jimmy says: “I don’t want anything. This is enough.“ 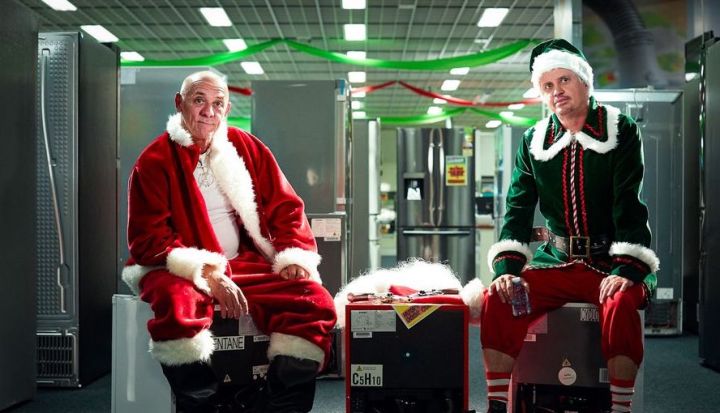 We’re back in the undercover stakeout vehicle with Stokes and Hendy – and Hendy is describing his new word, ‘Santaflections’: “when we assess and reflect on the things we’ve achieved or not achieved in some cases from the time Santa visited last to the time Santa is about to visit now“. Hendy’s character is basically to shit on Hendy’s beautiful optimism.

Meanwhile April has decided to address the way Carol uses overcoming cancer as a weapon – she’s apparently mentioned in “20 times“, which isn’t fair considering April’s “not allowed to talk about The Bachelor anymore“. I have never identified with anyone more than April at this moment. 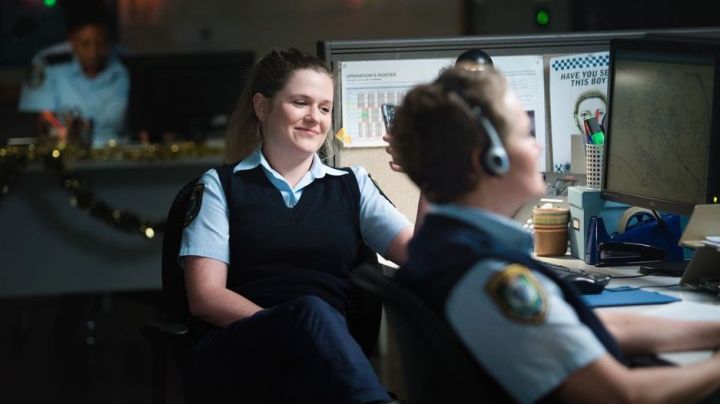 As a siege is set up around them – the hostages managed to text police – Bruce has his vulnerable moment, admitting that there’s “no ransom money coming” because this kidnapping is in the name of love. It’s a grand gesture to win back his wife, from whom he’s separated, because she is a huuuuuuge fan of Tapsell’s. He seems to earnestly believe a call from Tapsell to his ex will “change my whole destiny“.

We’re back with April and Carol, and Lee (Alan Dukes), who Carol despises for an unknown reason. He’s come over to give ’em savvy b, and this is how she thanks him? Through a frank discussion with her partner in dispatch, Carol realises that she actually is “a bit sweet on” Lee. To the point that she ends up straight horndogging on him as he rolls away, because of his nice forearms. 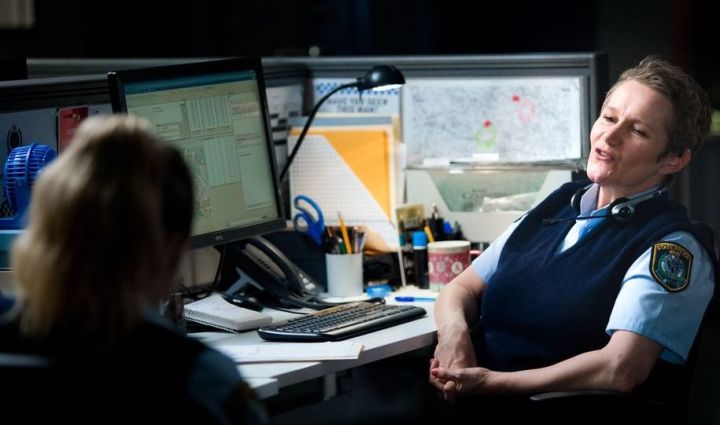 Sceptical Hendy’s constant negativity is really bumming out the Chrissie cheer here, and he does not respect his partner’s earnest belief in Santa. Stokes claims he found a list of celebs who believe in Santa on the dark web, featuring Scott Baio, Kieren Perkins and Robert Palmer. If only this was what the dark web is truly for. To prove his point about Santa’s existence, yet again, Stokes has purchased a gift for himself that he’s passed on to Hendy, by way of Santa. So Hendy keeps the egg timer for spite. I wish Tim Minchin‘s security guard from S1 was here to liven this up.

Miranda Tapsell is deeply unimpressed by the scheme to win back Bruce’s wife, and demands to be told more about the career crim as a person. Jimmy struggles, calls him “gentle sometimes“, a fair and honest summation.

Lee turns up with bubbles so April invites him to Xmas lunch on her behalf. His tragic story – his legs, his mum’s struggles with dementia – actually hurts my heart. And there weird casualness but secret excitement about spending the holiday together is deeply sweet, and I’m glad for this emotional closure. A wholesome love story is perf Xmas special fodder.

Tapsell does ultimately agree to call the ex and they speak – but they have to prove it’s really her, so they take a would-be incriminating shot of her and Jimmy. Like her gag is still around her neck. It does impress Bruce’s wife – but the real clincher is him pretending to tell the truth about what happened to one of her estranged family members. He pegs it all on Jimmy. 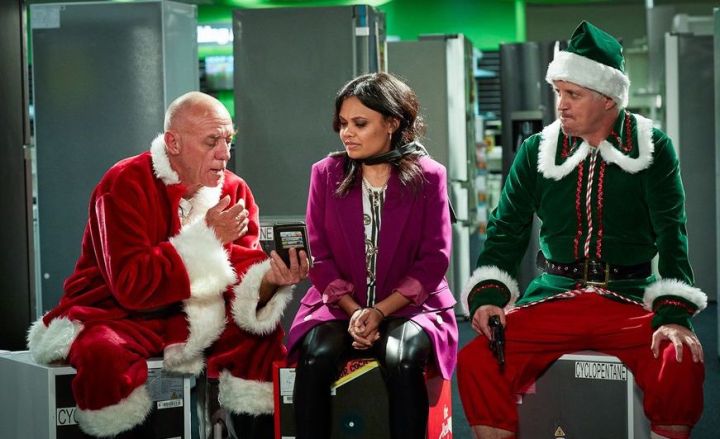 I’m looking forward to revisiting Carol and April’s champers-fuelled karaoke sesh, but it’s SEIGE TIME, featuring an underused Xmas song, Elton Duck‘s ‘Christmas‘. And of course the lads ignore instructions and head inside, which will fuck up everything and let the baddies go free, because we identify with the baddies and Stokes and Hendy have to fail, it is in their very nature.

Of course Stokes comes face to face with Santa/Bruce and is very easily swayed into being a “good boy” and letting Santa leave. The dude truly believes in the purity of Santa – why would prey upon his vulnerability? And they get out of there, easy as, nicking the empty undercover cop car.

Hendy is “upset about the car and I’m upset about Santa“, and he sulks some more, and we get it, you think you’re a better cop than you are. 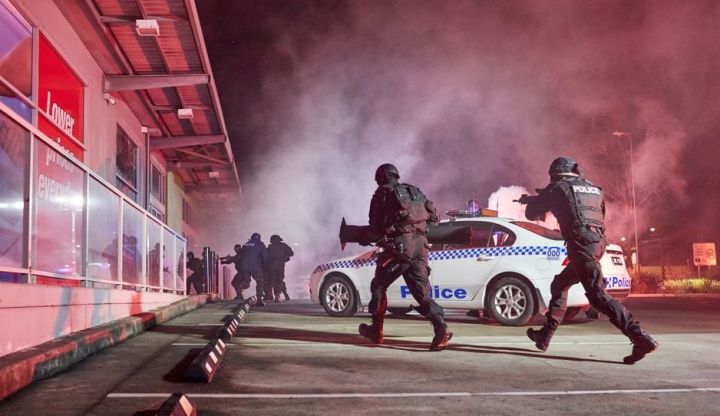 And so we’re seen into the credits with April and Carol singing and riffing on ‘Little Drummer Boy‘, and that, that drunk carolling just sums up what Christmas, and what this Xmas special can be.