The worldwide release of Neon Genesis: Evangelion on Netflix has meant that the iconic series is much more publicly accessible — but as fans have quickly discovered, a lot has changed. To add insult to the injury of losing the iconic covers of Fly Me To The Moon from the series’ end credits, Netflix’s release of Evangelion has also made several subtle, but critical localisation changes, including one with a momentous impact on the final episodes.

Studio Khara has copped a bevy of criticism from fans and former voice-actors, not just for the lack of Fly Me To The Moon (which is still intact for Netflix Japan viewers) but a more literal attempt to translate the original series from Japanese to English, rather than redubbing the lines in the same fashion as the original localisation.

We can’t talk about what’s changed without getting into heavy spoiler territory, so again, if you’re still watching Evangelion and Shinji for the first time, bookmark this and come back later. Otherwise, spoiler ahoy.

The localisation versus translation debate can be tricky. Many sayings and phrases in Japanese (and other languages) often have no direct comparison in English, or their literal translation makes no sense due to grammar, or simply a lack of context. In these instances, studios will often convert the Japanese lines into something that conveys the original meaning as much as possible.

The most impactful instance in Evangelion is the Kaworu-Shinji relationship, where the former enters the picture as the fifth child following Asuka’s mental collapse. Kaworu immediately strikes up a comfortable and intimate relationship with Shinji. Shinji, who’s never had any real friends and has difficulty connecting with anyone amidst the calamity of the Angels and being an EVA pilot, doesn’t know initially how to respond.

It’s a real moment of growth for Shinji, especially after — in the original translation, at least — Kaworu tells Shinji that he loves him. It’s been debated in the past whether there’s something romantic or sexual behind that gesture, or whether the love is merely symbolic. For what it’s worth, Vox has pointed out that Hideaki Anno, Evangelion‘s creator, said in a 1997 interview released in an Evangelion companion book that “Kaworu was the first friend he could open up to, and he could also be someone that could be a same-sex partner”.

Readings differ from this point whether Kaworu wanted anything physical, but what’s key is Shinji’s intent and establishing that connection with someone as a friend, and then exploring feelings beyond that. As he tells Kaworu afterwards, nobody’s ever told Shinji that they loved him — Gendo hasn’t, explaining 99 percent of Shinji’s problems — and he’s never had that depth of reverence for anyone before, not Asuka (although End of Evangelion complicates that a little, depending on your reading of that scene).

But in the Netflix Evangelion release, Kaworu simply tells Shinji that he likes him, rather than love. That’s backed up in a follow-up scene, where Shinji reflects on what Kaworu said, which again has a completely different tone.

sorry but this is not ok (right is from the new netflix eva script) pic.twitter.com/LehJYFjMng

Dan Kanemitsu, the translator credited on the Netflix Evangelion release, told a fan last week that he “tried my best to be faithful to the original source material”.

“The power of storytelling sometime depends on the ability of audiences to establish emotional relationships with the characters, as well as, recognise intimacy between people based on inferences,” he said.

It is one thing for characters to confess their love. It is quite another for the audience to infer affection and leave them guessing. How committed are the characters? What possible misunderstandings might be talking place? Leaving room for interpretation make things exciting.

But is the more literal translation an accurate one? The Neon Genesis: Evangelion manga, which was published in the West through Viz and is still available locally, was pretty explicit.And it’s not the first time people have told Shinji — or at least indicated — that they like him either: he’s aware that Misato is always looking out for him, and after initially beating his arse in the first act, Toji and Kensuke are by Shinji’s side to the end.

That’s not the only adjustment made in the Netflix release, though. Swearing has been removed from the Netflix localisation, which makes sense from a purely literal standpoint: Japanese doesn’t have curse words the same way English does. There’s other ways of conveying a similar meaning, but that lack of a word or phrase that cuts through is why the original localisation featured the line “I’m so fucked up”.

Now, that same line is “I’m the lowest of the low”. (See the original scene here.) 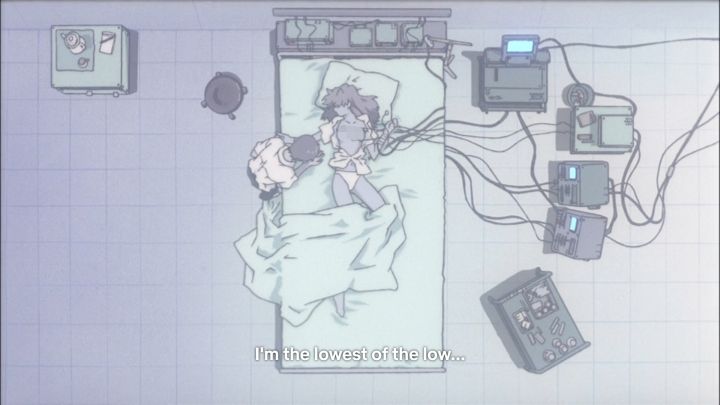 Given the context of what’s happening here, there’s no doubt which line has the stronger weight. It’s the only time in the original Western release that a swear word is used, and given the fact that Asuka is unconscious and Shinji’s behaviour qualifies as sexual assault, the original localisation is miles more appropriate. That’s not to say there isn’t a lot of weight underneath the scene — there’s an interesting reading of the scene being a meta commentary on otaku culture and the objectification of nuanced, complicated characters, as well as the scene serving as the basis for Shinji’s depression throughout End of Evangelion.

The literal translation has also cut out other beloved bits, like Asuka’s German when we first see her in Unit 02’s entry plug, or introduced some grammatical errors for the sake of correctness. 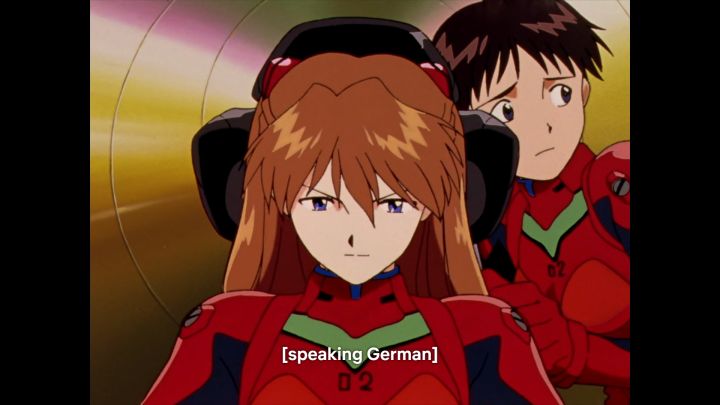 In the first episode, where Misato hurriedly ferries Shinji to the NERV base for the first time, she describes herself as an “international civil servant” instead of a government employee or government official. Shinji’s referred to as the Third Children, rather than the Third Child, which matches the original text despite the grammatical oddity.

Fans are keeping track of the full list of changes and quirks on the official Evangelion sub-reddit, and unsurprisingly, people aren’t thrilled about most of them. The standing recommendation is to watch the original anime by some other means, especially for the Fly Me To The Moon covers at the end of every episode. Evangelion is still well worth a watch if you don’t have that option, though.