Kurt Russell Deserves A Goddamned Oscar For ‘The Christmas Chronicles’

Saddled with the task of reviewing The Christmas Chronicles by my editor – part of our on-going series of automasochistic bad Christmas movie reviews being willingly taken up by the PEDESTRIAN.TV editorial staff – I had fully prepared myself to spearhead a call for Kurt Russell to be anointed with all the industry awards imaginable; a deliberately sensationalist contrarian take aimed at mining cheap hate-clicks en masse; the kind of yarn that ordinarily pops up on your Twitter feed from a heretofore unknown outlet named Hoot dot org that you break your mouse clicking on because the headline is some objectively wrong assertion stated as fact like “The Big Cow Is Not That Big, Actually” or “All Socks Are Shoes” or “Waluigi Has Never Fucked.”

But after viewing The Christmas Chronicles on Netflix I find myself in a strange position I simply was not prepared for:

I cannot joke about Kurt Russell deserving an Oscar for this anymore.

Because now I actually believe he should get it.

Kurt Russell completely deserves an Oscar for his turn as Santa Claus in The Christmas Chronicles. He deserves every bit of it. It is a tour de force performance. It transcends the genre. It is Wellesian in its thespian magnificence.

READ MORE
CONFIRMED: 'The Holiday Calendar' Is An Absolute Turd And You're Gonna Love It

And I say this, 24-hours removed from having viewed the film, for three key reasons:

Far from being the kind of trashy Christmas fare you watch for a cheap lark, The Christmas Chronicles completely owns. Every single second of it slaps.

The film follows 10-year-old Katy Pearce (Darby Camp) and her troubled older brother Teddy (Judah Lewis), whose dead firefighter Dad has put them on a path to a miserable, mundane Christmas. But after the pair of them manage to capture the actual Santa Claus on film (using an eleven-year-old camcorder because no one in this family is aware of smartphones apparently) the kids nearly ruin Christmas for everyone by stowing away on Santa’s sleigh and startling him into a near-fatal wreck; one that sends the infinite sack of gifts hurtling into a tree somewhere in Chicago, and sets wild, flight-capable reindeer loose on the city’s streets.

From there, it’s a race against the clock to get Santa’s shit back together in time for Christmas Spirit to be restored and for the final raft of gifts to be delivered in North America. 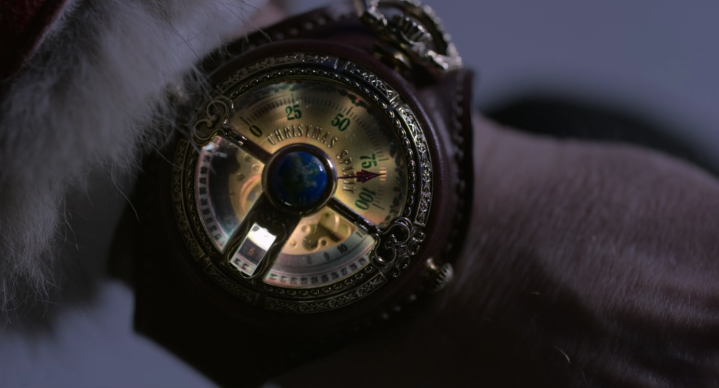 the official Spiritometer, as it were

The Christmas Spirit aspect of the plot is quite important, as it turns out. The film posits that the peaceful harmony of the world is maintained purely by the presence of Christmas Spirit, which is itself completely reliant on Santa successfully completing his yearly deliveries. All wars, famine, and civil unrest throughout modern history history are a direct result of an aborted Christmas run. Tell me another movie where the stakes are as perilously high as that? Independence Day didn’t. 2012 could never. Not even War of the Worlds dared flirt with the concept of a seasonal joy-deprived world caving in on itself. The film flirts with this by teasing levels of Spirit that drop by the second, an event that causes Chicago local police precincts to suddenly fill to capacity when crime in the city – in Chicago – skyrockets. The threat of failure in The Christmas Chronicles is real, and its consequences dire.

Not a single second of The Christmas Chronicles relents in its breakneck pace. It is the Andrew WK of films; all action, all purposeful, all soul-affirming. Even a third-act group of unnamed goons who abduct Teddy and threaten to throw Santa’s recovered sack into a furnace have meaningful purpose. That purpose being to have the holy gobshite smacked out of them by Santa’s rabid elves in a scene which culminates in the animated Yuletide helpers coming within a Rudolph’s nose of cutting Teddy’s balls off with a chainsaw.

Personally, the threat of elvish castration seems like a far more effective deterrent than a lump of coal under the tree, if you want to split Naughty List-related hairs about this.

2) KURT RUSSELL IS THE GREATEST SANTA IN CINEMA HISTORY

The real meat and bones of this issue is that Kurt Russell is a miracle in this movie. Far removed from the chaste, holy depictions of the fat man in red, Kurt Russell shines as Santa’s previously untold perfect form: A shit-stirring, wise-cracking hardass whose layers of protective clothing conceal what I can only assume to be a rig chiselled from granite. The guy spends his entire year performing manual manufacturing work but has one publicised cheat day a year and has to cop rotund depictions in pop media as a result? Give me a break.

Russell buys into the character so hard it’s difficult to picture anyone ever living up to the now-lofty mantle. He lights the screen up brighter than any Christmas Tree you’ve ever seen. Tim Allen is ass compared to Russell here. Tim Allen is ass in general, but a much more concentrated ass when the two Papa Noel performances are held up against each other.

READ MORE
'The Princess Switch' Is A Horror Movie

That it’s taken this long for a true depiction of Santa Claus boggles the mind. The Annual Giftman is world travelled, is a finely tuned moral compass, and has done and seen everything. Russell, in playing Santa here, finds a balance between sweet benevolence and vague, sarcastic menace. The exact middle ground on an extremely long scale that stretches from Mister Rogers on one end to Anton Chigurh at the other.

Plus while driving a stolen muscle car (The Christmas Chronicles is the only movie smart enough to point out that Santa commits billions of break-and-enters every Christmas Eve so in no way at all is the Arctic Bitch above doing additional crimes) Russell drops the singularly coolest action hero line of 2018:

Let’s see any of the Marvel nerds top THAT.

The Best Actor in a Supporting Role Oscar absolutely loves itself some gussied up old man shit. It loves itself some of that absolutely sick. Almost every year, without exception, the category is populated by dusted-off once-were actors who in the decades since their prime have added wrinkles and withered emotional depth to their range.

Christopher Plummer, Michael Caine, Alan Arkin, and J.K. Simmons have all picked up awards in the category either at, or beyond, the age of 60. While Richard Jenkins, Sylvester Stallone, Robert Duvall, Robert De Niro, and Jeff Bridges have all sat in recent nomination lists. And if Jeff Bridges can do it, then Kurt Russell sure as shit can too, because there is no more bargain bin, low-rent version of Kurt Russell kicking about Hollywood than Jeff Bridges, and if you need me I’ll be happily dying on this hill.

Kurt Russell has been ably contributing to Hollywood since the mid-1960s without so much as a whiff of stale breath in his direction from the Academy. Why not now. And why the hell not for a role as Santa Claus?

In a world filled with untold horrors in every news bulletin, what better symbol of hope is there than rewarding a man for looking at a role that most other “respected” “actors” would thumb their nose at, and not only taking it on but kicking its dick in?

For these reasons alone The Christmas Chronicles is simply a must-see in this and every Christmas season.

And I didn’t even breathe a word about the sequence where Santa gets arrested and thrown in jail but somehow pulls everyone together for a prison cell blues musical number with Bruce Springsteen guitarist Stevie Van Zandt aka Silvio Dante from The Sopranos on lead guitar. 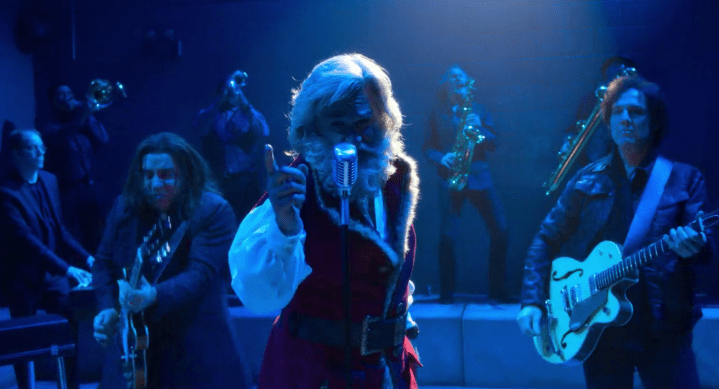 Because that definitely happens as well.

Give Kurt Russell an Oscar for this movie immediately. Thank you.

The Christmas Chronicles is available on Netflix.