Insatiable – that… interesting Netflix show that attracted a shit ton of controversy is currently attracting a shit ton of extremely poor reviews.

In short, the show stars Debby Ryan as Patty, a high-school student who is brutally bullied for being overweight. Then, in an unrelated incident Patty is punched so hard in the face she’s sent to the hospital to get her jaw-rewired, and while there, undergoes a body transformation.

Now slim, Patty returns to school and is immediately popular so with her newfound ‘power’, Patty plans to get her revenge on every single student who made life for her a living hell.

The trailer alone sparked fury with fans claiming the show promotes fat-shaming and revenge bullying. Thousands took to Twitter to voice their disgust – almost 230,000 people signed a change.org petition demanding Netflix to take down the show.

In response to the criticism, showrunner Lauren Gussis and Ryan defended the show writing it actually confronts the ideas of fat-shaming and gendered beauty standards through satire and comedy.

Insatiable hit the streaming giant today and to coincide with its release, the show’s reviews have been appearing on the web, each not the biggest fan of the series.

Vox’s title sums up their review: “Netflix’s Insatiable is somehow both obscenely cruel and terminally dull.”

Vulture described the show as “an utter disaster” and then really tore it a new one with:

One season of this show makes me feel nauseated enough to know I definitely don’t need to sample any more. That’s not because I’m worried about too much bingeing. It’s because I have some taste.

The Hollywood Reporter put it simply – “The Bottom Line: Not Very Good” although THR wrote there was some “good news” being that its “fat-shaming is only one of its many problems.”

Variety described the show as “a dozen different and equally bewildering shows happening all at once – and not a single one knows where its strength might actually lie.”

…and then you get to Rotten Tomatoes where Insatiable currently holds a rating of 7 per cent. 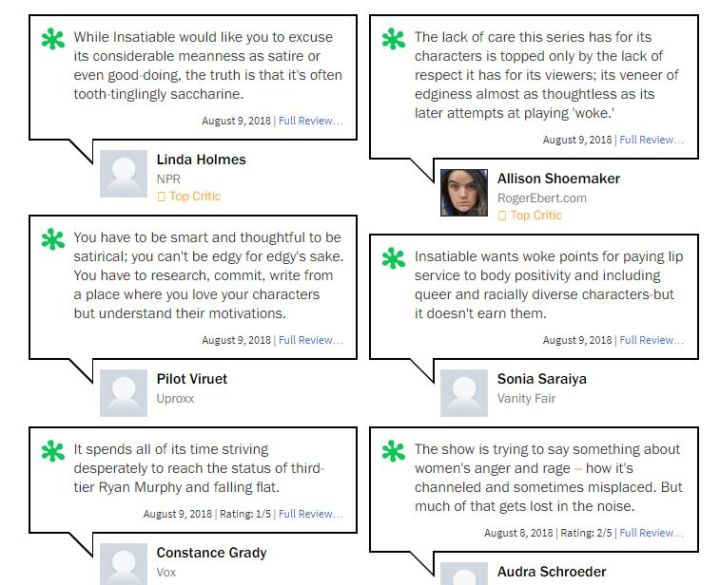 Out of those 14 reviews on RT, there was one positive one from CNN.com which reads: “Insatiable is an unexpected little gem, a series so floridly over the top as to feel like a send-up of 1980s soap operas on 21st century steroids.”

Insatiable is available on Netflix, now.