‘Hill House’ Jump Scares Ranked By How Rudely Unnerving They Are

Safe to say, there are a lot of spoilers ahead.

By now, I’m sure watchers of Netflix‘s The Haunting of Hill House have been – at least – a little freaked out. Despite being set in a haunted house, the series is far more psychologically creepy than traditionally terrifying. But, interwoven between all those lovely hidden ghostly faces and heartbreaking revelations are a few jump scares that do the job.

In the chance you’re reading this before feasting yours eyes on the series, Hill House is an adaptation of the 1959 novel of the same name by Shirley Jackson. In the series, we have the gorgeous Crain family who we meet just as they move into Hill House, an ollllddd estate the family intend to flip for some good money.

The series switches between “then” and “now” a lot as you see the direct effects of the house on the family.

Carla Gugino stars as an architect and the children’s mother Olivia while Timothy Hutton plays her on-screen husband and builder Hugh.

Now behold, jump scares in order of how… unnerving they are.

When Luke returns to Hill House after Nellie’s funeral in episode eight, he intends to burn the house down but the sudden appearance of his ghost mum stops him. Then suddenly, hands grab at his face and Luke disappears.

The creepy hands belong to the ghost of Poppy Hill, the 1920s flapper woman.

Yes, there are multiple Bent-Neck lady appearances but one of them takes the bloody cake.

The entirety of episode five, titled The Bent-Neck Lady was sad as hell. By the time we reach this episode, we know Nellie dies so, in some way, we know what’s to come. What I did not expect was for Flanagan to almost take our attention away from all the horrible horrors of Hill House as we learn of the love story between Nell and her late husband Arthur Vance (Jordane Christie).

Arthur, a sleep technician, supports Nellie through her battle with sleep paralysis and it’s during one of these episodes that Arthur suddenly drops dead from a brain aneurysm. Nellie is unable to move then suddenly, the bent-neck lady appears.

Part jump scare, part plain unnerving, part: “No, no, no oh God please no” over and over again.

It’s worse because you can’t actually see her, just her silhouette and yet it’s still so goddamn creepy.

Later in episode five, while Nellie is getting a bottle of water at the motel, the Bent-Neck Lady drops down right in front of her damn face. This is 100% a classic jump scare because a) no sound effects when she’s having a sip of water and b) BIG SOUND EFFECT WHEN SHE APPEARS.

I could not get a clear screenshot of the ‘dropping’ but here’s Nell on the ground.

Special creepy mention: that scene (you know the one) in episode six when the Bent-Neck Lady/Nellie appears at the funeral home while the remaining family members are arguing with each other.

Again, aggressive sound effect plus this thing appearing at the end of Theo’s bed – no, thank you.

But you know what’s really sad? When you realise what Mr Smiley, wearing pyjamas, pulling back the covers on Theo’s bed is supposed to represent.

This good ol’ classic scare comes right at the end of the first episode, titled Steven Sees A Ghost. I thoroughly enjoyed this scene because aggressive-disbeliever-of-ghosts Steven spends the entire episode debunking ghosts theories for his bloody ghost book only to terrifyingly face the ghost of Nellie.

At first, Nellie just appears silently in the corner of Steven’s apartment staring at him then, BAM, she’s right behind him and her face starts gruesomely contorting.

Pictured: Me when I’m hangry. 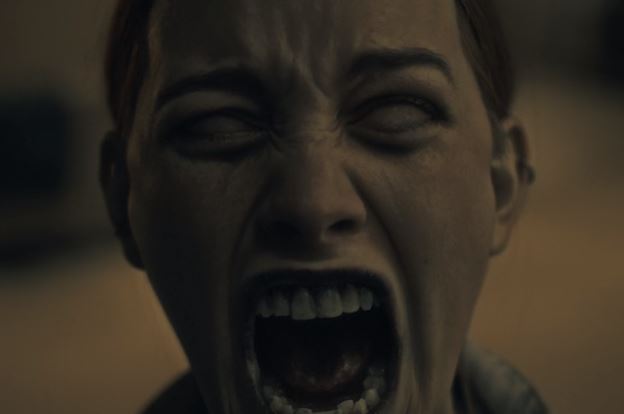 A Dead And Crawling Olivia

Alright, here’s when we start genuinely swearing at the TV. In episode seven after something destroys Shirley’s model of her “forever home”, Theo tries to quickly pick it off the ground only to cop yet another fright of her life when her dead, decaying mother – wheezing and spitting – comes crawling at her.

That Fucking Thing In The Basement

I HATED THIS ENTIRE SCENE. Why, why, the hell would Theo who has a goddamn psychic hand let her little brother go into that kitchen lift? WHY?

To be fair, little Luke thought the kitchen lift went up and not down to a basement they were unaware of but STILL. Anyway, of course little Luke has a flashlight and while pleading to “please, bring me up” he points said torch around the basement.

Rats scuttle away, dusty crates appear in the light, then of course, we see a rotting hand reach around a barrel.

(Why the hell did I agree to write this yarn up, I’m literally rewatching this scene waiting for the appropriate moment to screenshot it and HATING IT SO MUCH, CHRIST.)

Anyway, as little Luke’s flashlight starts flickering it STARTS CRAWLING TOWARDS LUKE AND GETS CLOSE ENOUGH TO TEAR HIS SHIRT.

What’s absolutely crap about this scene is that because Luke’s flashlight is flickering, every time it flashes on again the dead thing IS EVEN CLOSER THAN BEFORE.

Once again, episode seven delivers the goods right when Luke is sprinkling some dirt over Nellie’s coffin. He not only sees Nellie in her Bent-Neck Lady form standing above him but he also suddenly has his dead, decaying mother pulling at him and asking him to “please stay”.

Folks, I copped such a bloody fright I choked on my Mi Goreng.

This, this jump scare made me scream so loud that afterwards I yodelled into my pillow for a full minute because it got me so damn good.

In episode eight when the Crains are racing to Hill House to rescue Luke, Theo and Shirley get into an argument in the car because Shirley thought Theo was trying to get it on with her husband.

The argument is happening, you’re completely distracted, you’re worried about Luke then BAM, Nellie just fucking appears out of nowhere screaming at the top of her dead lungs.

The Haunting of Hill House is up on Netflix, now.