Hold onto your skulls, mates. Because some minds are about to be blown. We all know that The Good Place and Parks & Recreation has a fair amount of crossover, from cast to crew to even the series’ creator Michael Schur. But now we have irrefutable proof that not only are the shows closely related, but they exist within the same dang universe.

Beware here that there are minor spoilers for the conclusion of The Good Place season two, so if you don’t want to know the score, look away now.

In the finale of The Good Place‘s second season, Eleanor gets her memory wiped again and gets placed into a real-world simulation overseen by Michael and Janet, in which she is saved from the accident that wound up killing her.

Here, she is shown reading a copy of Celebrity Baby Plastic Surgery Disasters magazine, which is a fine publication to be sure. But one intrepid Twitter user spotted something intensely curious about the magazine’s back page.

Just discovered that The Good Place takes place in the Parks and Rec universe and now by whole brain is crying. pic.twitter.com/UjtJLSclrA

Look at that back cover. LOOK AT IT. 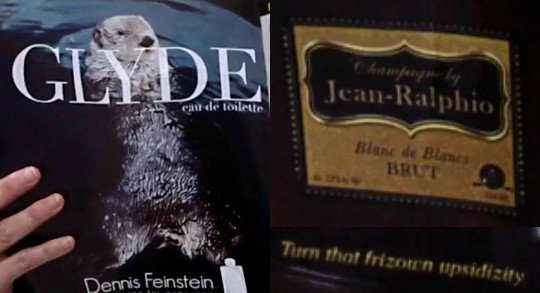 That’s an ad for GLYDE, the signature fragrance from Pawnee’s king of perfumes, Dennis Feinstein, as well as a plug for the range of champagne launched by Pawnee perennial party-boy Jean-Ralphio Saperstein, which was revealed via an easter egg in a future flash-forward during Parks & Rec‘s final episode.

While Jason Mantzoukas has appeared in The Good Place previously – alongside other Parks & Rec alum Adam Scott and Marc Evan Jackson – it seems Feinstein is the link that proves The Good Place and Parks & Recreation occupy the same canonical universe. Holy crap.

Now, to put the nerdy analytical glasses on for a moment: There’s definitely an argument to be made that, because the Feinstein and Jean-Ralphio ads appeared in a simulation of Eleanor’s real life – one constructed entirely by Michael and Janet – that The Good Place only exists in a world where Parks & Recreation aired on earth world TV, given that Michael could simply be populating the simulation scenario with information gleaned from Eleanor’s memory.

HOWEVER. The more exciting prospect is if we assume The Good Place and Parks & Rec share the same universe, because then there’s a strong argument to be made that that universe also includes both The Office AND Stranger Things.

The possibilities, mates! They are endless!

Now if we can only somehow get a scene where Chidi attempts to deliver an ethics lecture to Ron Swanson, we’d really be in business.