In an interview with TV Week, Ben Lawson spoke about his guest bit in season three of The Good Place as Tahani‘s (Jameela Jamil) Aussie love interest/a lost, neglected Hemsworth brother, arguably becoming the only character to actually pull off our twangy accent.

This is ripe with spoilers if you have not watched the first half of the new season on Netflix, which is your problem now that you’ve been warned.

Essentially Lawson was deemed so attractive that he could be cast as the “Hems-worthless” fourth Hemsworth brother “they don’t want you to know about” who Tahani used to date before she was(n’t) crushed by a statue at her sister’s Rock & Roll Hall of Fame induction. He turns up when Tahani is participating in Chidi’s (William Jackson Harper) near-death experience study in Australia, and within a year she and fake Hemsworth they get engaged. 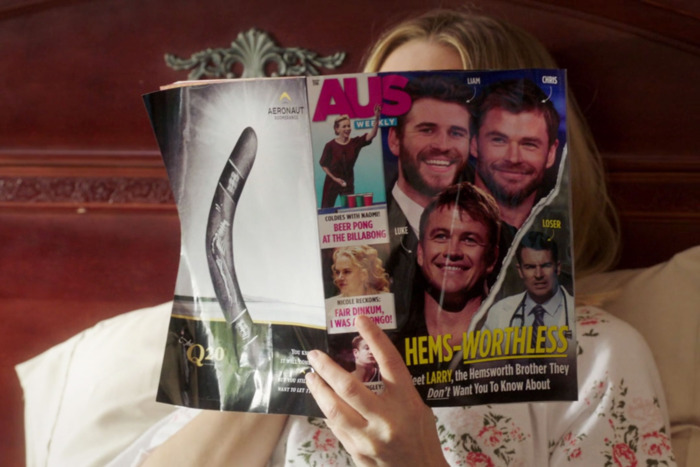 Lawson was super chuffed to be joining a cast that includes Veronica Mars herself and the Ted Danson, you know, Becker. He says he knew Kristen Bell already because of 2012-16 comedy series House Of Lies, which starred Bell and Lawson’s little brother, Josh, plus Jean-Ralphio from Parks & Rec (Josh Schwartz) and Don Cheadle.

“The cast were unreal. I knew Kristen Bell, because she worked with my brother on House Of Lies. And I’ve been a fan of Ted Danson since I can remember and he could not be nicer.“

Lawson explains his character, an accomplished surgeon, insecure because of his brothers’ Hollywood celebrity, as such:

So he’s, uh, kind of the fourth Hemsworth brother who no-one knows. He’s not in the entertainment biz – he’s like a normal guy, but because he’s not a famous movie star, he’s got a real complex about being this big loser.

Tahani thinks he’s an Adonis, but Larry just doesn’t see it. Comedy-wise, for an actor, it really let me see how far I could push that.

It doesn’t look like the last Hemsworth brother will be returning to the series anytime soon, but hey, who knows?

And if Lawson looks familiar: this year he played the complicit baseball coach in the second season of 13 Reasons Why too.